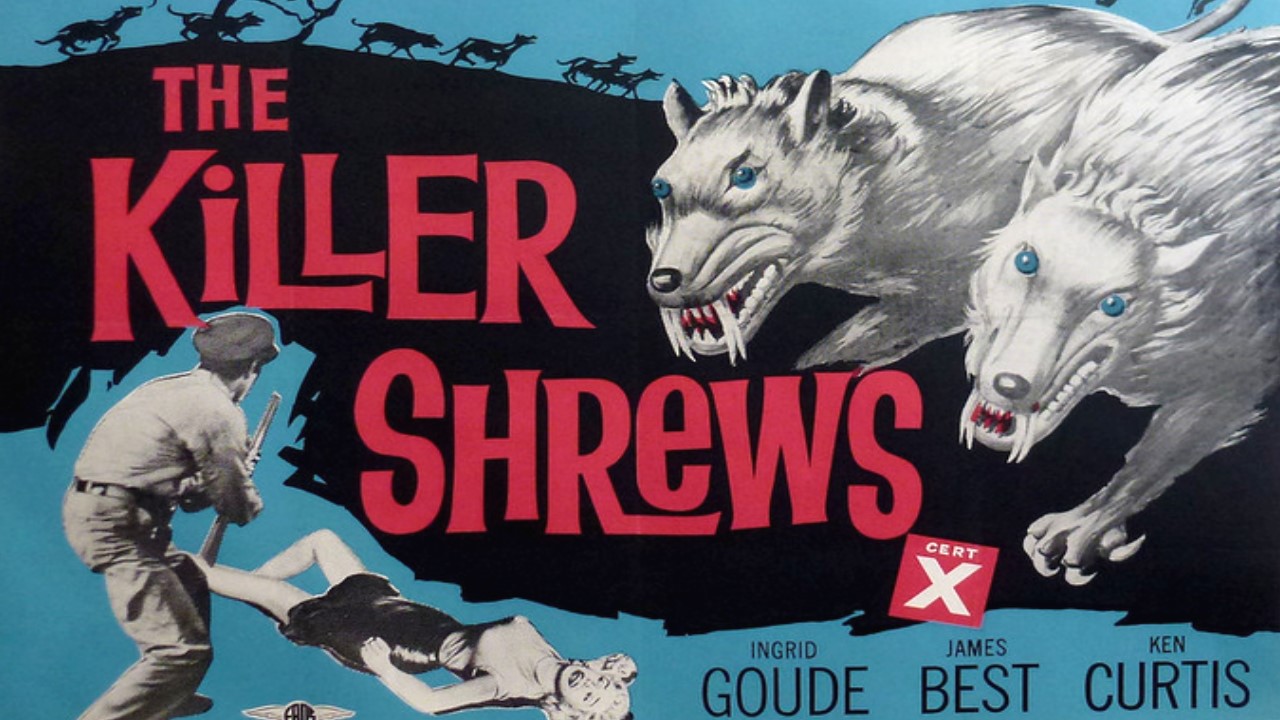 It’s time to look at a classic creature feature film from a long while back. They definitely made quite a lot of interesting titles like this in those days that’s for sure. It’s a pretty fun film for the most part although it hits the usual snags like animal violence. I’ll give the film credit for avoiding having any of this on screen for the most part but I still had to deduct quite a few points. Ultimately within the genre I would say that this one is pretty average. It doesn’t do anything particularly inventive or exciting but I do give the film props for using an animal that hasn’t been done before. There are a lot of animals out there so you may as well give each one a movie.

The movie starts off with Thorne and Rook making it to an island on their boat. They’ve been instructed to drop off a bunch of supplies and then pick up a passenger named Ann. Unfortunately the waters have been quite troubled so they aren’t able to leave til the next day. Rook stays behind to guard the ship and Thorne heads to the locals’ home. Everyone seems to be in a hurry for Thorne to leave and he doesn’t appreciate that. After someone gets murdered and everyone starts to be very cryptic Thorne demands answers. Well, it turns out that the shrews on the island have mutated into giant monsters of sorts. They’ve gone from tadpole size to dog size. This is all due to experiments and as an added bonus they also have an incredible amount of poison in their fangs. A single slash or cut from the animal will prove to be instantly fatal. Thorne’s partner is dead and at this rate the rest of the cast will follow their fate. Can he possibly get to the boat with the others before it’s too late?

The film offers the heroes one ray of hope which is that shrews can’t swim. If the heroes get back to the boat then they will be safe. The tough part is getting there since these animals are so fast and if you make contact with them at any point then you will be doomed. It adds a nice level of danger without making the situation impossible for the heroes. You can also think about how you would have handled it. The final plan is pretty inventive. I would have been a little hesitant because I can picture them nipping at your heels but it was better than just trying to run and gun it through the forest. Everyone always seems to trip over themselves in such a scenario.

The cast can be a bit on the week side though. There are quite a few people at the hut but most of them don’t get much of a role. You’ve got the scientist who is really into his work and barely has any time to really talk to anyone else. He barely gets any scenes but at least the guy is dedicated. Even up to the end he is writing down symptoms. You’ve got Mario who seems like a nice enough guy and at least he didn’t fall for the mindgames. That being said, he still didn’t contribute much. Ann’s father is a pretty big character and he seems reasonable if you ignore the fact that his experiments are part of what got us into this mess at the start. Refusing to leave also puts everyone in harm’s way. Rook was a fun character although he just doesn’t get to appear a whole lot. You definitely feel bad for him since his death was the most tragic. If only he had stayed on the boat.

The real big characters here are the main 3. Jerry is the drunk rival who wants to be with Ann but gets dumped early on. You can’t blame Ann int he slightest since apparently Jerry tried to ditch her for the monsters at one point. We actually see him do this a lot later on as well. The guy is actively one of the main antagonists in the film and doesn’t seem to care that their lives are already in danger. He’s super petty throughout and there’s definitely no reason to like this guy. This whiny kind of character makes for a decent villain I suppose. I would have liked to have seen some characters try a little harder to stop him from locking Thorne out though.

Ann is a decent heroine. She does move on to Thorne rather quickly though so as expected the romance in this film is pretty weak. It all moves at typical Hollywood speed which is just a little faster than how you would picture an actual situation taking place. She could be a little too scared throughout the movie as well. So I definitely wouldn’t say that Ann was a bad character in the slightest but she doesn’t particularly standout either. As for Thorne, he’s a good main character. He stands up for himself against the others and is always pretty prepared. He doesn’t panic a whole lot and quickly assumes the leadership role. He wisely doesn’t give Jerry a gun again until the very end. Honestly at that point I probably still wouldn’t have given it to him because Jerry blew too many chances.

The movie’s very short so you’ll definitely be feeling how quick the pacing is. It works well since no part of the film really drags on. It’s really a classic thriller type of template. The shrews themselves make for a solid threat. They’ve got a nice design and those teeth are definitely real sharp. You do not want to mess with these guys in the slightest. Unfortunately as mentioned in the intro they do tend to go for the animals a bit which does hurt. The horse dies and even when the heroes start to destroy the Shrews that takes some points away because they look like nice enough animals. Ultimately a film about evil animals is pretty much always doomed because it’s just hard to end the threat without ending a few of the animals. The film is about as fun as your average creature feature film but this ultimately holds it to a lower score.

Overall, The Killer Shrews is a fun enough film. It follows all of the usual story beats and executes them well enough where you’re on board the whole time. I was kept entertained as the film went on. The writing was solid so the interactions never got boring either. I like the fact that the Shrews are said to not be able to swim early on in the film because it very quickly gives you a tangible goal for how this is all going to play out. The heroes have a goal and they just have to aim for it. This way the movie never feels aimless as every scene is getting you closer to the next part of the goal. If you really like creature feature films then you should check this one out.