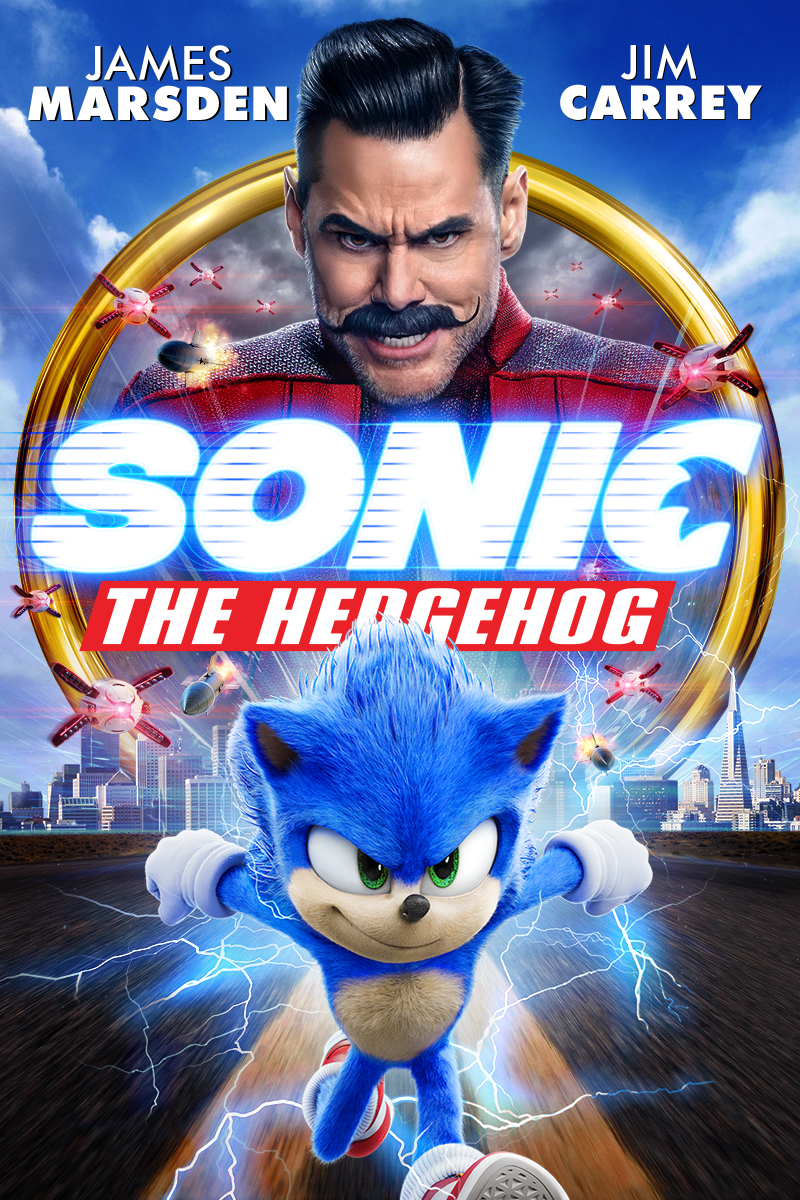 It’s time to finally take a look at the legendary Sonic movie that came out recently. Sonic has always been the greatest video game series of all time as soon as Sonic Adventure first came out. Once Sonic Adventure 2 Battle arrived the series cemented itself as a legend. Despite that we hadn’t gotten a big budget film like this one. Well, that’s finally all changed. It’s definitely a pretty fun film and a good way to get Sonic out into the mainstream. To an extent he’s already there as you often see kids playing the mobile games so it makes sense to launch a movie now since they’ll all check it out. If not for Covid this very well could have cracked 700K and I know the sequel will do incredibly well.

The movie starts off with a quick action sequence as Sonic is evacuated off the planet by a wise bird. Sonic barely escapes the Echidnas but his Mom figure is unable to make it through with him. Sonic’s last words of advice were to make sure that nobody saw him and to always teleport to a new planet if something happened. His rings allow him to go anywhere he is thinking about. Sonic makes a good life for himself on Earth but he is still pretty lonely. One day he gets a little too fired up and launches an EMP that takes out a quarter of the country. Dr Robotnik is called in to find Sonic and this guy has never failed a mission.

Meanwhile the human main character of this movie is Tom. He has always been a pretty great police chief in Green Hills but he wants something a little more exciting. Now that he has been approved for a position in San Francisco he is ecstatic but that’s when Sonic shows up. Tom helps him out but he is now labeled as a terrorist. Tom’s too deep in to back off now so he will have to help Sonic find his rings in San Francisco so he can escape to another plane. Will he be able to do this or will Robotnik get to Sonic first? It’s definitely not going to be an easy journey.

This is a comedy adventure movie so it’s a blend of both but the first genre is likely the most important. Sonic’s always been able to achieve a good blend, just look at Sonic Boom which to date is probably Sonic’s most impressive show. They’ve all historically been solid though and as expected Sonic works in this medium as well. The gags involving Sonic running around and playing by himself against himself are really solid. I like all of the speed effects and the humans are good too. Rachel is Maddie’s sister and works well as the character who is always trying to escalate things. She panics a whole lot and really doesn’t like Tom. She’s absolutely as exaggerated as you can get but it works well.

Most of the characters here are extremely quirky and they make for a memorable cast. Eggman’s right hand man was a lot more fun than I expected him to be. Part of why he succeeds is because he takes everything in stride. While some characters would be puzzled the whole time or panicking this guy never does. He just follows Robotnik’s lead and does whatever he can. Robotnik can be a bit extra at times for sure, but he’s a fun character. A lot of the best moments with him are his banter with Tom. Ultimately I imagine it will become more of an exchange with Sonic but for now this works. Tom really gave it to him with those punches. I also liked Robotnik’s montage while testing out Sonic’s quill for power. We even got a quick dinosaur thhere.

As the main human, Tom gets a lot of screen time so you’re definitely hoping that he’ll be good. Fortunately he works out quite well. The film is going for that buddycop feel and he gets a lot of fun dialogue with Sonic. He can also fight surprisingly well as seen in the bar. His wife Maddie is also pretty good. I’ll give her props for not panicking the whole time the way a lot of characters do when they see an alien. Maddie is just ready for the experience and doesn’t really let it get to her. There are a few more characters but the final important one is Sonic. His character has been through quite a lot like with the design issues. Ultimately this design is way better than the first one they were going for. It’s definitely not quite up to the real Sonic design from the games but as this is definitely aiming to be a much younger version of Sonic than what we are used to, it works out pretty well. I can’t quite imagine Sonic acting quite the same way if he looked more like his adult self.

It’s a lot of fun seeing Sonic use his speed to save the day. We also got some Quicksilver type scenes of him messing with the room. Sonic’s very entertaining and I’d say that the film did him justice. As you can see, the cast here was solid and the writing was also pretty good. Most of the jokes land and the film is just a lot of fun to watch. The pacing is quick and you’ll never be bored here. The effects are also solid for the action scenes we do get. There aren’t a whole lot of them, but they work quite well. The best one is naturally the high speed chase with Robotnik at the end of the film.

While the film has a lot of things going for it, there are a few elements that do keep this to being a very good film rather than hitting the elite level. First off, the power levels are pretty bad. This is almost inevitable for a speedster based film but it’s especially noticeable here. Are we to believe that Sonic can be hit with a tranq dart, an explosion after he gets the button off, or that he can’t outrun Robotnik’s robot at the end of the film? None of these scenes make sense in the same context as the bar scene existing or the missiles on the roof. Both of those scenes show Sonic as being so crazy fast that time is basically stopped and there is absolutely no way anyone can catch him. Even if Eggman has one quill and part of the power his robot simply wouldn’t be that fast. I think the film saw the Quicksilver scene and wanted to do their own version as well but little did they know that scenes like that always bring up a ton of plot holes.

My other issue is that Sonic was a little too weak here. He is shown to physically have the strength of a toddler. He lands a lot of direct punches on people in the bar brawl and they do no damage. That doesn’t really make sense to me. With speed comes power. The Flash shows this often since building up momentum and throwing a punch always does more damage than a normal one. It’s the same concept so super speed automatically gives you super strength but a lot of films don’t really think about this. These two aspects of the film aren’t huge in the sense that they’ll cripple the score or anything like that. They’re just very noticeable and I think the movie could have done better here.

The soundtrack here is also pretty good. There are a lot of solid danger themes here and they flow well with the action scenes. One thing I was shocked about though was seeing the Final Fantasy VII theme in the film. Seriously, watch the scene where Sonic and Tim are in the car trying to fend off the various robots Robotnik keeps sending out. It’s a sped up version of the main battle theme. I have to see if someone made a comparison video on Youtube yet because that was really cool. It’s a battle theme that has withstood the test of time so naturally hearing it in a theatrical film like this is definitely worth it.

Overall, Sonic The Hedgehog is a very fun film. It sets up some good plot elements for the future as well. Make sure you stick around after the credits for a quick stinger. I’m hoping it doesn’t take too long until the sequel comes out because I’m ready for more Sonic hype. There are quite a lot of ways the sequel can go. Personally I’m expecting a return trip to Sonic’s home world but I’m also game for Metal Sonic showing up or Shadow The Hedgehog. We need to get close to the events of Adventure 2 Battle, that will be great. If you haven’t seen this film yet then you definitely need to check it out. It’s really just a lot of fun and has a high amount of replay value.