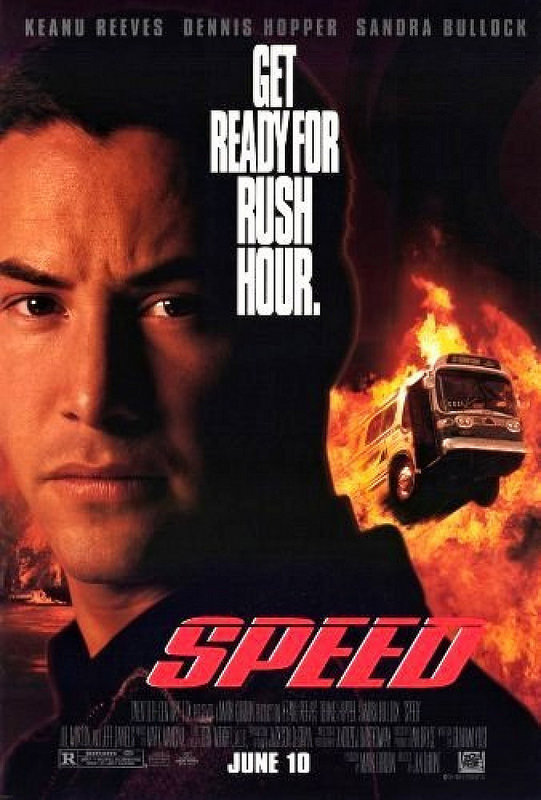 It’s time for a classic thriller film. With a title like Speed, you’re definitely expecting a lot of action and intensity throughout and the film delivers. While there may be a moment or two that will stretch your disbelief, the film did a good job of covering its tracks for the most part. One thing that these films typically have a problem with is making the villain too powerful. He is somehow everywhere, has plans for everything, and ends up performing feats that make you question the logic. That’s not an issue here as Howard’s (The main villain) twist covers all of the bases.

Jack is one of the best swat officers in the business. He likes to go on gut instincts and always makes the villains pay for their criminal deeds. It’s just another day at the office when he stops a crazed bomber from destroying an elevator full of people. Unfortunately, the criminal has been nursing a grudge about this and shows up one day to even the score. He has planted a bomb on a bus so if it ever dips below 60 (I believe it was 60) mils an hour, it’ll blow up. If someone tries to leave the bus, it’ll blow up. If anyone other than Jack tries to get onto the bus, it’ll blow up. Etc etc. Howard seems to be able to see into the bus at all times so the heroes have to be careful. The fuel won’t last forever so Jack is going to have to rely on his instincts one more time.

Howard definitely has a lot of tricks up his sleeve. He has planted cameras in multiple areas and can tap into the police communicators. This all makes sense given what we know later on. He’s definitely psychotic and the film never tries to make him sympathetic. (That’s good since I wouldn’t have bought into that) He does a pretty good job although the heroes should have been able to defeat him a little sooner. There are two main points where he should have been taken down. One was immediately after the elevator incident as Jack could have shot him. The other was when he first implemented his plan. A security officer walked over and instead of calling for backup, he proceeded to get one shotted. It wasn’t his best moment. So, Howard’s plan was definitely risky throughout and I’m also wondering how he got out of his bomb suit in time. He definitely did raise the body count by the end of the film though so he did some damage before going down for the count.

I was a little surprised that a certain death towards the middle/end of the film wasn’t played up more. It was essentially skimmed over, but given the circumstances, I suppose they didn’t have much time to dwell on it. Jack’s a solid main character as you’d expect. He’s really good at his job and while he’s seen as a hot shot, he does take the time to think things through. He’s just a very reasonable character and it’s good to see the main lead have as much confidence as he does. Annie made for a good main heroine. She always had the witty comebacks at the ready and wasn’t intimidated by all of the chaos around her. She also did a good job of getting away from the troublemakers on the bus very early on. Those guys certainly didn’t help matters at all with all of their bickering. One lady was particularly bad as she just cracked and decided to ignore the obvious bomb as she tried to escape. The cops were almost as bad there though as they were trying to help her. Not a good move.

As always, I do have to say that the romance in the film was a little rushed and cliche though. Jack and Annie quickly bond because of this emotional experience. Annie even points out that romances this sudden and nonsensical rarely last which will probably be the case. Even ICarly had an episode about this where the main lead’s life was saved by the guy so she mistakenly thought that she liked him for a little while. You always have to be careful not to mix up feelings of gratitude with love. It’s not like it took much time out of the film though since it was only a quick moment at the end, but Hollywood has to squeeze in its romance somewhere.

I did mention that I had to stretch my disbelief a little before. I’m referring to one scene in particular as a large part of the road is gone so Jack decides that they have to drive over it. He figures that if they drive fast enough, the momentum will allow them to make it. This definitely should have not worked in the slightest. The gap was way too big and the camera angles had to quickly switch all over the place to make it seem even slightly realistic. So, that part was a little iffy, but the rest of it was all on point. The cops all picking obvious hiding points may have been a little sketchy, but I don’t blame them for not noticing the hole under the trash because that was pretty clever. They should have had the tracker on from the start…but that’s how it goers I suppose.

The soundtrack was pretty solid. The themes definitely worked really well for the film and kept up the energetic atmosphere. The writing was reasonably good. The edited version cut out most of the iffyness. It’s nothing to write home about, but at least the characters weren’t constantly running around swearing. While they were annoying, the people on the bus were also pretty realistic because I can picture everyone being super petty like them even in such a dangerous situation. It’s just how people are on a bus…even the guy with a gun. Shooting the driver was pretty iffy though and I felt bad for the guy, he didn’t ask for this! It’s also not every day that you get a bus thriller instead of the usual car one. I like car chases as much as the next guy, but adding a bus certainly changes the dynamic quite a bit.

Overall, Speed is a pretty good film. Jack was a good lead and the film played out like a fun action blockbuster. It may not be something that you’ll remember as an all time great but it didn’t really have any big negatives. The villain was tough and it made for some good mind battles between the two, but the film never went out of its way to make him extremely psychotic or intimidating with super violent scenes. The film was actually fairly tame in that regard and it’s been a while since we had a villain who was just in it for the money. It’s probably still the most iconic goal for an antagonist. I recommend checking this out if you like a fast paced action and the film is pretty long so a lot happens along the way.