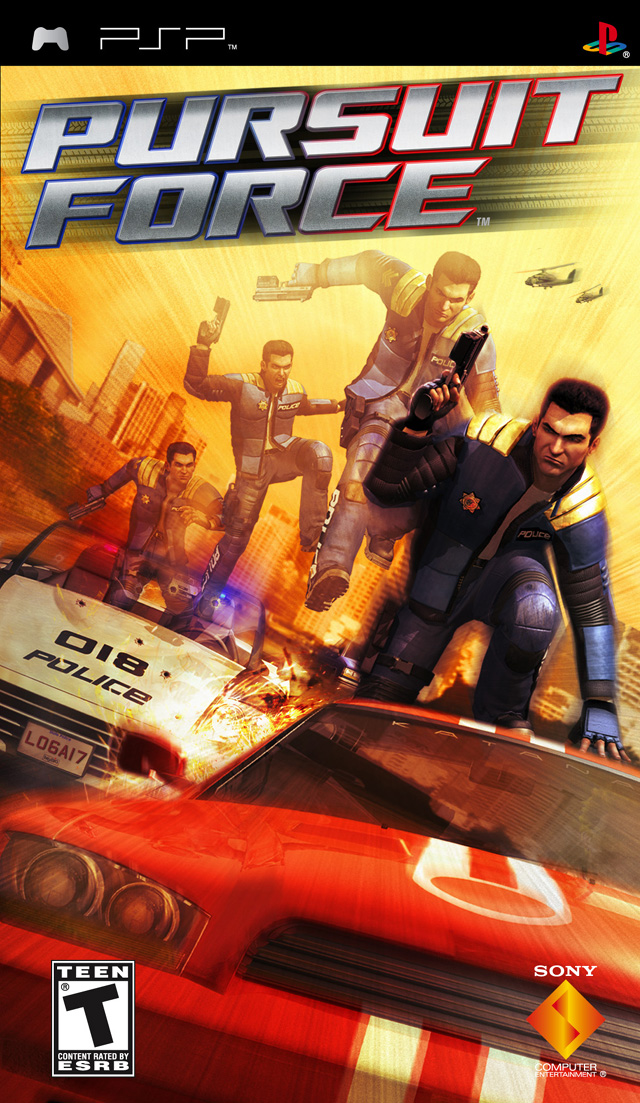 It’s time to look at a pretty exciting PSP game. This is definitely not a title that I had known about until I received the second game as a gift. Naturally this meant I needed to hunt down the first title. It’s sort of like Need For Speed only this time you’re actually on the side of the law. We also have quite a few different gameplay styles which is interesting. It’s a fun game, but one that is relentlessly difficult. Completing the final levels will likely prove to be some of the toughest racing you’ll have to do and should give you F-Zero GX flashbacks. It’s definitely a game I’d recommend checking out.

There isn’t much of a story here. There are 5 different chapters with each chapter having 6 levels. Completing them all lets you see a quick cutscene as you put the boss away. The main character never talks or anything so you have to sort of think about what the guy’s character is really like. His boss does all of the talking as he takes constant shots at you and always threatens to fire you when you lose. The gangs range from the Mafia to Ninjas, to Jewel Thieves so there is a good amount of variety here. With 30 levels there’s a decent amount of content to get around here but the game shouldn’t take you a super long time. You’ll have it done in under 10 hours for sure and then I suppose you can work on getting higher scores. Unfortunately there isn’t really anything in the way of replay value so the main campaign needs to be what hooks you.

Let’s take a look at the gameplay. The main style is the car sections of course which makes sense. Usually these missions are about blowing up all of the enemy cars or recovering an artifact. The idea is you drive after the cars and start blasting at them with your gun. There is a strategy aspect to this as well though. You can choose to finish them off from your car or jump over and take control of it by taking out the drivers. Usually it’s better to take over the cars but near the end of the game you have to be careful about it. You have two different health bars, one for the car and one for the pilot. If you just finished blasting the enemy car to near death and then jump over, you’re about to take over a car that is severely weakened. Additionally, their guns pack a punch and when you leave your car you are pretty defenseless.

Sometimes it’s better to avoid a confrontation a bit so you can get some health back since it regenerates over time. You also want to build up justice meter as fast as possible since it recovers all of your health and is really good to have when you’re in a jam. Trust me, this will help you out of a whole lot of sticky situations. The time limit will be your biggest enemy in the boss fights though. In those levels you have to beat the boss before he/she escapes so you’ll have to adopt more of a risky style here. I haven’t played combat racing games quite like this one so it was a lot of fun. I could see Need For Speed borrowing some ideas from this someday.

Then you have the first person shooter levels where you are riding in a helicopter and have to blast away at the boats and cars that the villains are using. These levels don’t show up often so they were a fun change of pace. I would say that the car levels were still better of course, but I’ll give the game some props for deciding to switch it up like this. Finally you also have the levels on the ground where you have to strike your enemies down. These are pretty fun even if it feels like not a lot of time went into them. The controls are not quite as smooth as in the other two areas but it does give this more of an arcade kind of feel. You basically run around blasting everyone. If you get close to someone you can also activate a quick cutscene where you knock them out and put on the handcuffs. That’s always pretty satisfying and I actually had the most fun in this mode. I just love a good third person shooter gameplay and you just don’t see a whole lot of those anymore.

As for the graphics, those are pretty good. The PSP always was pretty ahead of its time in terms of the graphics it had. I’d make the case it can hold its own with the 3DS despite that console being a lot newer. As a result you definitely won’t be disappointed at the visuals here. They’re all on point for sure. The soundtrack is a bit more limited since each world seems to only have one main theme but they’re still solid. My favorite theme is probably the one that plays all throughout the Vixens chapter. It’s very fast paced and really gets you ready for the high speed race that’s about to start. For any game it’s important to have a good soundtrack, but especially for a racing/battle title because you need quick tunes to stay in rhythm.

Overall, Pursuit Force is a pretty solid action game. It’s a little on the short side but the difficulty level helps to ensure you won’t beat it so easily. You really have to master each level so some may take you quite a few tries. No worries though, you’ll get the hang of it the more you play. The gameplay is pretty tight and the music themes are also good. There’s not a whole lot more to ask for here. I’m looking forward to playing the sequel shortly and we’ll see if it’s able to match up to the first. I like to think that a sequel should always be better than the original so I’m expecting some big things here.