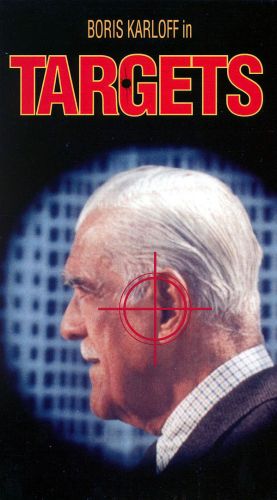 It’s time to take a look at a pretty old horror/thriller film. It’s got two main plots that have a big contrast both in tone and quality. The plot about the old movie star was actually pretty interesting and if the whole film had been about that then I think it would have been quite good. Unfortunately the other plot about the serial shooter ends up holding the movie back considerably though. Ultimately the film isn’t quite able to rise back up and make a comeback.

The first plot starts with Byron announcing a sudden retirement. This throws the studio into chaos since they were really counting on him for a few more horror pictures. He’s their main guy and without him these other movies are doomed. Sammy is particularly crushed since he had a movie all lined up. Byron is convinced to go through one last presentation though and heads off to a drive-in theater to do it. Unfortunately this is the same location that the wandering murderer Bobby is going to appear at. Bobby one day cracked and went off to buy some guns and shoot everyone down. He manages to get quite a lot of people down for the count before Byron is forced to step in. Can Byron take Bobby down or will the 40+ year age difference make him lose this fight?

As mentioned, the Byron plot is pretty solid. The story of an actor who has grown tired of the biz is a classic. We see him try to push everyone away but his secretary isn’t having any of that. She’s definitely a very loyal worker and always has his back. Byron’s a pretty charismatic lead as well and his scenes are pretty interesting. You do have to know when to call it a day and he was pretty old so it makes sense that he would want to retire and finally enjoy life a bit. I definitely don’t blame him for leaving. It was sudden but no more so than when a company tells you to skedaddle as well. It was nice that the film was actually using real films for Byron’s character though. I’ve seen quite a few Karloff films over the years and so the footage they showed of the two movies were for films that I had actually seen. I thought that was a real nice touch and helped to make the experience feel a bit more real. It adds some realism to the context of Byron getting ready to retire.

The Bobby plot though is going for more edge. He murders his family and then heads to a highway where he murders a bunch of other people. It takes forever for someone to take him down and his scenes are the equivalent of a guy just shooting at people who can’t fight back in the slightest. There’s nothing particularly entertaining about his plot and it just makes the film drag on. The tone and pacing of the Byron plot was excellent while this one is a perfect contrast in that sense. Bobby also can’t hold his own plot because he has no real charisma. The guy is meant to be very plain and in that sense the film succeeds. There’s nothing interesting about the guy and so a whole plot about him was destined to fail. This plot is definitely also a little more violent than the Byron one. You do actually see everyone getting shot whether it be from a zoomed out distance or up close.

The final confrontation of the film also can’t end up being too exciting because Byron is super old. There’s not really anything he can even try to do against Bobby realistically. The film’s trying to go for some deep messages in the end or to show that Bobby is super insane, but realistically he would have won that battle. His sudden breakdown there seemed awful convenient for everyone. The slow reaction of the staff was pretty realistic though as they initially figured the sounds were from the movie or something and didn’t get with the program for quite a while.

Overall, Targets is not a film that’s aged particularly well. It tried to ambitiously have two plots where the characters ultimately have to meet up in the end but it just didn’t work out. You can definitely have two plots meet up at the end for nice results but it’s very difficult in a single movie. If you do it, you also have to ensure that both plots are pretty interesting or it’s just not going to work. Off the top of my head I can’t even think of any big films I’ve seen recently with two plots like that. I think the closest would be Infinity War but that was a sequel so it’s a lot easier for a bunch of plots to converge like that. I’ll try to think of more films where that actually happened, but needless to say this will not be one of them.