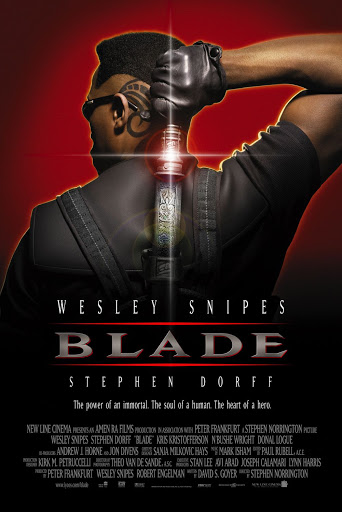 It’s time to look at one of the original comic book films from back in the day. Blade is largely forgotten nowadays although it seems to have had a bit of a resurgence in recent years. It’s a vampire film which naturally does limit how good it can be to a large extent. Unfortunately the comic book aspect of the movie was unable to do enough to take it back to the next level. It makes all the usual mistakes of a vampire film and ends up being rather similar to Resident Evil. Resident Evil would ultimately have the edge though with its top tier soundtrack and a more interesting plot. Come to think of it, zombies may also beat vampires for me although it’s close since both don’t make for particularly good movies.

The movie starts off with one human being lured away to a vampire party. They are about to finish him off when Blade appears and destroys the lot of them. Unfortunately he decides to toy around with one of them a little too much so he manages to get to a hospital and murder a bunch of people as well bite Karen. Blade takes Karen over to his base where the Whistler tells Karen that it’s all over. She’s already dead and they’re not going to help her. Karen’s not thrilled about this so she decides to stick with the gang. At the very least she should be safer with the pros right? Blade doesn’t have much time to guard anyone though because he’s on a quest to avenge his mother and himself by murdering Frost. Frost is the one who turned Blade into a vampire after all and this is the closest that the hunter has gotten to being on his trail.

Right from the start Blade introduces itself as a film that is going to go all in with the violence and vampire action. The first scene probably has more blood almost all of the other comic book films. The violence never lets up either as we see people eaten and blown up. The TV edit does cut away from a lot of the direct moments which is quite telling considering how violent the film still was. Automatically there’s no way the film was going to get a very high score because of how excessive it all is. Definitely be sure you’re cool with the violence if you plan on checking this one out.

I’ve also never been a fan of the drinking blood angle which is pretty hard to avoid in a vampire film. It’s part of why those films are always destined to lose if you ask me. While it can be possible to do a good vampire story (Records of a Fallen Vampire) it is very difficult and not particularly likely. The villains aren’t particularly fun either. You’ve got Quinn who is the main comic relief of the villain group. He is always in a party mood and doesn’t take things too seriously. This never bodes well for him in a fight and you know from the start that he has absolutely no chance against Blade. He’s just completely out of his league.

Then you have Frost who can be a decent main villain in some Blade stories but he doesn’t work here. They really play up the fact that he’s a much younger vampire than the others so he’s always fooling around. The guy is pretty smart and does take the vampires to new heights that the old ones wouldn’t have reached. He definitely gets some points there and is a reasonably strong villain. Ultimately he’s not nearly as charismatic as he thinks he is. The rest of the villains don’t really get much of a role. For the most part they’re just here to get blown up.

For the heroes we’ve really got 3. First is Whistler who is the mentor figure of the movie. You can probably tell how his story will end up the instant he is introduced. He’s human so there’s not a whole lot that he can do against vampires with their special abilities. Still, he doesn’t back down from a fight which is really important in this kind of thing. He’s a bit of a downer though as he doesn’t even try to give Karen any hope. Karen is a solid heroine though. She does actually get involved in some of the fights and adapts pretty quickly to using a gun and other such tactics. I was glad that she spent more time being pro active as opposed to running or something like that. She was even able to work on a cure right away. Karen contributes quite a lot to the cause and that’s why she’s a pretty solid character. I’d be up for seeing her in sequels someday.

Then we have the main character Blade. He feels sort of like a more brutal Batman at times with how he will suddenly appear and start taking out the enemies. The main difference of course is that Blade murders his opponents. At first he tends to spare the humans although in some fight scenes it’s really hard to tell if he spares anyone. By the end though he is all out of mercy and just takes everyone out. He’s a pretty great lead. Blade’s serious and down to business throughout the movie. The film did a really good job with this portrayal and I’d say that Blade is pretty much perfect. I also like all of his tools and weapons. It makes for a pretty good arsenal in these battles.

The fight scenes are pretty good in the movie as well. When it’s not going out of its way to be particularly gritty we have some solid hand to hand action and swordplay. The scene of Blade arriving in the climax was handled particularly well as he got down to business. His opening fight against the vampire army was also solid. The movie helps to enhance these scenes with a solid soundtrack as well. We get some pretty fun rock themes for the battles. They have a nice retro feel that you don’t really see quite as much anymore in the modern films. For some reason rock music doesn’t seem to be as popular for the average fight scene which I don’t understand because the fast tempo should always be in season.

Overall, Blade is definitely what you would expect from a vampire action film. The action can be good but ultimately the film is held wayyyyy back by the vampire angle. It goes way too far in being overly dark and gritty. I can’t recall the last film I saw which was quite this violent. The body count is pretty high and you usually won’t be able to go more than a few minutes without something super violent happening. The film can be having a fun little scene and then you’re thrown into the next villain scene or something crazy happening. Pretty much any villain scene will end with something violent happening. These instances certainly add up so I wouldn’t recommend this film. It’s all just too excessive. If you want to watch a good supernatural action film then it’s time to watch the Avengers 2012 instead. It delivers on all of that without going overboard. We’ll see if the next Blade films are able to improve from this one or if they will ultimately make the same mistakes.