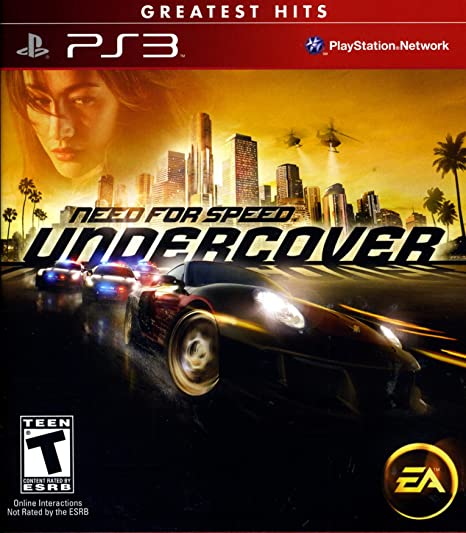 Looks like the Need for Speed marathon is finally at an end. I’ll play through the next one at some point but at least for right now this will be it. Undercover is definitely a very solid installment in the series though. Not only does it have a lot of content to go through but it also takes us back to the more plot driven direction of the earlier games. It could stand to have more of a focused story but even just having boss battles is a big improvement over the last few. It’s just hard to top that and I wonder what they’ll do for an encore.

The game starts with the main character being tasked with the assignment of going undercover in order to take down a bunch of renegade racers. Gangs are popping up everywhere and you have to stay undercover until you find the big boss. The tricky thing is that you start to sympathize with some of these racers who are just trying their best to live and survive in what is considered a pretty frightening world. Is there any way that the hero can let them off easy? He’ll have to also avoid attracting too much attention since some characters already think that he’s probably compromised. It sure is difficult to keep getting these guys arrested while the lead is somehow safe.

I feel like the villains should have known something was up the instant we busted an entire gang, leaving the main character as the only guy left. At this point we joined another gang and did the same thing but really? That’s super suspicious. The main character doesn’t get to appear all that much and even gets censored during the quick cutscenes with the cops so we don’t see him all that clearly. I suppose he seems like a nice enough guy but also a very gullible one who is easy to manipulate. His driving skills are second to none though and the villains learn that the hard way. The ending has a lot of things happening so you’ll need to pay attention to that.

Unfortunately the sound mixing wasn’t very good. The gameplay and music while in the race are much louder than the actual cutscenes. What this means is that you’ll be playing normally when suddenly a cutscene occurs and you need to raise the volume. If you don’t then what ends up happening is you won’t be able to hear what’s going on quite as well. I don’t really get how something like this would make it past the play testing since it seems like a quick fix. Beyond that, it has the usual EA soundtrack. There are a lot of songs here and they’re all pretty fast paced so I’d say that you’re bound to find at least a few that you’ll like. I’d be surprised if you didn’t. The ending song is definitely a pretty intense one and ends as if this was a theatrical movie. Pretty epic if you ask me.

Then you’ve got the graphics which are solid as always. EA has never disappointed in this area and I wouldn’t expect them to start now. The cars look excellent and so driving through the city is a lot of fun. It’s all or mostly all in the daytime though so surprisingly we’re still not getting a lot of night levels. I know those can be risky since it can be hard to get the night look while not getting too dark but I think they can pull it off. Regardless, the hub world is quite huge and the fact that you can drive around the whole thing and pick up missions is a blast if you ask me. The cutscenes also look really good like the big boss battle at the end where the car jumps off the road. It helps really get you into the swing of things.

The gameplay is easy enough to describe. It’s the same 3D racing that you’re used to and is as fun as always. Using your nitro to get away is nice or quickly spinning a 180 and zooming away as the other racers get confused is just as satisfying. You really can’t go wrong with the gameplay here. There are no bonus competitions like drifting or any of that this time. It’s all about racing and I wouldn’t have it any other way. This makes the most sense in context after all. You will get new cars as you go through the game and can upgrade them but the process has been very simplified compared to how it was in other titles. I think this game has pretty much nailed down the formula so they should really stick to this going forward. You still need to take a look at your car every now and again but not constantly. Aside from free roam you can also use the GPS to jump straight into a race. You can tell which events are story ones because the icon will be wrapped in a circle which looks very fancy.

If you complete a level very quickly you will have “dominated” it which allows you to permanently increase a stat. You don’t get to choose which one but they certainly add up. I recommend going for the dominate as much as possible because the stats and discounts add up very quickly. Without them I imagine that this would be considerably more difficult. The main game’s campaign took me a little over 10 hours so when you add up all the extra events that should probably take you to around 14-15 hours. Pretty good deal for the game if you ask me. You certainly won’t be wanting for content by the time you’re done with all of this. Undercover is really the complete package for a Need for Speed title.

Overall, I’ll definitely miss Undercover. It’s definitely the most complete game in the series I’ve played since Underground. If you like racing around the city and enjoy Free Roam then this is definitely the game for you. It’ll remind you of Driver with the added danger of having to run from the cops. The cop chases here can definitely be very intense. There’s not a whole lot you can do about the hellicopters and their vans really smash your car out of the way. The game runs well and the graphics are sharp. I only encountered one glitch where I seemingly won a level too quickly which was odd so it didn’t count. It seems like that’s not something you would typically need to worry about though so I wouldn’t sweat it. Could be a while, but we’ll see where the series goes from here.