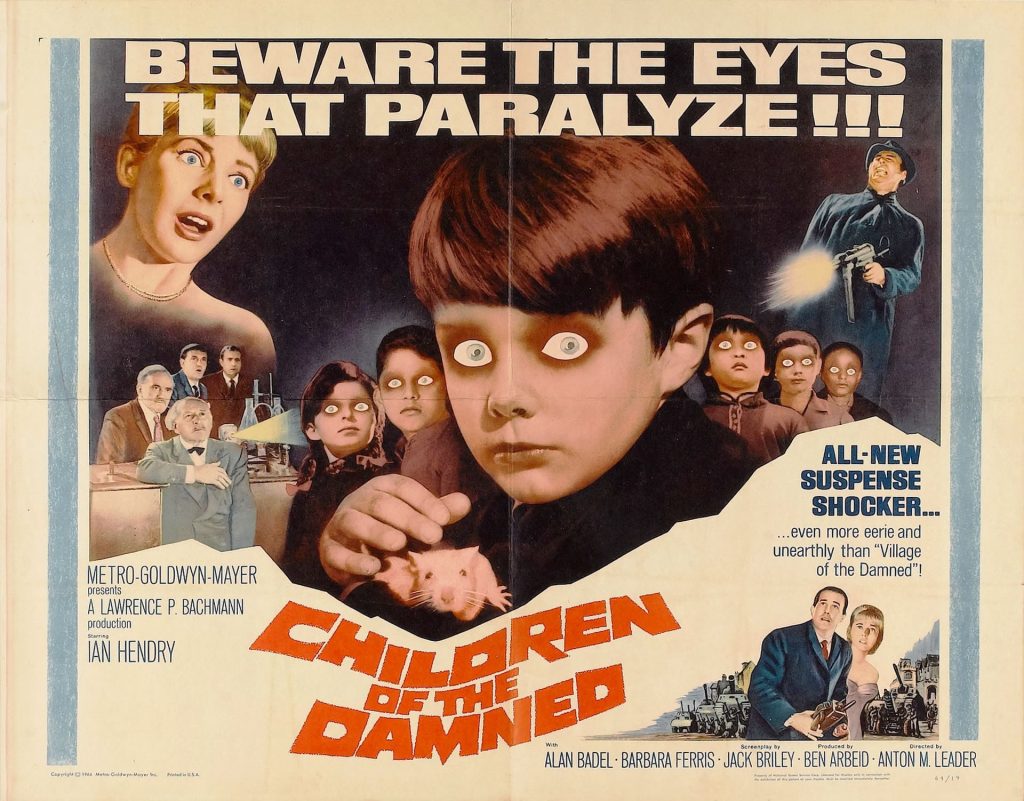 It’s time to look at a sequel to a film that you would have thought would just end. I suppose there’s always room for a sequel though and I’ll never fault the idea of it, but this movie clearly didn’t have much of a plan. The villains themselves don’t have much of a plan and since the alien angle has been removed the movie is lacking that big punch that it could have had. Throw in some animal violence and I’m afraid that you’re in for a bit of a bumpy ride.

The film starts by reintroducing us to the 6 miracle children. As in the last film they all share a brain and so they all know what each others learns. Then you’ve got the fact that they have advanced hypnosis where they can control a person to do whatever they want with ease. These abilities make them hard to control or defeat. Tom and David are two people who are interested in these children but the situation quickly goes above their paygrade. Members of each embassy have decided that the children are too dangerous and are led by a man named Colin in destroying them. Can Tom and David stop them or will they ultimately decide that perhaps Colin is right and these children are too dangerous to live?

Naturally this film confronts you with the question of if it’s right to destroy these kids. Whether they’re aliens or not, the kids still appear to be children so right off the bat destroying them does not seem to be just. It’s also true that they tend to not strike unless someone attacks first but due to the nature of their powers you can never know if that is correct. When you are mind controlled you have no memory of this happening and so they could have already been manipulating people. Their abilities are effectively impossible to stop so your only bet is to take them down from afar.

I don’t think we needed to be reintroduced to the gang though. Having Tom and David know about the kids beforehand would have been pretty good I’d say. They make for solid main characters though. At first they’re just interested in what’s going on. They have some fun debates with Colin, a man the government has sent to put a stop to this. There is a lot of theorizing going on until eventually everyone is forced to choose a side which even leads to some in-fighting. At the end of the day they don’t handle the situations very well though. From Colin’s side, since he wants to destroy the kids that should be very easy. If you blow up the buildings or snipe from afar then there’s nothing their mental abilities can do. Instead a lot of the time you see them send in guards at close range who are promptly defeated. The worst attempt was likely when they had 3 guys walk up to the main kid and try to attack him. As if that stood a chance of succeeding.

The film could have gone a long way if it actually made the kids likable. Then you’d be able to sympathize with them or something. The problem is that they act like emotionless robots. Additionally they all seem to be evil from the jump, forcing their parents to crash into cars and messing with the dog. Yes, the film had to force in a dog death which did not do it any favors. I don’t see what the point of having the dog in the film was either. It’s not like it changes anything so in the end all it does is give the film another chance to fail. Why were the kids acting like this anyway? I suppose it’s the ole power corrupts case where growing up with invincible telepathy made them turn to the dark side. I could see it I suppose but from the first film the kids seemed evil from the start as if they were being controlled.

It’s why the film should not have gone away from the alien angle. These kids just being ahead of their time makes a whole lot less sense. I suppose aliens could be trolling by evolving people at random but the idea that aliens sent in advance scouts makes a lot more sense. Of course that could still be the case since the humans are just guessing but usually when the guess is presented like this is means that we’re supposed to take it as correct. Too bad, the film could have had a lot more mileage out of the alien idea. Towards the end the characters even ask the kids if they have any kind of plan and they basically shrug and say no. So much for the villains being interesting.

All I can say for the film is that it had some decent characters at least. I enjoyed the banter with the main 3 guys as well as Paul’s guardian who did her best for most of the film. She was effectively held as a hostage for the second half of it though so there wasn’t a whole lot she can do. The scenes of the kids just staring into the screen can get old pretty quickly though. It’s just hard to make a kid look scary at that age so you’re more likely to chuckle than grimace.

Overall, This is definitely not a film that I would recommend. It feels rather aimless for most of its run to the point where you question why the film has come out. What is the message that the film is going for? I suspect you will still be puzzling through that notion at the film concludes. The ending is pretty bad even if it was all part of the kids’ plans. It still makes the characters not look so good and you feel like things never had to escalate to this point. Surely characters with genius level intellect could think of another path or something right? Almost any other plan would have been more effective.