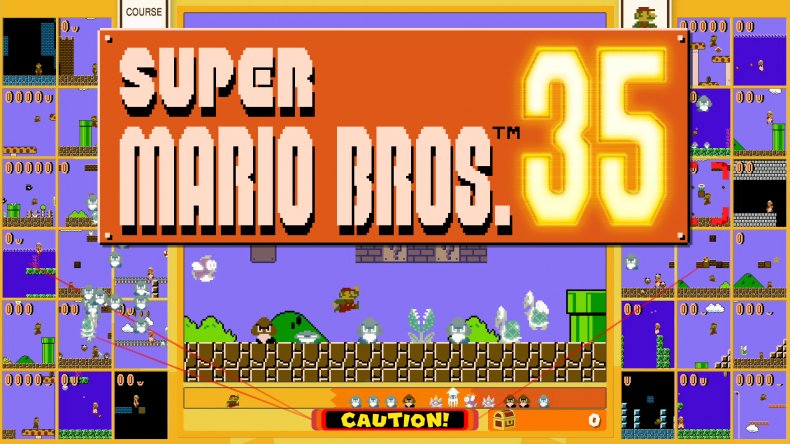 It’s time to take a look at Nintendo’s latest Mario adventure. This one is sadly not going to be around for very long though. I still don’t understand why you need to make it so limited but I guess Nintendo loves making people feel the fear with these things. Now you got to play the game right away or it’ll be gone once March hits. It’s a pretty fun take on the whole battle royale thing. I’d say it’s a bit more limited than titles like Tetris 99 but maybe that’s just the way the gameplay seems. Technically there are more level variations than in Tetris so it may just one of those things that is not as it appears. I played it for about an hour though so had some good fun.

So the idea is that you’re playing through the classic Mario levels as usual only there is a timer now. If the timer runs out then that means you lose. In order to get more time you need to take down some enemies, complete the level, or grab an extra power up. Extra power ups get you 15 seconds so I highly recommend using them. Typically spending the 50 coins at the beginning to start with a fire flower pays off instantly so I highly recommend it. It takes a little time to get used to the old control set up with how the gravity acts differently so by using the fire flower you can bypass that to a large extent. Just spam your fireballs and you’ll be okay. It’s easy to string a lot of KOs together that way and it adds a whole lot of tinme.

You also level up as you play more and more games which is fun. You unlock more icons that way. It may not be a big deal but whenever you have unlockables I feel like it makes the game more fun. You feel like going for another round just go get the crispy items. I made it to around level 16-18 before stopping. I’m guessing the levels will slow down pretty soon but it’s definitely a nice little addition to have in the meantime. As for the levels I’m not sure exactly how they’re unlocked. For now I’ll assume it’s level based as well. I got up to 3-1 so far. Either way the levels seem to pop up randomly though so you never know which one will turn up next. It always keeps you guessing.

The highest placing I got was 3rd place. Usually once it’s down to the 3 people left it becomes an endurance match of who can keep going the longest without tripping. If you all have fire flowers then tripping is the most likely way that you would meet your demise. I don’t expect you would lose any other way at that point tbh, but sometimes even the easiest obstacle can appear to be tricky. For example, I’m still not super comfortable with the jumping mechanics so it’s always possible that I’ll just fall into a hole. I’m so used to the modern Mario games that it can be tricky to get into the more retro mindset here.

The graphics are basically grabbed directly from the original game so don’t expect any super bright colors or things like that. This is a very basic game at its core with the multiplayer part making it more competitive. I guess it would probably throw everyone off if the graphics suddenly turned modern and also the point of this is for the 35th anniversary so I imagine that may not have went over very well with a lot of the fans. As for replay value, you can definitely come back to play this game all the time to earn more levels ups. It’s the kind of game that has unlimited replay value for as long as the servers are up. There’ll always be something to do.

Overall, Super Mario Bros.35 will really test your platforming abilities. The enemies are something you really have to watch out for so you don’t die before your time. It’s always fun to jump in for another round though. The end game phase of the levels can take a little while to be sure, but the gameplay is fun so it’s not really a problem. I’d like to see the game expand to more levels and modes eventually but I suppose that probably wouldn’t happen for a bit or if it did then the game would need to extend its deadline from March most likely. I can’t see myself sticking with this one for very long at the moment but it’s definitely the kind of game you could just pick up and play here and there for good results. I hope Nintendo experiments with more games like this.