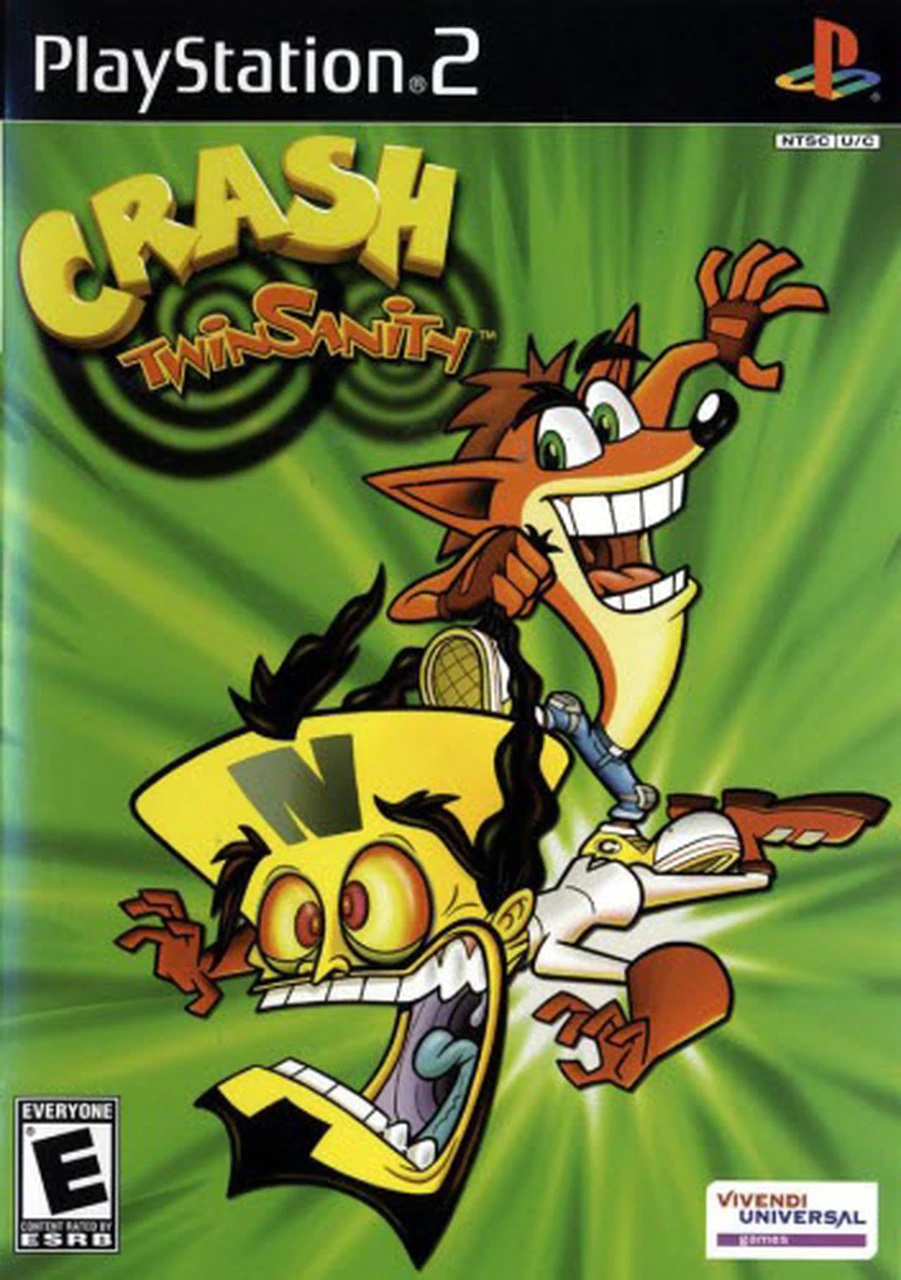 It’s time to look at one of the classic Crash games from the PS2 era. I knew right away that it was going to be time to give this a shot after going through the newer Crash game. It’s always fun to take a peak at the classic games and Twinsanity definitely has that charm. In some ways I would even say that the plot may beat the newer one. It definitely has a lot of fun embracing the crazyness of the series and a certain guest star’s cameo at the end of the game was brilliant. It’s not something that can be topped very easily.

So the game starts with Cortex hatching another plan of his. He dresses up as Coco and is able to even trick Crash with his disguise. It’s not Crash’s best moment but you could also make the case that it’s pretty much par for the course with this Bandicoot. Unfortunately for Cortex there are other players at work here. A pair of aliens have shown up and they want revenge on Cortex for something he did to them as a child. They certainly don’t tend to forgive and forget the way that other characters do. Cortex is basically forces to work with Crash as a result so that he doesn’t get destroyed. Along the way all of Crash’s other enemies pop up including the iconic Dark Crash. Will the heroes be able to win?

The plot is pretty bonkers but that’s part of why the game succeeds so well. Things just happen out of nowhere and the story goes crazy. Dark Crash literally jumps out of nowhere to chase Cortex and vanishes as soon as he shows up. It’s almost like how Shadow just suddenly showed up in Sonic Boom the game. Dark Crash has a pretty terrifying final scene though so he’s still someone you don’t want to mess with. Cortex certainly does look very good here so I can see why he was a fan favorite. We learn a bit about his backstory like in his school days and more of his motivations for dealing with Crash. The guy may not be a very serious Crash villain most of the time but he is still a genius so you really don’t want to be on his bad side. He can deal out quite a bit of pain when he really wants to. Even by the end of the game he still tries his usual tricks.

For a villain like Cortex you do gotta find the right blend of comedy and action for his character to work. Cortex is just skilled enough where you can picture him destroying Crash but a nice enough guy where they could team up on the regular. I’m always up for a team up so that part of the plot was definitely a blast. The ending also leaves a lot of potential for future games even if it’s unlikely. Perhaps the most emotional part of the game is that Crash clearly still wants to be friends with Cortex. he doesn’t let any of this get to him personally as seen by his attempt to be Cortex’s friend in the end. The betrayal hits really close to home as a result and you may even shed a tear.

As for the gameplay, this is your classic 3D Platformer. You jump across obstacles and try to get to the end. While it’s a simple style, the execution wasn’t nearly on the same level as what I’m used to seeing in the series. Some jumps that should be very easy end up being quite tricky thanks to the various camera angles. It’s hard to see where you’re going and in the levels where you’re running towards the screen you better have lightning fast reflexes. The gameplay changes at times when you play as a different character. I was sad that the robot style gameplay only showed up for part of one level but that was certainly fun. Maybe it just comes down to the physics engine not being very good which messes with the jumps. I don’t know, it’s hard to pinpoint exactly but making the experience a little smoother would go a long way.

The graphics are excellent here. The character animations are often way out of model but I believe it’s on purpose. Sonic DX for example was very authentic in the graphics and it just so happened that it would become very humorous in the future. For this game I think they were trying to make it as out there as possible and I would say that it really succeeded. I love the designs and mixing that in with the dialogue is perfect. The scene where Cortex’s voice cracks as he talks to his teacher mixed in with the animation was brilliant.

The soundtrack can also be pretty fun. It’s a really crazy one for sure though. Sometimes you’ll have a very tropical theme and then you’ll quickly switch to something that’s pure rock. The changes happen quite suddenly and you can never guess what the next tune will sound like. The shock value may not be enough to make this one of the all time greats, but I would definitely call it a pretty solid array of themes.

There isn’t a lot of replay value here but enough to keep you going. Each level has some gems which look like Chaos Emeralds. So you can go back to the old levels and try to grab them. The hub world is also quite large so you can have a lot of fun exploring. I almost wonder why the game bothered with the hub world since you never really get to walk around it during the story. It was nice that they put in the effort to set it up though so that’s definitely pretty neat. I suppose I would recommend giving it a shot at some point. The game is pretty cheap so it’s well worth the purchase.

Overall, Crash Twinsanity is a pretty fun game. I do feel like the gameplay wasn’t very polished though and that’s what would keep it under the main 3 as well as the recent time travel story. You gotta have clean gameplay to accompany the rest of the title. Still, it’s a fun adventure. The game may be short but you should die enough times to stretch out the length a bit. I’m definitely looking forward to seeing how Crash fares in the next installments. It’s not like the enemies are going to be getting any easier so Crash will really have to focus himself. One thing’s for sure, this Bandicoot is never afraid of charging in since he can’t understand the danger.