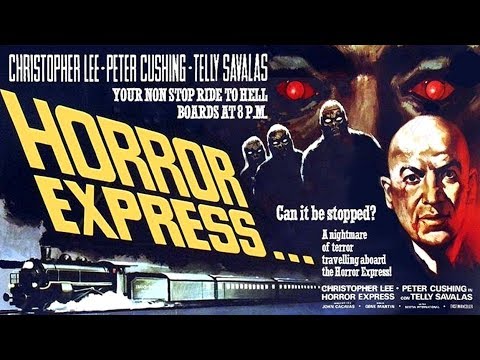 Whenever you have a mummy running around you wanna be careful since the heroes are in for a tough fight. This movie adds some tension by trapping all of the heroes on a train. It’s a pretty nice idea and with the body count growing quite high there is a real sense of danger. Unfortunately the film wastes quite a lot of its potential on going for a very gritty approach. The atmosphere is just right and the villain has a pretty interesting design but these factors are not enough to save the movie.

The movie starts by introducing us to the characters. Saxton has uncovered a rather big discovery and something that he hopes will further his research. He wants to keep this a secret though so he keeps a huge box locked up tight and forbids anyone from looking at it. Then you have the Count and Countess who are aboard this train as well along with a monk named Pujardov who is convinced that there is something sinister in the box. Then you have Wells who is hoping to have a relaxing time here. There’s also a lady who has seemingly snuck aboard without a ticket who convinces Wells to look the other way. We’ve got a whole slew of characters here but then one guy decides to open the box and it turns out to be more than he bargained for. The creature inside it is now unleashed and hungers for brains!

I’d consider the monster to be a mummy for the most part just with how he acts/looks. The whole absorbing brains part is more like a zombie though and then he has the stare of death which is like something out of Dracula. So they’re going for quite a lot with this villain and then the kicker is later on we see he’s from another planet. So really he’s an alien, but you could say that he’s an Alien mummy zombie at this point. You could use all 3 terms and it would still be pretty accurate so that’s neat. The villain can assume many forms and manipulates the cast quite a bit. When you mix in his quick stare of death you can see how he is easily able to overwhelm most fighters.

This is a horror film that loves showing everyone get murdered for as long as possible though. Prepare to see all of the characters get choked for a long time with epic zoom ins as they try to fight back. Everyone dies rather bloodily and there is a big body count here. We also see the characters run autopsies on screen which can be pretty brutal. The effects are on point but if you’re not a fan of scenes like that then you definitely may want to take a step back here. The film doesn’t shy away from these scenes and can definitely get pretty graphic.

As for the characters, Saxton is definitely quite sure of himself and has no real sympathy for anyone. He’s no hero so it’s an interesting change from what you would expect. I found him to be pretty fun even if he was part of the problem for the heroes during most of the movie. If he was a little more reasonable then things wouldn’t have gone this far. Then you have Wells who is a lot more heroic and willing to help out. He’s not exactly thrilled about this going on while he’s trying to enjoy the ride but at least he actually wants to help. He comes up with some good plans as well and helps make most of the discoveries on what is going on here.

The Count doesn’t get much of a role except to wave his death flag quite high. The Countess’ role is significantly larger as she gets very close to the action. Near the end it feels like she’s just running from zombie to zombie but she never fainted or anything like that which is good. You’ve got the monk Pujardov who cracked almost instantly. He’s definitely not someone that you want to have your back because you just couldn’t trust him to protect you when it counted. That’s the kind of support that you just don’t need. Then there’s the inspector Mirov who meant well. It’s always good to have a cop on board to try and keep everyone calm. At least he got a shot off which was definitely appreciated. Likewise you had Kazan who was a lot more extreme but at least threw a knife at the villain and even got a few shots in so tht was pretty impressive. just a little more and he could have won.

Of course, you do have to question how likely it is that this villain would be down for long. He is effectively living energy or a kind of being that is not physical the way that most are. I even doubt that in the ending of the film he is truly gone. These kinds of villains always seem to regenerate and try again in the future. Still, the heroes did pretty good. At least the fact that he has to body hop when the vessel is injured enough is a decent weakness since it buys you a lot of time to escape. The second half of the movie switching to more of a thriller on wondering which body was currently housing the villain was a nice approach.

Overall, There was definitely a lot going on in this train. The Horror Express is an interesting movie and one that is pretty unique. It’s very rare that you have a horror/survival film that takes place on a train. I’ll give the film kudos for that but ultimately it will still be doomed to a low score in the end. The violence can be over the top quite often and the surgery scenes don’t help matters. At times the film is just more focused on the shock value then on actually moving things forward. You could have easily handled this film a lot differently and would have come away with a superior plot. If you’re a huge fan of survival stories and don’t mind the violence then I would recommend it but otherwise you should check out a different option like The Green Slime.