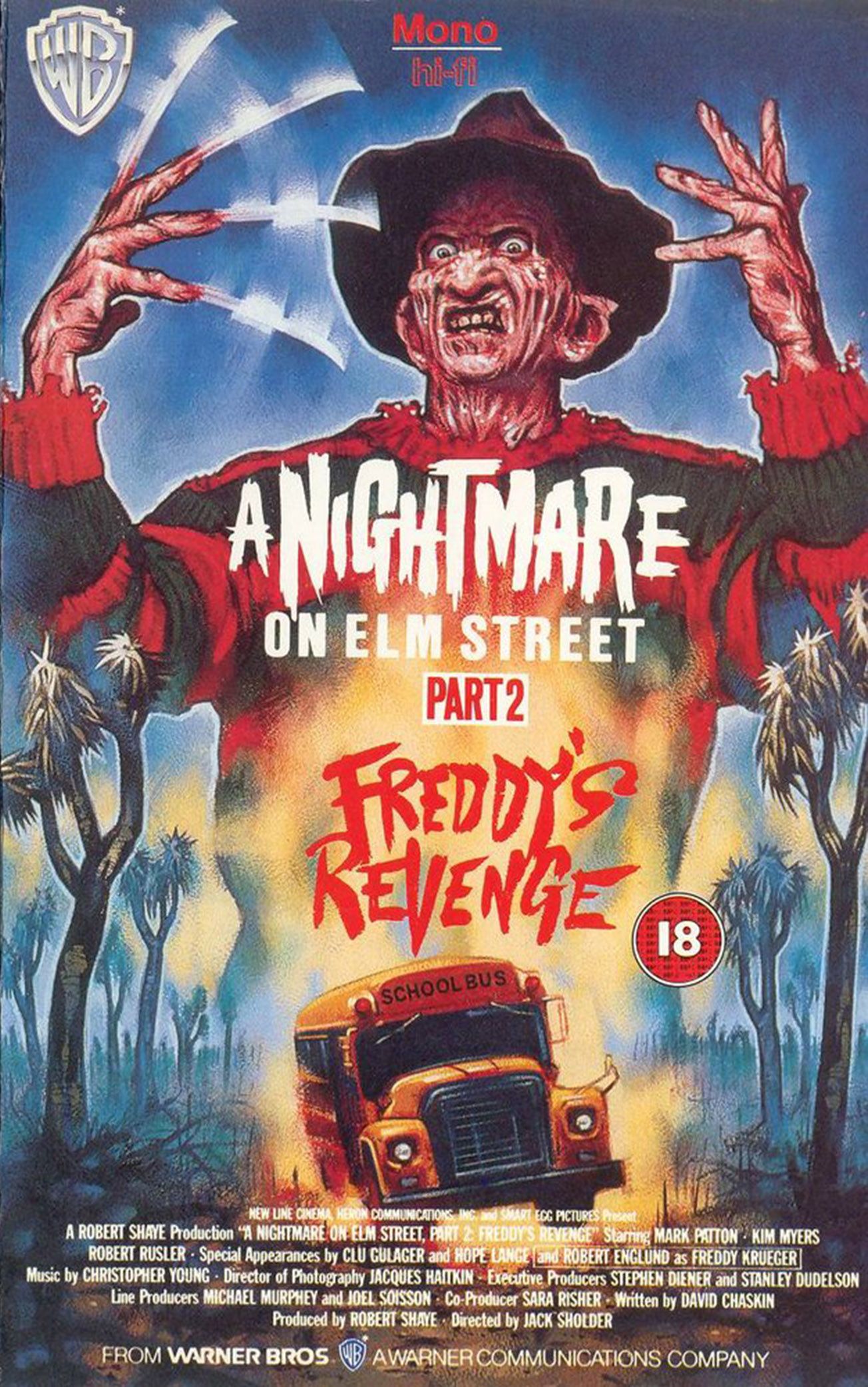 Well here’s the sequel to the first Elm Street. Naturally you can’t expect good things from this one. In fact, it’s even weaker than the first film. It makes pretty much all of the same mistakes only this time it also adds in some animal violence to keep things dicey. You’ll be shaking your head the whole time and once it’s over only then can you relax and hope that the next films will surpass this one. There’s only so far up you can go in this genre of course but the attempt is the important part right?

So the events of the first film are left rather ambiguously here but my headcanon is that the twist ending was real and then Freddy quickly managed to fudge the story a bit. Our new main character is a boy named Jesse who has been having nightmares of Freddy murdering him every night. That’s got to be pretty rough since it keeps happening. I do have some questions here though like why he isn’t actually dead yet. It’s not a plot hole though as you can easily explain it as Freddy choosing not to make the damage real since he wants Jesse as a host body. It’s definitely a different plan this time. Freddy wants access to the real world and this is the easiest way to do it. Can Jesse resist his influence or will be start going around murdering everyone in his path? Either way there is no easy way out for Jesse so he’s going to be in for a rough ride.

As always the film goes all in with the over the top violence. Freddy definitely isn’t playing around here as he murders a ton of people in the real world. More so than in the dreams this time. His powers have also improved now that he has a physical body to the point where he is able to manipulate reality such as when he created dogs with human faces or when he caused the birds to go crazy and attack the main characters. Of course this was just a cheap way to rope in some animal violence into the film. I knew the film was getting desperate to be edgier than the first film but I didn’t think it would go this far.

The idea of Jesse being possessed by Freddy here is also unfortunate since it means that his character goes down as well. At least he was able to stop himself from taking out the sister and the rest of his family though. That would have definitely been another step too far. As it is the film tries to give us the classic kiss of life near the end which is pretty gruesome to watch especially thanks to the design. It makes for a really painful climax on top of everything else going on. The film is certainly not opposed to having you cringe as things go on. You can probably guess that the characters weren’t very good here.

For starters, Jesse is not as good as Nancy from the first film. He panics and yells a whole lot but doesn’t actually do much of anything to try and stop Freddy. Panicking is really all that he does and he never accepts help from anybody. This leads to a cycle where he is just doomed from the jump. Then you have Lisa who likes Jesse but it’s all extremely sudden. Does she really know him enough to try and save him after watching the guy murder a bunch of people and lose control like this? She shows a whole lot of devotion at the end to the point where you’d figure that they had been together for many years. I dunno, I had a pretty hard time buying into any of this.

Then you’ve got Grady and I’m not 100% on what the film was going for with him. I suppose he’s just meant to be the more confident guy at school who loves teasing everyone but is actually a good guy deep down. He seems nicer than Jesse in some respects as the lead would usually be the one to panic. You also feel bad for him at the end because there really isn’t anything that he could have done to escape his fate. The whole Xenomorph type entrance for Freddy there was also pretty crazy. Of course in a film like this you’ll always be seeing a lot of tragic deaths. Then you’ve got the Coach who was almost cartoonishly mean to everyone. Especially the main two although he would always catch them slacking off.

The scene with him at the bar was so surreal I thought it was one of the dreams though. So, Jesse runs out of the house and goes a long distance til he suddenly finds himself at a shady bar in the middle of nowhere? From there he is forced to go to school where he runs a bunch of laps until Freddy shows up again. The whole ting was just really out there and the biggest twist was the fact that it was real. Well, I suppose that’s one advantage to being a film that goes into both worlds, after a while you can’t trust anything you see which is the big thing here.

Naturally there is a twist ending here as well. It’s not nearly as powerful as the first film’s ending though. I guess it’s still got the same kind of conclusion but the execution was off. Maybe it’s because the scene takes a while and since it’s obvious that something is going to happen it’s not as suspenseful as the film thinks it is. Still, it’s definitely a pretty crazy ending that’s for sure. I would make the case that the opening scene is a lot more powerful so instead of trying to use a similar type scene the movie should have gone in a different direction. That’s my take on it at the very least.

As for Freddy himself, he definitely talks a lot more here. It doesn’t do anything to make him a more likable character though. At the end of the day he’s still just a really twisted individual who only seems to care about dishing out a lot of pain to everyone. He’s widened the scope of opponents he wants to take out though so now he’s more of an indiscriminate murderer. I couldn’t believe that the heroes missed him at point blank range with the shotgun though. How do you miss at that range? To think that may have been it for Freddy’s host body. Realistically it wouldn’t even slow Freddy’s murders down as he would go back to dream land but still, it was a start at least. I don’t know what the one kid at the pool was thinking with slowly walking up to Freddy and pulling the whole “We don’t have to fight thing”. Was there any way that would end without him getting promptly murdered?

Overall, Freddy’s Revenge is pretty one note and basically the same as the first. Only with even weaker characters and some animal violence thrown in. The writing’s definitely no good and I wouldn’t say the pacing is solid either. The violence is so excessive that you’ll be taken out of the movie pretty quickly each time as well. There are just no real positives to say about the film. I don’t think there’s much you could do to save the franchise at this point so all I can say is better luck next time. If you want a spooky film with more of a memorable villain then I would recommend watching Mask of the Phantasm instead. Now that one will have all the thrills you are seeking!