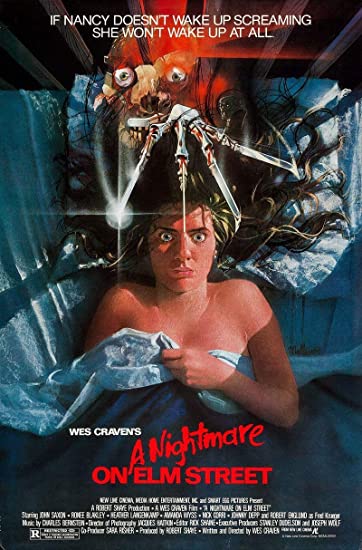 This is definitely an iconic horror film. It’s quite possibly one of the 3 most well known slasher films of all time. It’s certainly had a wide amount of influence and people just don’t forget Freddy that’s for sure. Of course it’s pretty much doomed from the jump because slasher films like this make all of the big film mistakes. The violence is excessive and the characters range from annoying to terrible. Surprisingly this film doesn’t have any real animal violence although the sequel makes sure to fix that. Either way, this is definitely not a movie that I would recommend.

The movie starts with Tina on the run from Freddy and she manages to survive by waking up. She heads to school where her friends try their best to cheer her up. She then has a sleepover but unfortunately that is the last thing you want to try against Freddy so he destroys her and framed Rod. Nancy believes that he is now after her and the rest of her friends. The problem is that he is pretty much unstoppable in the world of dreams and getting him to the real world will be difficult. Nobody believes her so Nancy is effectively on her own. Can she outwit Freddy and put an end to his evil plans once and for all?

One thing that took some getting used to here was that everyone would just call him Fred. I’m always used to using the full name of Freddy Krueger but I suppose I’m just used to that from seeing it spelled out all the time. Beyond that the film really plays out exactly how you would expect. The characters even insult your intelligence the way you’d expect them to based on the stigma of horror characters not being very smart. I’ll definitely get into that in a second because they’re just really bad here. Lets get the obvious negatives of the film out of the way first though.

Naturally the film is incredibly violent. The characters die as violently as you would expect. Freddy takes them all out in different ways. Honestly Rod got off incredibly easy compared to the others. For the other characters Freddy likes to toy with them a lot before finishing the job as well. He even injures himself just to show the characters how insane he is. The self inflicted injuries definitely don’t help Freddy’s case as being an imposing villain either. Once he’s in the real world the characters land a lot of big shots on him. Parts of the climax I wasn’t sure were supposed to be serious or comedic. It’s a bit like Home Alone where Nancy had a bunch of traps laying around and would keep slamming Freddy with each one. It was pretty surreal to watch. The ending still gets tense once she runs out of traps though.

Then you’ve got a subpar character roster holding the film back as well. You’ve got Rod who really makes it easy for Freddy to frame him. He pulls a knife on his friends and even threatens to do things to them. It’s not exactly the best dynamic you could want. Of course you’re meant to know that he’s not a bad guy deep down…I guess. It doesn’t really work though. He and Tina are also pretty inconsiderate to Nancy and Glen who are just trying to have a good time downstairs. The nightly affairs are another slasher trope as it usually serves as a death flag to the characters. You have to stay strong and they did not. The characters are just really irresponsible. Only Nancy manages to hang in there.

Lets look at her parents for example. When the dreams get worse her mother takes her to a place to analyze them. We then see that the computer screens go haywire and she even manages to grab Freddy’s hat. So, in context Nancy just woke up from a dream with a bunch of cameras watching her as well as the main doctor and the Mom watching through the glass. They know that she didn’t get up or do anything beyond struggle there. When they see the new wounds appear out of nowhere and a hat generated from oblivion which belonged to someone the Mom personally murdered a while back…they don’t suspect anything? It’s got to be one of the craziest moments out there.

Usually you may be annoyed when the characters don’t believe the lead but at least they have decent reason to. Whenever there’s an alien invasion or a monster attack you may have someone not believe that it’s going on, but fine you have some excuses there. They didn’t see it, government conspiracy, etc. Here this is literally happening in front of their eyes and they aren’t doing anything. It’s hard to buy. Rod’s version of events was also pretty shifty as he saw Tina getting murdered in front of her by an invisible force but sticks with the “I didn’t get a good look at the guy” story.

Now my problems with Glen are different. His issue wasn’t that he didn’t believe Nancy. The problem is that he consistently lets her down every single time. He has one job, to stay up a few hours. That’s it. Nancy has had to stay up for several days in a row at this point and she’s still doing her best to get to the bottom of this. For her plan to work she needs Glen to wake her up at the right time. Instead he falls asleep on the job….2-3 times in a row. The worst time is the final moment because his Mom wakes him up and he sees that it’s only 10 minutes until he is supposed to go find Nancy. Instead…he goes back to sleep and is promptly murdered. He really didn’t do a single thing to help Nancy and you’d think that he really would if he cares about her as much as he said he would. Falling asleep that many times is inexcusable especially since her safety is a concern here. He fell asleep the first time she asked him to help, the second time, and then the third. If I were her that relationship would be over on the spot.

Nancy really has to do everything on her own but it’s just an issue that it got to that point. Freddy is a lot sloppier than most villains so he leave behind so many clues. It would have been nice if someone could have actually helped out. Nancy’s father also fails her at the end of the film when he gives her his assurance that he’ll be there and then promptly leaves because he didn’t mean it. It’s all pretty rough for her. It makes for a lot of tense moments since she’s really running for her life but it all just feels like a big betrayal.

Freddy Krueger gets a dark backstory as you would expect to cement the fact that he’s definitely a cheap villain. He only picks on the weak and that’s how he has built his whole empire. Think about this, the parents are the ones who murdered him and he’s still going after the kids. He’s definitely an awful villain no matter how you slice it. As always the film does have a twist ending so you’ll want to prepare yourself for that. It’s a staple of the horror genre and you really need one if you want to compete with the others. It was pretty fun I’d say. Definitely rather sudden so it comes out of nowhere and really leaves you hanging. The execution was absolutely on point.

Overall, Nightmare on Elm Street is exactly what you would expect. The plot plays out just like any slasher with the villain bumping everyone off until the lone heroine finally thinks up a plan to put an end to the madness. The violence is through the roof and you’ve got a very weak cast of characters. There aren’t any real positives to say about the film except that it does keep things pretty intense throughout so it fulfills its role as a thriller. Freddy’s design is certainly grotesque to make him scary but it’s not a design that I’m personally a fan of. Give me the Scream costume any day. If you want to watch a spooky film then I highly recommend checking out something like the House on Haunted Hill instead.