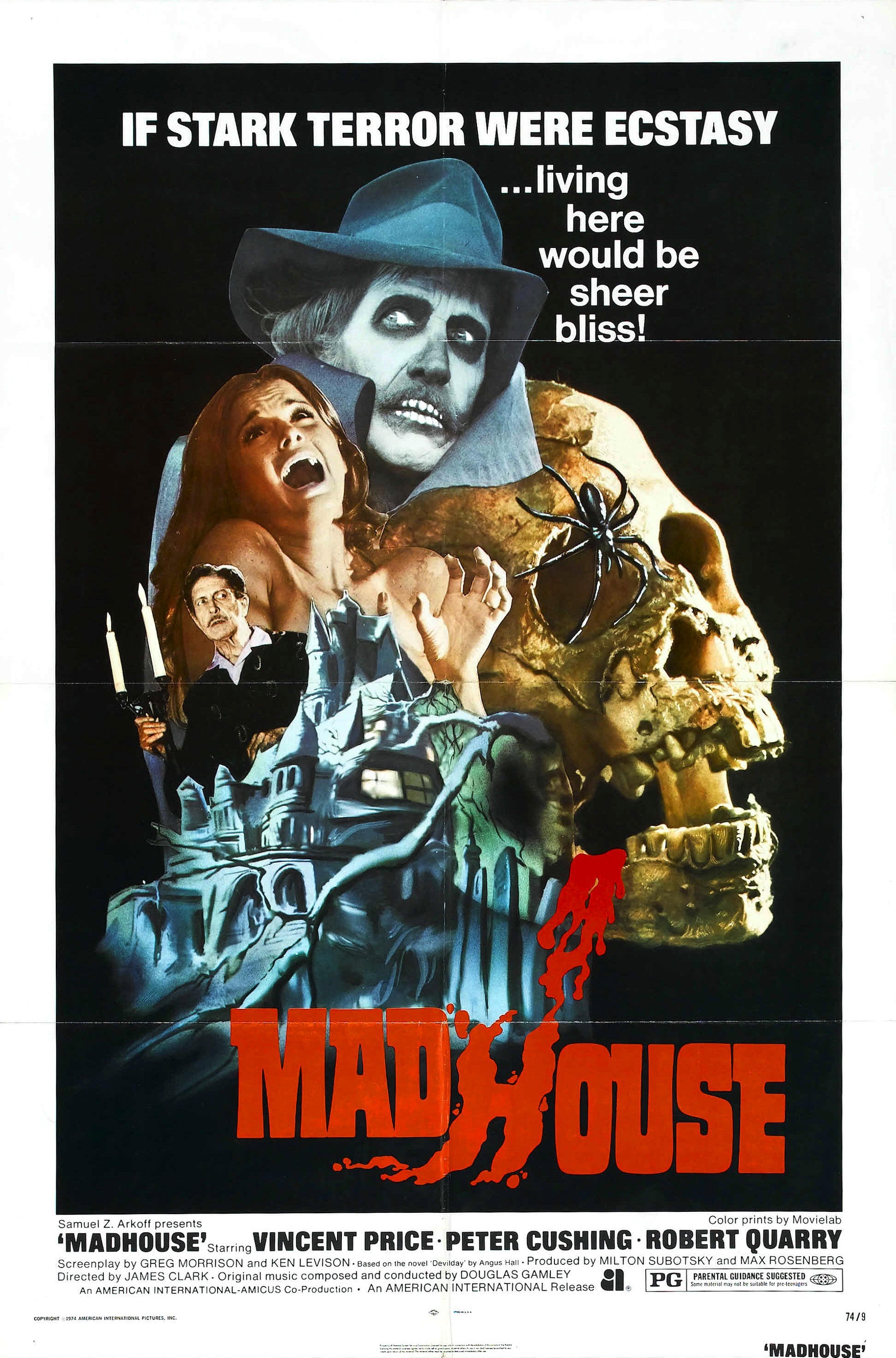 Madhouse is one of those films that makes for a pretty engaging watch as you try to figure out who is responsible for a slew of murders going around. Its main weakness though is in how the plot only really works if one character makes all of the wrong moves. Switch him out and everything very quickly begins to change. Either way it is a pretty solid film though and doesn’t go for a whole lot of shock value here. You’ve just got an interesting adventure the whole time with a pretty surprising ending. You may not see some of the laughs coming.

The movie starts with Paul having yet another big film hit. He’s about to be on easy street and he is even getting married to a lady named Ellen. Everything is going well but then he finds out that she was an actress in rather mature work and allows another guest to bait him into throwing a fit. He takes a nap and goes to apologize later on but Ellen is dead and it looks like Paul is the one who did it. Unfortunately he doesn’t know what happened and thinks it’s possible that he did destroy her. This leads him to get some therapy on it. Years later his best friend Herbert invites Paul to don the mask once more and become Dr. Death for a TV show. When people start dying, Paul wonders if he may be doing this.

You can see how the whole mystery angle wouldn’t work if Paul really knew what he was doing. After all, the others can’t mess with him if he’s sure of himself right? You also feel like Paul should be able to recall at least sometimes what had happened. I feel like he cracked a little too easily which is unfortunate. He comes across as a pretty confident character otherwise. You also have to give him credit for not falling for any of the many temptations that would try to get in his path. Paul did well, he ultimately just couldn’t conquer himself. Still, Paul makes for an interesting main character at least.

He probably just should have gone with his gut and stayed home though. Maybe returning to films and shows would be a good thing but as Dr Death? Seems like a bad idea so thanks Herbert. Herbert gets a fairly big role here as well. He’s always enjoyed being a writer and it was his idea to reintroduce Paul to the world. He even gets Paul all of the old Dr Death films to he can rewatch them again to get into the role. He’s definitely quite enthusiastic about the whole time. You’ve also got a few other supporting characters like a director who helped cause Paul’s insanity in the first place. The two characters still don’t like each other at all but are willing to work with each other for the money. Then you have Julia who is the PR head. She tries to make sure Paul can get through this in one piece and sees to it that the media doesn’t hound him. She’s pretty good at her job and definitely has a more active role compared to most of the characters.

There are a pair of shady characters who have a backup villain role here. They’re not the brightest minds on the planet though. So, they’ve decided to try and blackmail Paul, a guy who may be a serial murderer. They go to his house on their own to keep messing with him and then forget their own bargaining chip in his front yard. What? Seems like a pretty bad idea since once he has this then they have no leverage. They they see him putting on the costume and still make the call to walk into his dark manor while he is not responding to anything they say. You can probably guess how their plot ends. They sort of came out of nowhere but I suppose it was a way to increase the body count without losing any more main characters so suddenly. They may not have been very smart but that still made for a pretty fun plot point. I was definitely up for having them in to keep the suspense.

A character addition that I didn’t think was necessary was Faye. She’s an actress who liked Paul but he would never give her the time of day. She ultimately sunk quite low in her despair and is a shell of her former self. She seems pretty crazy at this point and is super fascinated by spiders. It makes for a lot of disturbing imagery that’s for sure. I can’t say that her character was really a hit for me. As it was we already had quite a big cast all things considered. Still, it added another suspect which is probably what the film was going for. As it stands there were probably around 6-7 suspects here so you have to decide who you think the culprit is and that includes Paul himself. You may be able to guess the right person pretty quickly or you may double think yourself and choose someone else. Either way guessing is the fun part of mysteries.

Overall, Madhouse was actually pretty good. I wouldn’t say it was great or anything but I thought it was pretty interesting. There are quite a few deaths but the film doesn’t go out of its way to make them super bloody or violent. They just happen and each time Paul is left more and more depressed. His first yell was certainly something as the film even gave you a long zoom in. We also get to see the cops show up from Scotland Yard to take care of things so that was fun. It’s always nice to see them trying to put the pieces together. The whole glove angle was a fun little gag as well. The film definitely had some humor during this adventure. It never was enough to break the atmosphere and instead made for a nice ambiance. I’d definitely recommend checking this one out if you like murder mysteries like this.