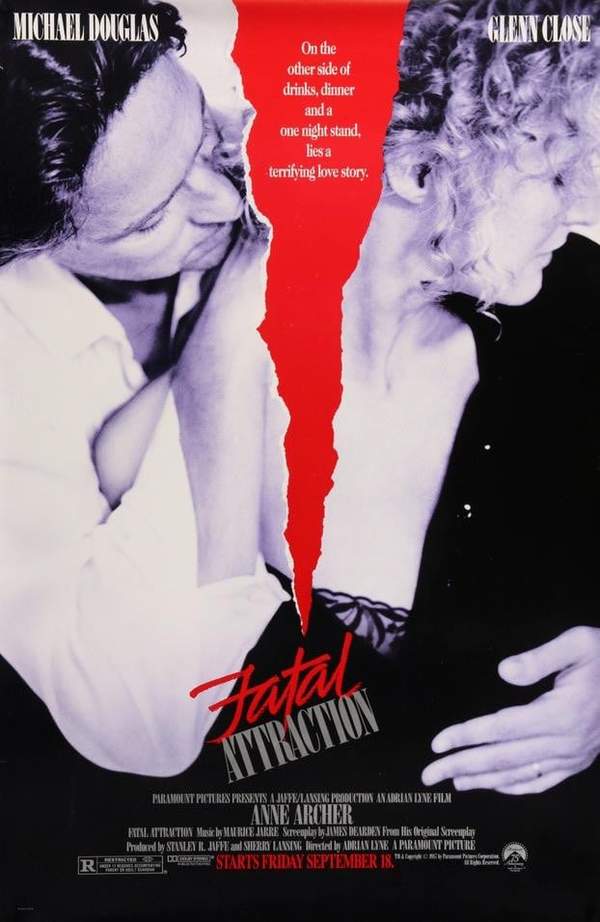 Fatal Attraction is one of those films that makes it really impossible to be all that sympathetic to the main character. He makes a ton of mistakes throughout the film and ultimately has to live with the consequences. It’s a nice cautionary tale about how a one night stand can quickly wreck your entire future going forward. It’s definitely not a romance film I would recommend and works as a complete opposite to People Will Talk. If that film depicted one of the most wholesome romances out there, this one would be one of the more sinister depictions.

The movie starts with Dan attending a party along with his wife Beth. Things have been going pretty well for the two of them over the years. They have a kid and a solid home environment. Dan is also making pretty good money as a lawyer. Unfortunately Beth heads off for a day to go check out a house they are interested in buying. Dan can’t imagine the thought of being alone for a night so he quickly makes an advance on Alex, a lady he has only known for a few hours and they have a one night stand which quickly becomes 2. Dan then decides to cut this off with Beth being back but Alex won’t accept this. She says Dan has to stay with her and her upcoming kid or she will continue to wreck his life. She goes from spamming his phone to outright murder and kidnapping. Can Dan really stop her or will this be game over for him?

So there’s no way to sympathize with Dan here. The guy just makes mistake after mistake which comes back to bite him. He knew exactly what he was doing at all times so lets keep that in mind. It’s not like this was some accident, he was drunk (Which is still no excuse) or he was alone for months and slowly started to crack. It was a single night…he hadn’t even gone home yet so more like an afternoon before he cracked. The guy had absolutely 0 loyalty to his wife Beth and that means his bond was never as strong as he thought it was. He also doesn’t prioritize his dog as he even forgets to feed him/give a walk the first night. That shows that Dan also isn’t responsible.

The movie definitely makes sure to show what a hopeless path Dan has found himself on. Unfortunately the film decides to throw in some animal violence as well as when Alex murders their rabbit. Did we really need to see this? At this point Dan still does not immediately call the cops on her. I suppose getting fingerprints may be difficult but I’d like for them to have at least conducted a search, see if you can come up with something. Alex had quite the rap sheet by the end when you factor in the kidnapping. It’s why schools always got to have a very strict policy about who is allowed to take a kid off the premises. If you’re going to have someone different pick up a kid then there have to be agreements and something in writing saying that this person is allowed to take the kid. Someone just saying it isn’t quite enough.

Beth was a solid character. She had no reason to suspect anything during the film. As far as she knew Dan was just a faithful husband going about his business so the whole thing definitely comes as a big shock. I don’t really see how she can ever forget that so I don’t see things going well after that. The kid was too young to really contribute anything to the film but did add to the tension later on. Dan’s friends were pretty reasonable. They had some good banter with the leads and even Dan’s co-workers were pretty reasonable. It shows how much he threw away during all of this.

We do get an action scene at the end of the film though so it ends on a bang. Dan looks pretty bad during this fight though and I also have to suspend a lot of disbelief for his not hearing anything with the tea kettle on. Tea is fairly loud but not quite That loud. I also thought Beth could have fought a little more as she was mostly just frozen in shock the whole time. There’s quite a bit of back and forth here though. For the most part the film’s about mental warfare but I suppose the actual ending wanted to shake things up a bit.

I wouldn’t say there’s a whole lot to like here though. The plot itself ensures that there are few likable main characters. It’s always tough when a film has a main character you just can’t get behind because you’ll be seeing him throughout so that can be tricky. The romance itself is naturally pretty bad as well. It was definitely an ill advised affair from the start. The writing is okay I suppose but nothing out of this world and the pacing is also fairly standard. The animal violence didn’t do the film any wonders either but even without it this just seemed like a recipe for disaster.

Overall, Fatal Attraction is definitely a reminder on how all actions have consequences. Dan thought he could hide from his but at best that will just delay the inevitable. After a while you have to own up to things although ideally in less of a theatrical fashion. At least the film had the restraint to not have anything happen to the dog or that would have definitely hurt the movie even more. As it stands, if you want a film about quality characters with a good romance then I would recommend People Will Talk a whole lot more. As I mentioned in the beginning these films are polar opposites so with as good as People Will Talk ended up being, it makes sense that this one couldn’t reach those levels.