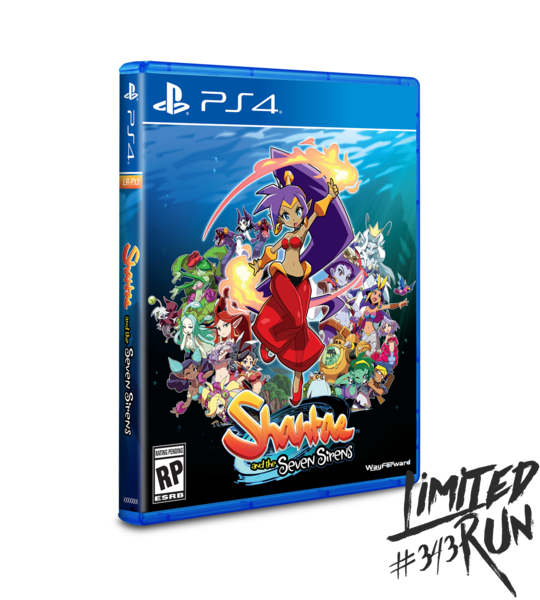 Shantae has had a pretty fun gaming history over the years. While her games did not start off very big, they’re now titles that are at the top of the Indie charts to the point where you probably could call her mainstream nowadays. The best title in the franchise is still Half Genie Hero if you ask me, but the Seven Sirens is a great follow up. It’s always nice to see the characters get together for some more adventures and the new Siren characters are pretty solid as well.

The game starts with Shantae and her friends going on vacation. They’re looking forward to having a peaceful time away from their usual save the world adventures. Unfortunately it won’t be as easy as all that. It turns out that there are a bunch of other half genies so now Shantae isn’t the only one. This is great except that they are all promptly kidnapped. Shantae is once again the last one standing but this time she has a chance to save the others. She’ll have to travel all across the island and an old villain by the name of Risky Boots has shown up which complicates matters. Risky always has some kind of purpose behind her actions and Shantae is going to need to figure out what that is before it’s too late.

The gameplay is that of a classic platformer but it’s got Metroidvania elements to it as you will often have to go back and forth in the map as you search for things. You start the game off with no real powers and every world you learn 2. For example, when you start the game there will be large pools that you can swim in but once you unlock the frog ability then you can go back there. It’s unlikely that you will memorize all of the different routes so you are highly encouraged to go back through each area when you gain new abilities. At times the map will show you where you need to go next but usually it’s more about trial and error. At one of the 3 towns there will usually be someone who can give you a hint though.

Your main attacking option is your hair. It’s a pretty quick attack that deals a lot of damage. At the shop you can buy an upgrade to make it faster or to make it more powerful. If you earn enough coins you can quickly max out both stats which makes a big difference in the battle. The rest of your abilities are explained as you learn them which includes shooting electricity, seeing invisible objects, and causing tremors. One ability allows you to heal yourself or cleanse poisoned water which is really handy. You can also buy magic spells like fireballs which can aid you in gameplay although they’re never as effectively as your classic hair blows if you ask me.

The boss battles can be pretty tricky at first until you remember that you have items. So at first I was just spinning my wheels without any backup assistance. No magic or items, just my platforming skills and hair. That’s when I realized that something just wasn’t quite right. It was then that I realized I had been holding myself back for quite a while. With the items the game becomes a whole lot easier to the point where you should not lose again. Not only are items so common that you should have all food maxed out pretty quick but you’ve also got your healing spell which takes up virtually no energy and heals you thoroughly. Your magic meter also regenerates pretty fast as long as you have the proper equipment on which you unlock near the middle of the game.

So the game should not pose a challenge to you as long as you remember these key elements. At that point you will be all set for action. So the gameplay is nice and fast paced which should keep you entertained at all times. The story is also pretty fun. The Squid is definitely my favorite character now. Not only is he just a fun guy but he’s got a great character theme as well. His story is rather tragic if you think about it. He really just wants to be successful and he’s trying to do it the right way but it’s just been tough for him. Hopefully one day he’s able to get that spinoff game that he’s always wanted. Shantae is a fun lead as always too. She may be a little starstruck at the other half genies but at the end of the day I would take her in a fight. Risky Boots is also a solid villain who never underestimates anyone. She just uses whichever characters are around and that’s the hallmark of a talented villain.

The graphics here are definitely real solid. The art style is excellent and is part of the game’s charm. It’s all definitely as colorful and vibrant as can be with a lot of good level backdrops. It may be a little more limited than the previous installment since you’re mainly stuck on the island the whole time but it’s a good locale in general. The soundtrack is also very good. You have some remixes from past games and then a lot of original tunes. They all bundle together for a solid array.

The game’s length is around 6 hours or so but there is a good amount of replay value as you grab all of the collectibles and aim to grab the PS4 trophies if that’s the version that you got. The toughest trophy will probably be the speed run entry since you have to complete the game very quickly. It can definitely be done if you put your mind to it though. Platformers usually aren’t super long or anything so 6-7 hours is pretty standard I’d say. You’re getting a good purchase for your buck.

Overall, I’d recommend picking up Shantae and the Seven Sirens. It’s a fun game with a pretty engaging plot and definitely a solid cast of characters. This is a game that’s very easy to pick up and play at any time. The overall atmosphere helps to keep the game calm and interesting from start to finish. I do hope they keep the Shantae series up with quick releases because there’s always a whole lot you can keep doing here. The game ends on what I would consider a cliffhanger after all so I am expecting another game at some point. In the meantime I suppose I just have to wait until she makes it into the Super Smash Bros series.