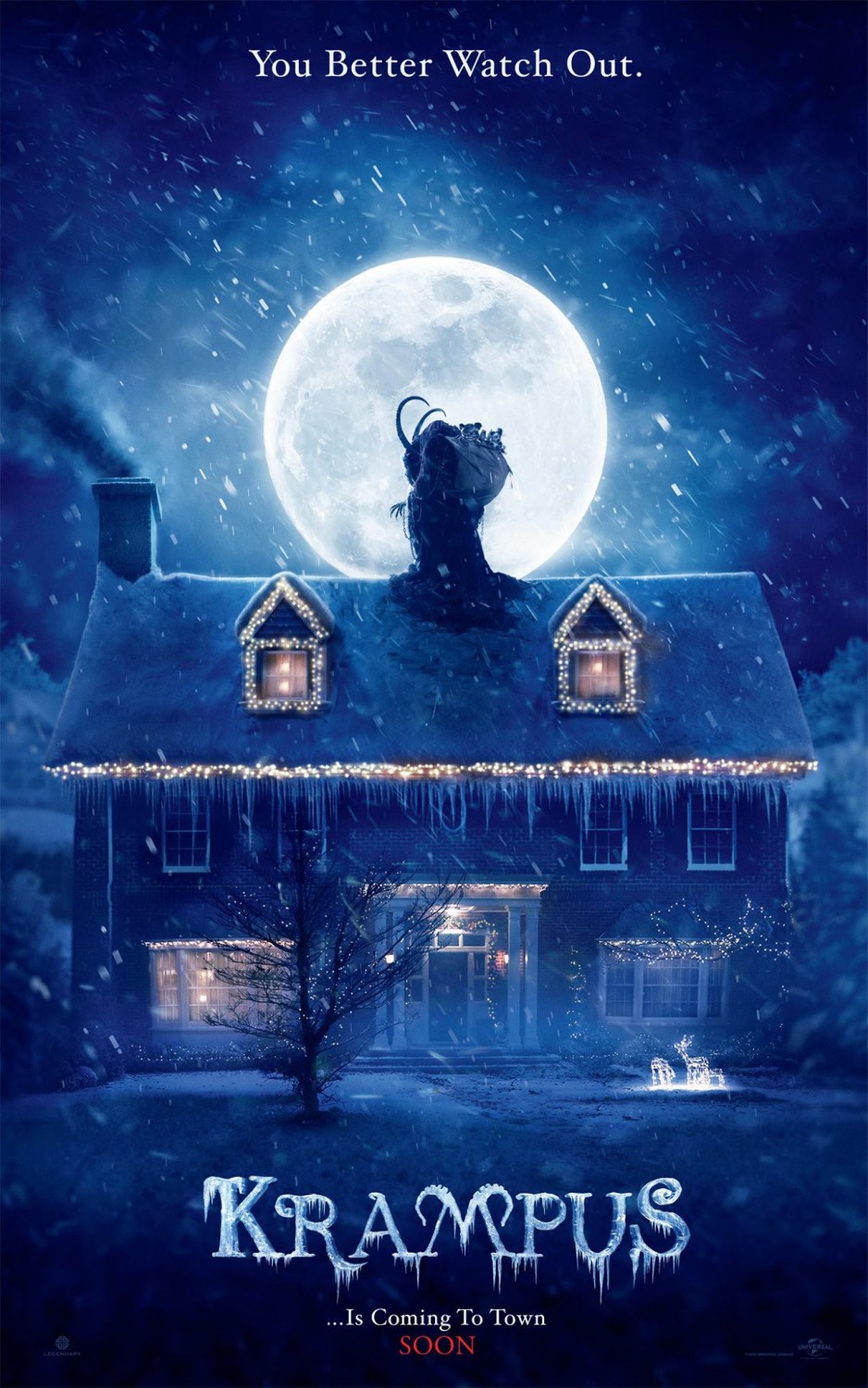 A Christmas film that’s actually a horror title is pretty interesting. It’s certainly not a blend you see very often. I can understand that though as ideally when you think of Christmas movies you’ll think of items like Jingle All The Way or Christmas With The Kranks. After that then you gear up for Halloween in October with the big spooky titles. Well, Krampus is a pretty interesting idea and the film executes it fairly well. The human characters tend to mostly be unlikable though so it’s easy to see why Krampus arrived.

The movie starts with Max getting ready for Christmas. He’s determined for it to be a good year but unfortunately it does not start out well. He gets into a fight at the school play and then when he gets home his parents start bickering a bit. Nothing serious but then his cousins arrive and they’re a bunch of the meanest characters you’ll see around. They torment him for a while until Max throws his letter to Santa out the window. This ends up summoning the demon known as Krampus. He is accompanied by the Elves, Gingerbread Man, A bear who is basically Freddy from Five Knights at Freddy’s, A Jack in the Box, and more. Can the family unite to take these guys down or are they ultimately all about to meet their end on Christmas?

The family is incredibly split apart right at the start so you can probably guess that they aren’t good at the whole teamwork thing. As mentioned, most of them are just pretty awful. Even by the end you aren’t going to like many of the characters. The kids from the cousin’s side are all pretty painful of course so I don’t even need to talk about them. Their entire purpose in the film is to just be annoying and get in the way the whole time. You know that they don’t truly stand a chance at any point in the game. It’s just the way that it goes.

For the real main characters, Max gets one of the biggest roles for sure. He at least believes in Santa a lot more than the others. Of course for Krampus it’s more about personal sacrifices and all with his understanding of what Christmas is. Regardless, he was not pleased with Max by the end and made sure this was known the whole time. The others were really on his hit list from the start but it’s interesting because in a way you’d be safe if you never believed in Santa from the start. He only shows up once you turn away. Then if you’re just an innocent bystander outside you’re really doomed. Those guys were just minding their own business and still got mixed up in all of this.

Tom and Sarah do a decent job trying to get things back on track the whole time. I wouldn’t say they do a superb job but at least they talk back to the cousins at times. Tom half heartedly defends himself a bit like with the whole scouts thing and at least he said Sarah’s cooking was done. He doesn’t really get to shine further until the villains arrive and he fights with his gun. He does last for a bit which is good although ultimately he is heavily outnumbered. The villains not being bullet proof at least gives the heroes some hope. Meanwhile Sarah also steps up when needed. She doesn’t fight with the axe as long as her sister Linda but everyone does get to contribute in the end.

I do think Max brings up a good point of why they had to invite the rest of the family if they don’t get along at all. It sounds like that’s just asking for trouble. Maybe have more of a quiet internal Christmas celebration especially if they’ll be inviting other members who were not invited. Tom didn’t really have a good counter to that question and I think it was worth bringing up. Inviting everyone simply out of tradition is a bit iffy.

Howard and Linda are definitely not meant to be all that likable either. Howard’s whole obsession about being a tough guy and having a lot of guns does come in handy though. At least it meant that the heroes would be properly armed for this scenario. Tom was surprised that Howard brought guns on Christmas but I wouldn’t blame him there. If you’re equipped with guns then the whole point is so you can have them if you really need them. Of course that should include road trips. Both of these characters have some really solid moments during the action segments but it isn’t enough to make you forget what went on earlier. That’ll still be fresh in your memory.

Dorothy is the crude aunt of the family who is always ready with a dicey line. She says what’s on her mind at all times no matter what kind of damage it could do to everyone. I definitely can’t say that there’s anything admirable about that though. Being honest is great but it’s no excuse to be rude either. Then you have Beth who is low key the most reasonable member of the family. At least she tries to stick up for Max at times although she should have just let him snatch the paper back and run interference. At least she was doing something though. Going out in a huge snowstorm is also pretty intense especially by herself.

Then we have Omi but she did not do very good here. She withholds the truth from the rest of the family for way too long until it’s basically too late. Then at the end she didn’t have much of a plan and didn’t look so good. She definitely could and should have played that situation a lot differently. That about wraps up the human cast. So it’s a pretty weak cast to be honest. That’s intentional of course because they try to not let you sympathize with the characters too much in horror titles like this where the villain is going to bump them all off anyway. At least this way it’s a little less emotional right?

One thing the film does really well is with how the snowy backdrop is handled. It’s definitely very eery to see everything covered in snow and so desolate. The place is a true ghost town. The most effective scenes are definitely when the heroes are outside in the cold. Beth’s first adventure out there was certainly intense that’s for sure. Throughout the whole movie there are a ton of solid effects and visuals though. The movie does a good job of that. Even all of the villain designs are on point. Krampus looks intense and his best minion has to be the Gingerbread Man. All of the minions show up from time to time to contribute though. One of the more intense moments was when the whole group attacked at once. I didn’t think I’d see a group vs group fight in a horror title like this so that was a pleasant surprise.

There are some pretty solid action scenes here. It’s a full horror movie from start to finish for sure but the movie has a lot of good atmosphere and isn’t relying on shock value and over the top violence. Most of the violence here is implied rather than shown. So all in all this would be one of the best modern horror films that I’ve seen. The execution was definitely on point. The only aspect of the film holding it back would be the writing. I can’t say that it was all that great or even very good. The characters are mostly all pretty bad of course so that also means a lot of terrible dialogue gets through as well. The characters are always hurling around insults and getting in the way. This is really all from the cousin’s side of the family but it makes for a very drawn out beginning.

Naturally the film does have a twist ending so make sure you watch all the way through. It’s a pretty hype one for sure. I do think there are a few ways you can interpret this one but I certainly know the one I’m going for. Lets just say it involves a loop and I think it’s a nice way to end things off. I could certainly see more Kampus titles just with different characters. It would make for a pretty hype film either way as long as it doesn’t jump the shark. With one like this you always imagine it going off the deep end since the film makers always have to be careful to get a solid thriller atmosphere without things going too crazy.

Overall, Krampus is certainly a different take on the classic Santa Claus kind of films that’s for sure. The idea of a Krampus who shows up to take everyone down is definitely something. If you’re looking for some good thrills and action scenes then this is a decent one to check out. The first act is a little on the painful side though with the characters being as awful as possible. So long as you can get past that then the rest is on point. There’s even a dog who helps out and the film avoids any animal violence so consider me impressed there. If you want to check out a horror Christmas movie then this is definitely the best one to start with.