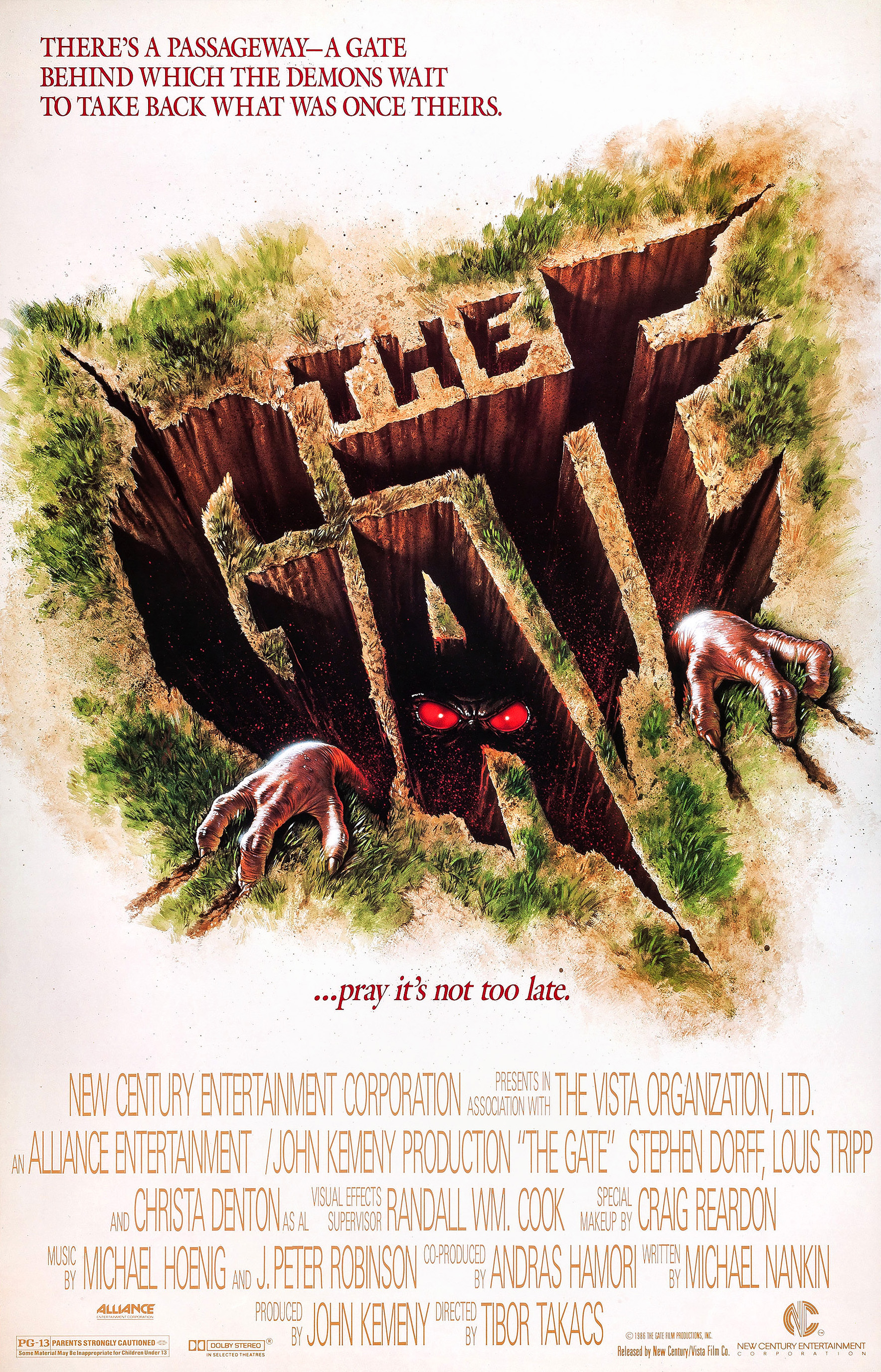 Whenever you find a portal to the demon world in your backyard you know that something’s just not right. Well, that’s definitely the case here as the characters tamper with forces well beyond their comprehension. There are some fun ideas in this one but the film is ultimately held way back by the main characters. I’ll give the film some credit for having very unique visuals though.

The movie starts with Glen having some nightmares but at least the tree is finally taken down. Unfortunately there is now a huge hole there which leads to the demon world thanks to Glen’s friend Terry reciting an ancient chant. See, it turns out that some old records/music tapes actually contain real chants and summons for demons. Wouldn’t have expected that eh? Well, turns out that the battle against the demons has been going on for centuries. With the demons at the ready that means Glen and Terry will have to seal the portal but getting near it without dying will be tough. Also, Glen’s parents aren’t home so his older sister Alexandra will have to do.

In a way this film is sort of mixing Poltergeist with Home Alone. The parents leaving early on ensures that the kids are going to have to solve this on their own with no real backup. It makes sense as having parents around would likely have meant there would be a lot less tension the whole time. Most of the demons may have had some trouble there.

Going into the visuals though, the film goes all out with how the demons can appear. If you try to squash them then they can appear as tons of tiny little rodents. They can possess people, shape shift, and do all kinds of things. It’s pretty crazy. While the film is fairly tame for the most part, it can also get rather violent randomly at times. One such appearance is when Terry gets taken in or even when the parents show up in their deformed states.

The movie goes all in on being a true horror during these moments. The kids being fairly isolated also helps to up the danger feeling. Where the film really falters is with the characters. Kids have a hard time holding up their own film and this one is no exception. Glen tends to be fairly annoying a lot of the time. I’m also not sure why he got so emotional from levitating. It didn’t seem so scary and now at least he got to see some supernatural elements at work.

Glen spends a lot of time saying he wants to call his folks. I don’t blame him to an extent since Alexandra was shredding the rules instantly but it doesn’t help their case of not needing a babysitter. Then you have Terry who is always acting rather edgy. He hasn’t gotten over his mother’s death which is understandable but he definitely is not coping very well. Getting into all of this demon lore definitely cannot be good for him. He also has the weakest scene in the film when he throws the dog while being afraid. A very poor scene to be sure.

The film didn’t need any animal deaths for shock value here. I was like c’mon guys..at least it didn’t get murdered by the demons or anything like that. Then you have Alexandra who is supposed to be the reasonable member of the group and yet she was quick to host a party and just be very immature about the whole thing. She was even willing to leave Glen by himself even though her whole job was to watch over him. It’s not like it would have helped her out in the long run either since Glen would be sure to have said something. Ultimately Alexandra made the right decision and didn’t leave but this was not her best appearance. At least she did tell the friends to go away later on.

The friends in this film were pretty annoying the whole time. They definitely weren’t trying to help in the slightest and were just getting in the way. They didn’t really contribute anything to the story. You’d think that since one of the characters here is actually able to move things with her mind that maybe she would show up to really help out here. Well, I’m afraid that isn’t quite the case. In the end she still vanishes with most of the other characters while only 2 friends stay to act as comic relief and panic whenever the demons get close. The writing is decent although not the most engaging I’ve seen. Again, that’s mainly due to the main cast just being the kids. I think it would have worked out a lot better if the parents were there to keep them in line.

While some of the visuals are pretty inventive like the minis running around, others could just get pretty grotesque and violent like the eye appearing in someone’s fist and then having to be slashed away. Definitely pretty intense stuff to be sure. I definitely wouldn’t be able to give that one a thumbs up. In general while the plot is reasonably interesting, I don’t think there is anything that will really keep you tied to the film. Ultimately it still gets beat by many other films. I’d say to make this film better just age up the characters a bunch and cut away the dog from being part of the summoning ritual. While the ending helps to keep the movie from really going down, there are just too many things limiting it.

Overall, The Gate has some interesting ideas here. It’s certainly a title that you won’t be forgetting anytime soon. It also does give you a nice sense of danger here as the demons are quite powerful and can take many different forms. That helps set them apart from your average supernatural villain. The characters just aren’t good enough to really support this premise and some of the horror visuals can be a bit more shock value than needed. It would definitely get quite out there at times. If you want to check out a horror film involving other dimensions then you can do better than this one.

2 thoughts on “The Gate Review”