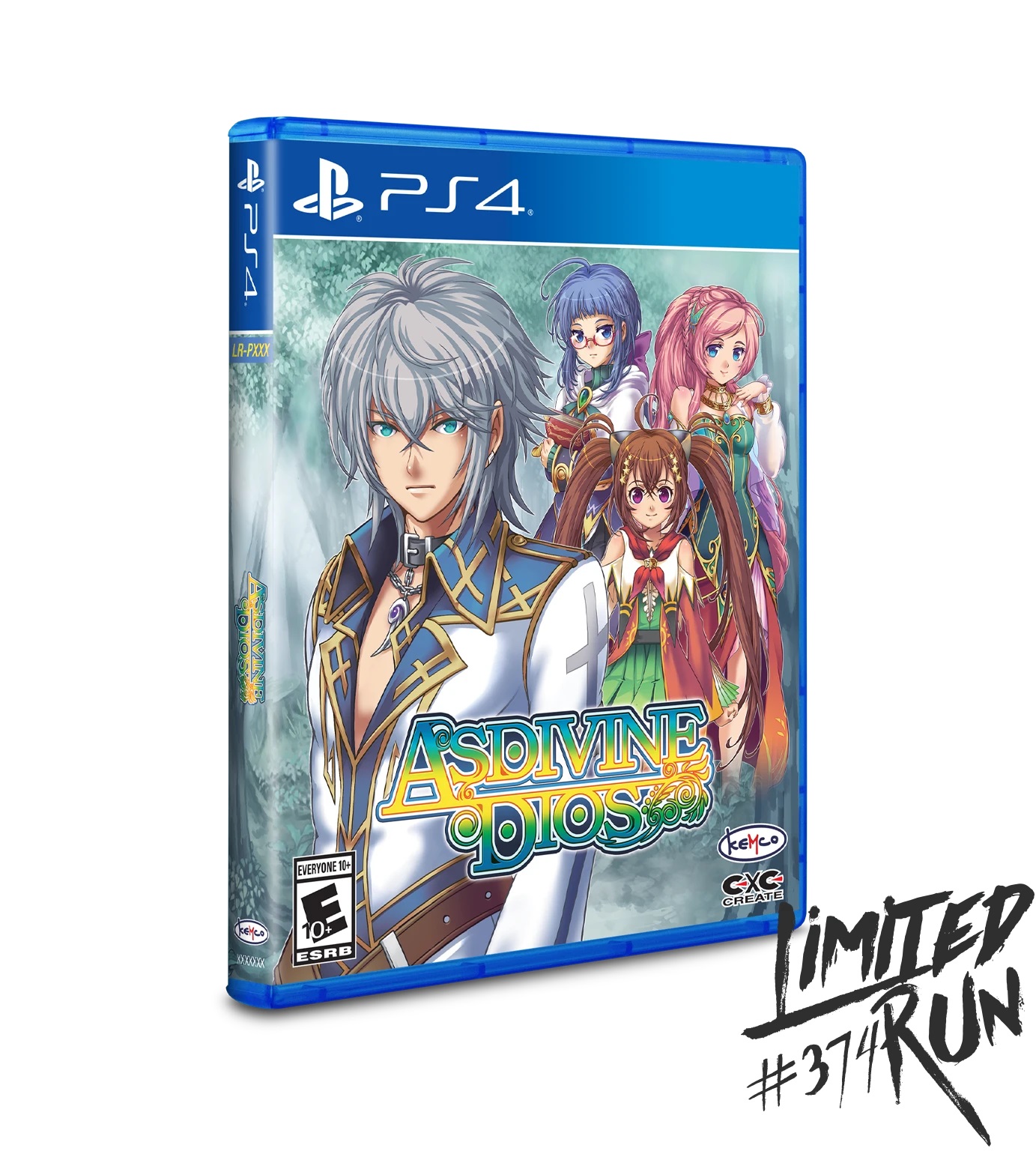 It’s been a while since I played my last Asdivine game but they definitely never get old. The Asdivine series consistently delivers with excellent gameplay and a solid cinematic experience. Pretty much any RPG title could learn a thing or two from this series on quality of life updates. Granted, this one gives you so many different features that you’ll likely be stomping your way through the game but of course you don’t have to use every feature.

The game starts by introducing us to the world of Asdivine. In this world humans exist in relative peace as they are guarded by the guild. The world also contains many spirits and sprites who protect the world from the shadows. Or, at least some of them do. Unfortunately monsters have been attacking a lot more lately. Izayoi, the creator of the world was having an ordinary talk with Iris when all of a sudden he loses a lot of his magical abilities including teleportation. The same is true for Iris as well.

It seems that a human by the name of Odium is going around and destroying all divine beings. One way to destroy a god/goddess in this game is to take down their tree which is what he is doing. Izayoi needs to stop him but without his teleportation that means he will actually have to walk the ground as an ordinary person. He never liked humans in the slightest but he’ll have to get over that now. He will team up with his three most powerful followers, Iris, Minerva, and Friya. Together they aim to save the world and themselves by taking Odium down. Meanwhile there is a guild fighter named Keith who also wants to save the day but doesn’t exactly know who the main threat is.

We’ve got a proper gods vs humans kind of dynamic here and it’s pretty fun. In these things I’m usually with the humans side since the gods tend to be pretty corrupt but naturally it does depend on the setting. In this case the gods do seem pretty suspect like Izayoi basically ignoring the humans for hundreds of years. Based on his character setting it seems to me like he would have let a ton of humans die over the years since he couldn’t care less. Iris likes humans but she really seems to be the exception for the most part. Of course, the humans show their negative colors quite a bit too though like the random mobsters who assisted in murdering a town or everyone immediately thinking the worst of Izayoi.

As the creator, Izayoi isn’t really good at everyday conversation. He’s not sure how to act around humans and is even awkward around his friends. He’s pretty oblivious and lets them beat up on him if it makes them feel better. He definitely doesn’t have the same charisma as Zack from the first two Asdivine games but in fairness that is a very high bar. The original cast was always likely going to be the best. Izayoi gets better as the game goes on but he’s never all that passionate about anything. You’ll probably need to wait for a sequel to really see that.

I found the main cast to be a little on the weaker side as Iris was the only one I was a big fan of. She’s always trying to help out and do the right thing. No matter how often the other members of the group tease or even attack her, Iris always stays strong and keeps on smiling. That’s not exactly an easy thing to do in these circumstances to be sure. She manages to play around a lot while also getting her work done. Minerva is the more serious member of the group who is always taking shots at Iris. She eventually mellows out a bit by the end but it’s not easy to forget all the low blows. She’s also the youngest/weakest member of the group since she’s only around 100 years old so don’t expect her to do a lot of the heavy lifting.

Then you have Friya who is probably one of the more violent teammates you’ll ever see. She’s constantly threatening the other characters and even threatens Izayoi quite a bit. She isn’t afraid to rough him up a bit either if it’ll get her point across. As the most powerful ally, she fears nobody including Izayoi. It was impressive to see her dispatch Odium when he first attacked. Up to that point none of the other characters had been able to do much against him. She’s a powerful ally to have but at the same time, probably not an ally you will want to have with you since you will always be in danger.

Keith is the main supporting character and he’s fun. He’s pretty much a homage to the classic RPG hero. He has a lot of shiny armor/weapons at the ready and likes to talk about justice. He takes some losses but always gets right back up to fight again. It can be hard to reason with him but then you have Izayoi being intentionally vague at times too so a fight was basically inevitable from the start when you think about it. I liked Keith, he was a good rival to have at the ready. The main villain Odium was also really good. He’s definitely one of the standout characters here with the classic goal of wanting to destroy everyone. Effectively he blames the gods for standing by as everyone got slaughtered and now he aims to destroy everyone. The guy is pretty strong but to be fair his plan wouldn’t have gone very far at all without his partner Adusk.

So in a lot of ways Odium was really lucky throughout the game. He also did take his share of defeats so he’d have to keep teleporting away. The heroes didn’t have the best reaction times to be sure but teleporting is pretty much instant, so what are you gonna do right? Adusk doesn’t really have any character personality until the literal end of the game but he is a pretty interesting character. I enjoyed his origin since it makes a lot of sense and added some depth to the game.

I talked about the plot for quite a while so I should quickly talk about some other aspects. Needless to say, the story was a lot of fun. The gameplay is your standard turn based combat system but you are given a lot of freedom. You can turn attack animations off for example to streamline the battles. You learn magical abilities, physical skills, and normal attacks. You can also put your character on automatic but the catch is that he will always use the absolute weakest attack in his arsenal so choose wisely. As for battle strategies, personally I would recommend making Friya the leader over Izayoi because that grants a +5% stat boost to all attributes while he gives a 10% but only to speed.

Then for equipment there is the Berserk talisman which is actually really good. It raises your strength by 40% but the catch is that you can’t control your character. The boost is worth it. Additionally, you will earn ADP every other fight and a lot of buster tickets to exchange for weapons. This is where things get interesting. With the ADP you start the game with 1000 so I highly recommend as your first purchases buying the double EXP, double ADP, and double SP upgrades. That will leave you with around 400 so you can also get double coin or something but after that I would usually recommend the ability seeds. These abilities are key because you’ll be playing literally hundreds of battles as you got through the game so the doubles add up.

Near the end of the game you unlock the S level Buster minigame which can get you powerful weapons that are easily stronger than anything you will find in the story. I highly recommend grabbing these are any cost. It’s all luck based but you should get something good. With these weapons I was one shotting even the final bosses to the point where I made sure to crank up the difficulty to expert which made the final phase of the final boss a lot closer. You really feel like a champ by the end of the game and that’s always fun. There are a few features that the game is missing from Asdivine like triple speed for gameplay but the battles go quick anyway.

If I have one thing to say against the gameplay it’s that the enemy spawn rates are crazy. A battle is triggered every few seconds so if I wasn’t one shotting my opponents that could get old quick. There is an item called Mighty Salt that you can use to bypass minions but you can’t buy it so you just have to hope that you run into it. I think this could have just been made an option in the shop since I had literal millions worth of gold and would have gladly bought 100 servings of it. Pretty minor thing in the end though.

The graphics are really good. The game stands out and really looks top notch. The artwork for the Asdivine games is always super solid though so this definitely does not come as any surprise. Then you have the soundtrack which is top tier. The Asdivine games always have fresh themes that sound similar but are quite different. This is more of the same with each tune being perfect for action and really throwing you into the heart of things. There’s just no way to come out of this one without immediately looking up some of the tracks on Youtube.

Overall, Asdivine Dios is a great game. The main campaign should take you a little over 15 hours and then there are a bunch of trophies and multiple endings to try and acquire as well. It’s definitely something to work towards although I hope there is an easy way to get each ending without having to go all the way back. The gameplay is very streamlined and what I like about this series is that pretty much everything is customizable. You can really adapt the gaming experience to your preferences and have maximum fun. You won’t get lost as the directions are always quite clear. The story is satisfying and I’d definitely like to see these characters return and meet the originals at some point. This game did mention there being a ton of different worlds and universes so it is set up perfectly for a crossover.