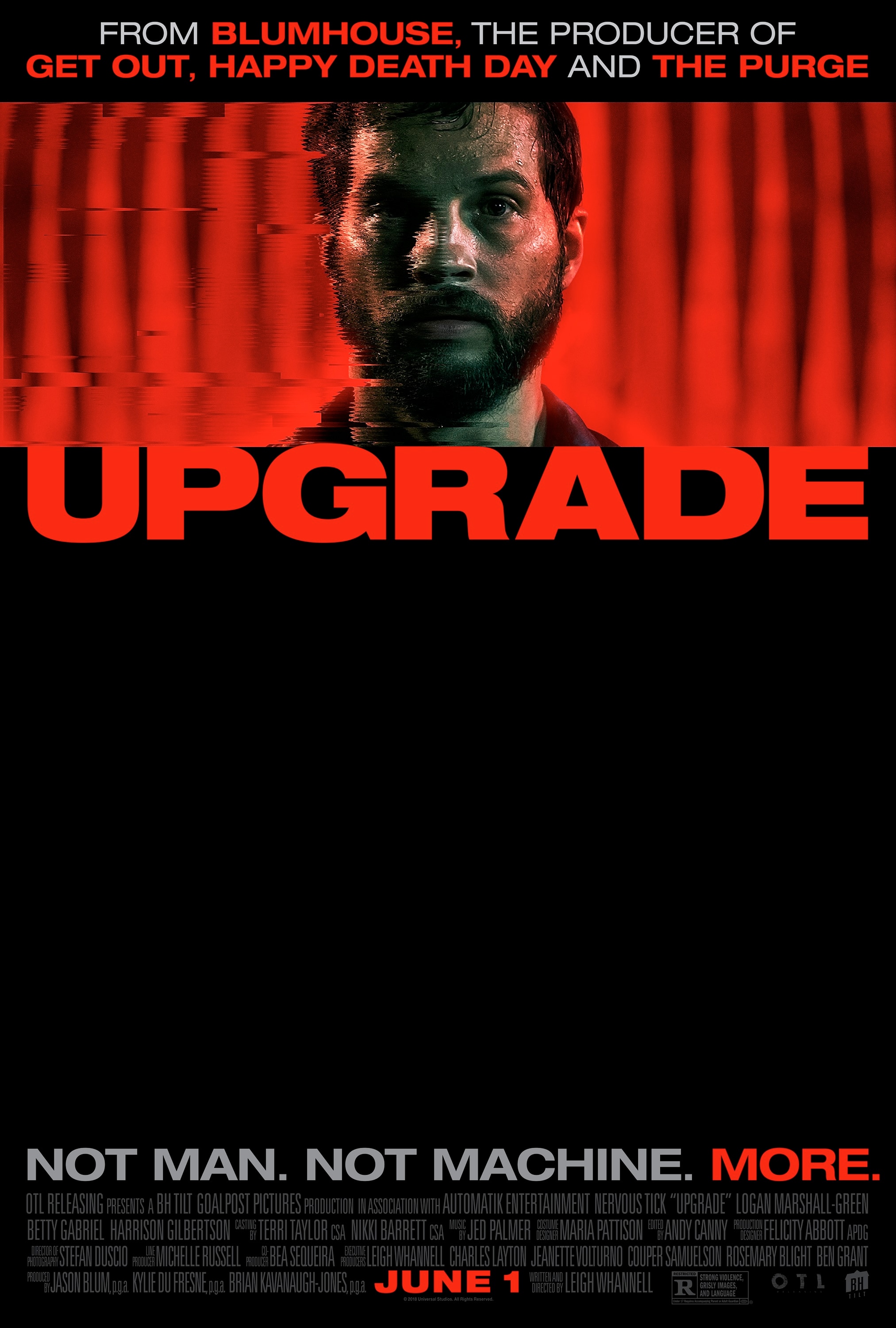 When you think of getting an upgrade you’re probably thinking of going from cheese fries to loaded at Checkers or maybe trading in your PS2 for a PS5. Well, here we take a more violent approach to the upgrade. The film tries a little too hard with making this as edgy as possible so while it’s a pretty good premise, it’s definitely not a film that will have you singing its praises by the end. Not every film can hit the winning home run though.

The movie starts with Grey finishing a car he had been fixing and Asha returning home from work. He wants her to see the eccentric house of the guy whose car he had fixed. It’s definitely an interesting one but on the way home her electronic car malfunctions and both of them crash. Asha ends up being murdered by a group of bandits while they sever Grey’s ability to move his arms or legs. Fortunately, the guy whose car Grey fixed allows Grey to try a piece of experimental new tech. This allows him full control of his arms and legs again except that it is through the program STEM which even talks to him now. Is Grey really in control or is STEM pulling the strings? Grey doesn’t have time to think about it though because while the cops have been unable to find the guys who murdered his wife, STEM has some ideas.

The film clearly takes place in the future with all of the crazy gadgets that are everywhere. You have automatic cars that are incredibly advanced and even the buildings look high-end. Technology is moving pretty fast and Grey resents that a bit because all of the practical hands on kind of tasks have been removed. A.I. control everything now so there is really no escape. However, as Grey notes, criminals still get away with everything so it’s like the extra surveillance doesn’t even matter.

Of course the main plot of the film is about Grey trying to find the murderers and then take them down. Grey isn’t much of a fighter but that’s why STEM is here. STEM is able to temporarily take control of Grey’s body and then allow him to fight at full power. Basically Grey can go on auto pilot mode and let STEM do everything. It’s pretty handy but of course then Grey is actively surrendering his body to something else so is the price too high for this success? That’s the kind of question he has to ask himself.

STEM makes for a pretty interesting A.I. He sounds a whole lot like Hal 9000 so I think from the start everyone is meant to be wary of him. He can certainly fight well though I’ll give him that. He has absolutely no mercy for anyone who is in his way. STEM is the kind of character who figures that straight up murdering the opponents is most efficient so that’s never particularly surprising. These kind of A.I. villains are always interesting so I was on board with this.

As for Grey, he’s not quite as likable a main character. I can see why he wants to avenge his wife so going on the quest to stop these guys is a good start. He does have a habit of throwing up a whole lot though. The film has several scenes of this which is always pretty gross. While STEM does all of the hard work, Grey effectively signs off on most of it by not telling him to stop. Even when he does tell STEM to back off, it’s usually once it’s too late to do much of anything either. So he’s either all in and willing to help STEM murder the opponents or he’s not but the character can be a bit wishy washy about the whole thing.

The character cast is fairly small here as you’ve got the scientist, Grey, STEM, and the murderers. That’s pretty much it. For supporting characters you do have Grey’s mother though and the police agent Cortez. Cortez means well but she is definitely messing with forces that are a little too powerful for her at the moment. Grey is effectively a super soldier with STEM active after all and she would have died instantly upon entering if Grey wasn’t fighting back. Her options are rather limited though since how do you even know if you should take a guy down when he is being controlled?

Where Upgrade falters though is in how unrelentlessly violent the film is. We get a rather long scene of STEM torturing someone to death and all of the fights are pretty brutal as he snaps limbs and destroys everyone he comes across. Get ready for a lot of headshots and other such moments. Even the vomiting all over the place is probably another way to be rather gritty as Grey represents the audience reacting to this level of violence. The fight scene between Grey and another one of the upgraded humans was definitely good though. At least that had a lot of good choreography the whole time and made for a good back and forth battle.

It was like a comic book fight which is good. Whenever you leave that part though and get back to the murders then the film dials it up once again. That aspect definitely should have been toned down. As for the ending, I can see that one being rather mixed. It’s definitely a pretty bold way to end though and could lead the way for some sequels. After the initial shock value is over though, you may have some questions on exactly how this plays out. I think all of the questions can be answered though as you just realize that everything was a lie. With that knowledge in place, then everything does even out. After all, it just comes down to acting.

Overall, Upgrade has a pretty interesting plot. It’s a classic revenge story with Grey being willing to loosen his morals a great deal in order to secure a decisive victory. That being said, the film goes too far into edgy territory. This film could have absolutely been executed well without going so far over the top. In particular I’m never on board with the main character torturing someone to get what he wants. Grey allowing that to happen at all was definitely a shame. The film has its share of funny scenes as well although for the most part it is quite serious. If you want a film with a better blend of the two genres…then go watch Venom. You can see similarities between the two of them but Venom just handled all of this better.