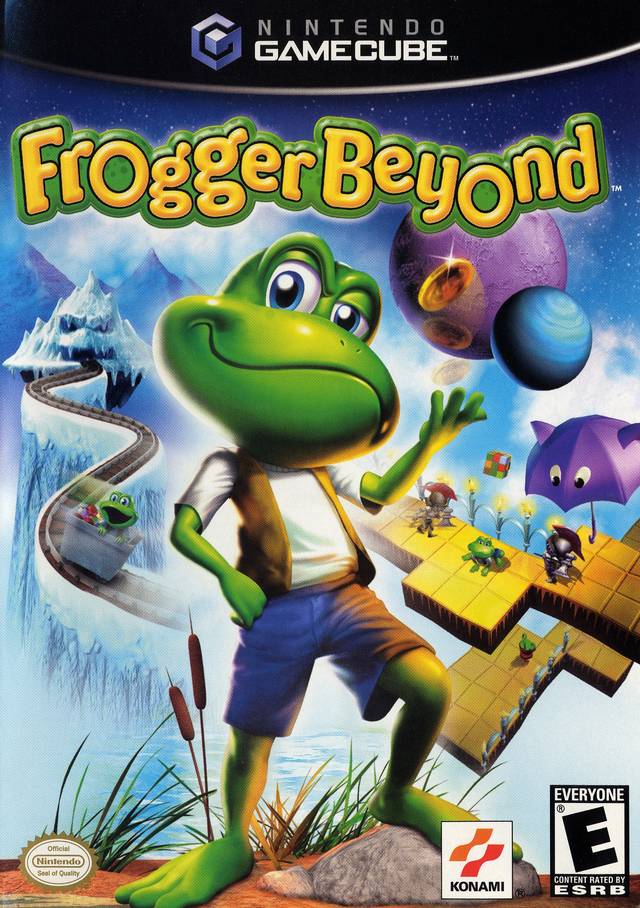 Frogger is one of those franchises where you figure all of the games should be extremely solid. The gameplay is iconic at this point as you hop away from buses and such. It’s a tried and true formula that should always be amazing and yet the games always try to add bonus gameplay modes that just don’t end up feeling right. This game makes that mistake which holds it back from its full potential but in the end I would still say this is a good game.

The story follows Frogger as he has to take a bunch of challenges from the council of elders. Doing this will prove that he is a boy no longer. He will have ascended into being a full fledged man. To do this, he has to travel to volcanos, the future, a jungle, and many other lands as he conquers their bosses. It’s not something he really wants to do, but it’s something that he will do It’s what separates the heroes from the super heroes after all. Frogger will always rise to the occasion…or so we hope.

Most of the gameplay is classic Frogger style. You can move up, left, down, and right in terms of one square per movement. The idea is to get to the goal before an enemy tags you. You can press A to jump 2 squares at once which is helpful for dodging enemies. At that point you’ve effectively got all of the controls at the ready so mainly you just need to make sure that you move strategically. A lot of times you can overthink your movements so it’s important to move with as much speed as possible. If you go fast enough then you really have nothing to fear.

The more you play the better you will get at the gameplay. I do like this style because it relies so heavily on timing and feels very rewarding when you get it right. That being said, lets talk about the bonus gameplay modes because that’s where things get tricky. One of them is where you have to ride a go cart. You can turn to each side or jump over obstacles. The issue here is that the timing is extremely tight and your speed is constantly changing. You would hope that the go cart would always move at the same speed but that just isn’t the case. It’s always being altered which feels a little cheap to me. There’s no reason for the speed to be so variable.

There’s also a snowboarding level which is very similar. Turning is rather dicey there although at least you can jump really high. I would put it above the go kart, but it still feels like an addition that wasn’t needed. The game is at its best when it’s focusing on the core gameplay that is what Frogger is known for. At those points you feel like you’re having a good bit of fun here. Then you have the boss battles which are actually quite tricky. In particular there is a fire boss that was really hard to defeat and took many tries. That one felt like it was partially RNG with how the boss would attack.

Surprisingly there is no final boss in the game which is a shame. Instead it’s just one last big level. Nothing wrong with that of course but it doesn’t feel as grand as you would have expected due to that. I figured things would be a little more grand at the end. A final boss is an unspoken rule in video games after all. Instead the final level just feels like any typical one so it wasn’t all that grand.

The graphics are pretty decent though. The character models are on point and the level designs are good. You feel like you’re right there in the mix at all times. It’s aged well in those respects. The game has no replay value though since when you beat the game there is nothing to do. There are no collectibles in the game, no post game content or any of that. When you beat the game, you have completely conquered it. Not a big deal I suppose, but something worth noting.

As for the soundtrack, it’s okay I suppose. I wouldn’t say there are any tunes you will be jamming to later on or looking up for fun. It’s the kind of soundtrack that will just pass you by which is a fair comparison to the game as well. The story is decent, the levels are fine…what you have here is a fairly average platformer. Perhaps that is why Frogger never broke out the way that Mario and Sonic did. He simply couldn’t keep up with them in a head to head battle…at least for now.

Overall, Frogger Beyond is a decent platformer but one that you probably wouldn’t play over a different title in the genre. Frogger is clearly still trying to find its identity as a platformer. Hopefully it will be able to find this soon. I don’t think it’ll be a very long time until I get the next Frogger title so I look forward to seeing how it stacks up. Ideally it’ll be onwards and upwards for this franchise. At least I’ll give this one credit for having a real story mode too. Next time we probably need an actual villain though just to raise the stakes a tad. Bring back Dark Frogger, now that would be hype.

2 thoughts on “Frogger Beyond Review”