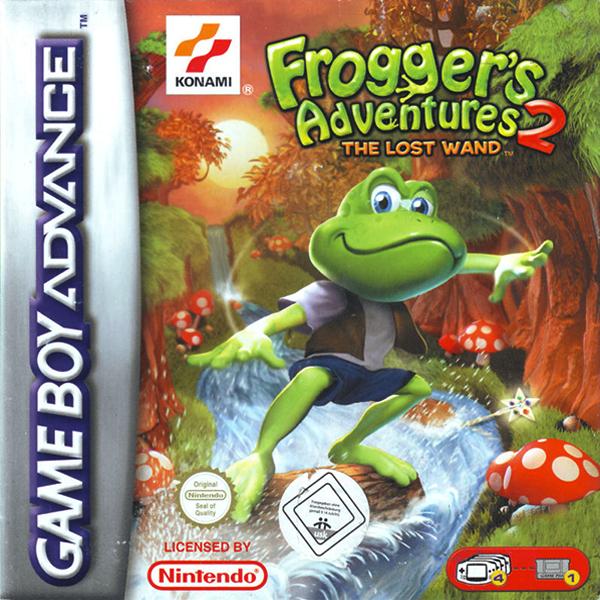 Frogger has returned and it’s time to head back to the GBA era on this one. The core gameplay of Frogger is something that should always be fun. You have to use a lot of tactical awareness to hop from square to square while memorizing enemy patterns. That’s something this game understood a whole lot more than the previous ones. We actually got to focus on this gameplay without throwing in a bunch of unrelated styles and it all worked out rather well.

The game starts with Frogger being called into action once more as someone has broken a legendary wand into 8 pieces. Frogger must now find these pieces before they end up destroying the entire planet. It won’t be easy to stop them but he has the help of a local wizard. Together they will have to go to various planets where the pieces have been absorbed into various life forms and take them down. This will certainly not be easy but it must be done either way.

I’ve already talked about the gameplay but I’ll reiterate that it’s just a lot of fun. The controls are as basic as can be. You can move in any direction by one space or jump which crosses 2 spaces. You have to try and reach the end of the level without being touched. Any contact with an enemy will result in an immediate death but fortunately there are a lot of checkpoints throughout the level so you can use those to regroup. Often times patience is rewarded here so take a minute to memorize the attack patterns without overthinking things.

This keeps the levels fresh without actually messing up the gameplay. Now on the negative side, this game is incredibly short. You’ll probably have it knocked out in around 3 hours or so. Maybe even shorter as I see someone online beat it in an hour and a half. The game isn’t particularly hard but I do suspect some areas should take you more than one try. I definitely died on a fair share of attempts although the game is quite generous with throwing extra lives throughout the game so you will rarely see a game over.

Even the final boss has an infinite amount of one ups next to him so make sure you keep grabbing them to keep your life points up. There are no true collectibles here outside of little cards that are only used in the levels so there is no real replay value here. When you beat the game it will really be over. With that in mind, you don’t want to spend too much on these games. I managed to score each one for a very cheap price since they came in a bundle. When you buy it like that, you won’t mind the length quite as much.

This one’s the definition of a fun game that is over in a flash. It probably would have been a good Blockbuster rental back in the day. As for the graphics, I liked the art style here. It’s got that nice hand drawn feel with some decent illustrations. There’s even a line with voice acting at the beginning and the level designs are good. The soundtrack is a little more on the forgettable side though. The themes are good and all but are about as standard as you can get.

A little replay value could have gone a long way but maybe next time I guess. The character roster in this one’s pretty small. The magician is okay at best but also not too memorable. Frogger is fairly selfish and nervous for a hero but at this point that really is his true personality so I suppose it won’t be leaving anytime soon. He tends to grumble about things a lot but deep down you know he’s in it for the team. Frogger just doesn’t know how to show this. He didn’t deserve that ending though, lets just say that some characters are really not that grateful at all which is a shame considering everything Frogger did here.

Overall, The Lost Wand is a good way to continue the Frogger mythos. It doesn’t get to try anything new and you may not remember it so well by the end of your adventure but it did capture the true essence of Frogger. Finally, you could play the game and just have fun hopping around without having to learn a new set of controls. It may be short, but as of now I would call it the definitive Frogger game. I have another one that I’ll be starting later today though so we’ll see how long this title can keep that crown. If you still have a GBA or DS then I would definitely recommend giving it a go.