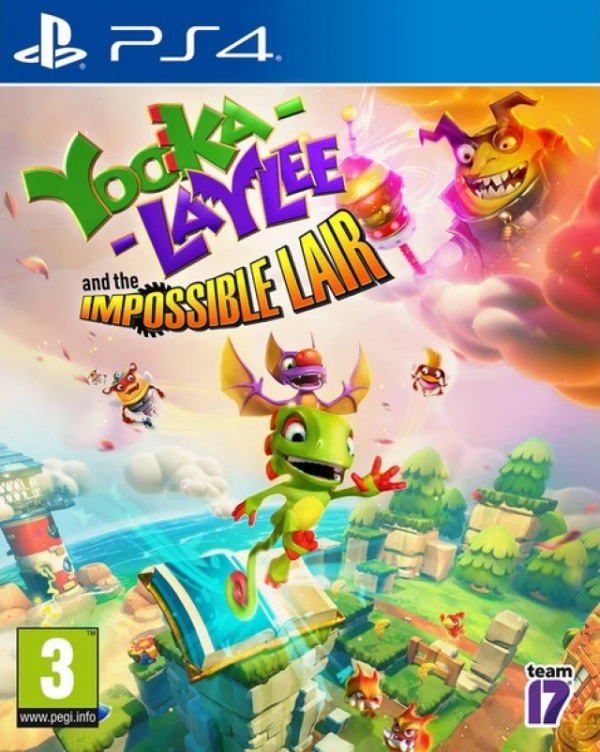 Yooka Laylee may not be a big series yet but you’re always guaranteed to have a good time with the sound effects in each title. At this point it’s just hard to forget them even if the sounds are really just nonsense that’s repeated a lot. It shows what good sound direction can really go for you right? The game is pretty fun and also has a cool concept with the whole lair aspect.

Basically, Chief B is back once more to reign terror on everyone who opposes him. He has defeated the Bee squadron and taken over the whole kingdom. The queen is forced to call in Yooka & Laylee to take this guy down. Everyone knows where his lair is so the heroes can attack right away bus his fortress is guarded extremely well. The queen feels it would be best if we go and find the royal guard members first. There are 48 bee members in the game so you can have a maximum shield of 48 hits. Each bee you save is another hit you can endure so you can see how these guys would be really handy.

The gameplay is that of a 2D platformer. You can use a sort of spin dash to barrel into enemies and also to cross some of the larger chasms. You can spin attack enemies if they get too close or to stay in the air for an extra second. Due to this, you have a whole lot of aerial mobility which is always good. Each level has 5 golden coins which are also helpful since they’re how you take down the various paywalls scattered across the world which hide extra bees and levels behind them. Make sure you grab a lot since you will want to have at least 100/200 of the coins in the game. This will ensure you can max out your shield.

As I mentioned, part of the fun is that you can try to tackle the level without any shields but I can safely say that this is incredibly difficult. The odds of pulling it off are really not in your favor. Even the best of players will not breeze through it, but of course you will get a lot of satisfaction for pulling it off. Surprisingly there is no trophy for doing this so even the developers may have felt that it was too steep a challenge. The level itself is over 20 minutes so it would certainly be rough to lose near the end since there are no checkpoints either.

I did give it a shot but without bees the best I would make it was around 5% into the level. Now that I’ve cleared the game I’m confident I could probably bump that up to at least 10% but beating all of it still does sound pretty impossible. The game throws every kind of obstacle and challenge at you so you’d need to play basically perfect to pull it off. It would truly be one of the most impressive showings that I have ever seen. Number 1 would probably be some kind of speed run but I’m not really sure which one I would choose for that title.

There’s a good amount of content here. The game will certainly last you over 10 hours. There are 20 main levels in the game plus the lair. Each level has a second level you can play by reversing it so effectively there are 40 levels. When you’re not having fun in the stages you can also investigate the hub world to find special items, and extra bees. It’s a very immersive hub world where you are actively reshaping the levels and changing things so that’s pretty cool.

Now, I do think the game is a little too intentionally harsh on finding the items scattered around. There are 69 potions in the game and they can be anywhere on the hub world. By anywhere, I mean you can find some by randomly ground pounding during the level. I think this is a bit much because it takes forever to do that so without a walkthrough or something, you’re probably not going to be able to get all of them. Not unless you want to waste a few hours trying every spot you can think of.

I also wasn’t a huge of how you have to grab so many coins to make it through the paywalls. Mandatory collectibles are still something I’ve never been a fan of. I feel like it defeats the entire purpose of a collectible if you have to locate it no matter what instead of just being able to relax and enjoy the level. You’ll see what a big difference it is to be able to just blast through a level once you have enough coins to clear the game. They finish so much quicker since you don’t have to check out every passageway.

As for the graphics, I would say they look very good here. The character models are solid with the levels being nice and bright. It all pops out at you well enough. I can’t say I particularly remember any of the tracks though so I wouldn’t call them very impressive. They do the job but that’s about it. In general that’s why I would say this is a fairly standard platformer. It’s fun and will last you for a while but there’s probably nothing here that you are really going to take home with you. At the end of the day you’ll just move onto the next adventure.

Overall, The Impossible Lair is a fun platformer that has some good ideas. I really like the idea of being able to challenge the Lair whenever you want. Additionally, the gameplay is solid and the hub world being so interactive was cool. Pro-tip, when using your spin dash you can float on the air for a second which is really helpful for many jumps. It’s basically mandatory in the lair. On the minus side, the forced collectibles certainly got old and the game is practically cheating with how it hides the potions. All in all the game certainly has ways to improve but it will hold your attention. Also make sure you stick around for the stinger leading up to the next game. After playing this you can tell that we absolutely need a third game to complete the trilogy.

2 thoughts on “Yooka Laylee and the Impossible Lair Review”