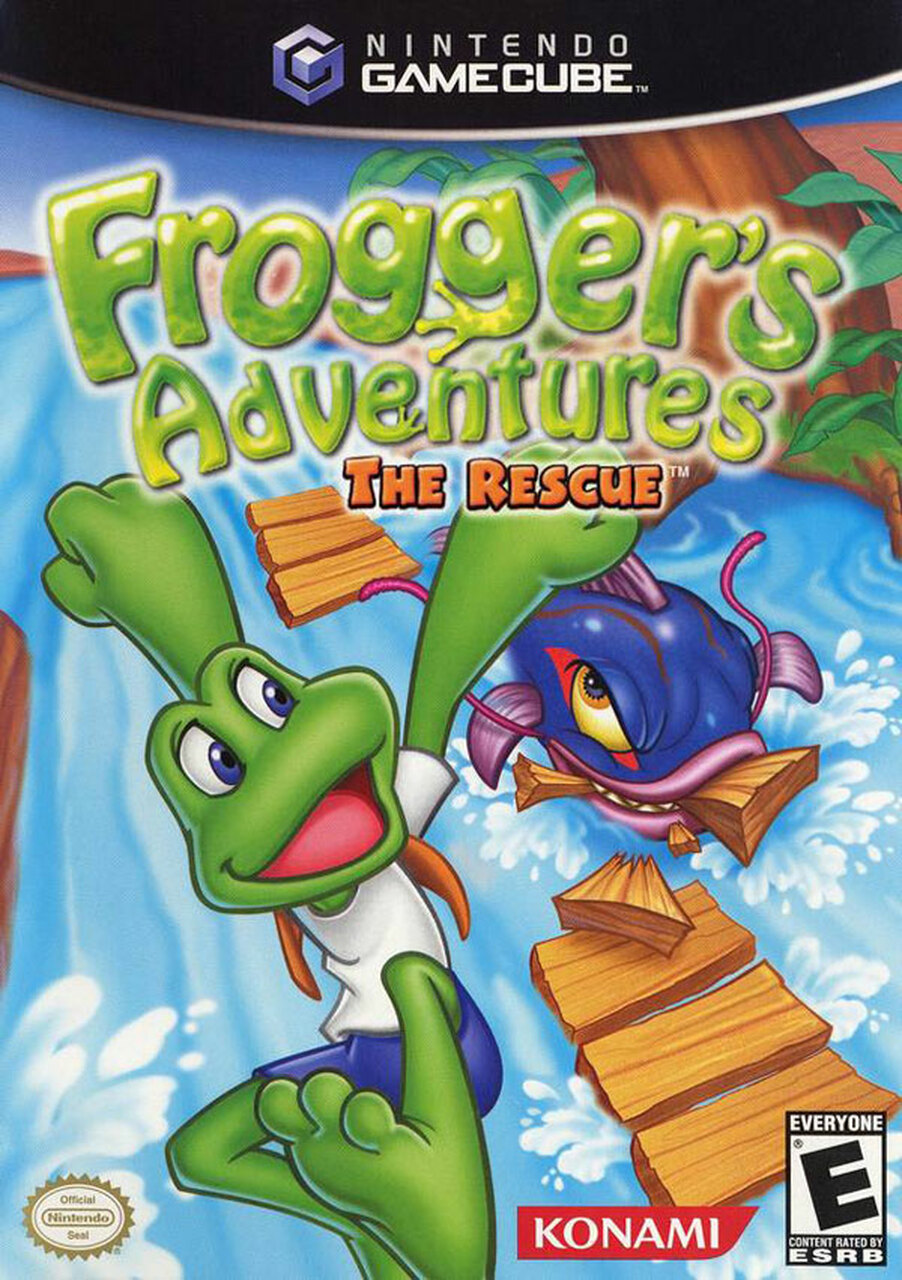 Frogger is back in action for yet another whirl at trying to be the best platformer in town. It’s a pretty solid title and I would say it’s probably the best Frogger yet. There are no gimmicks or anything crazy. It’s really just a solid game of Frogger even if some of the bosses occasionally seem to have a bit of a luck factor going in for them. As always the game does feel incredibly short though. It would be nice if they could bump that up just a bit next time.

The game starts with Frogger relaxing at home when he is suddenly startled by the arrival of a spaceship. The game’s intro really jumps but effectively the villains have kidnapped Frogger’s girlfriend, injured his uncle, and they’re threatening to blow up the world. Only Frogger stands in his way since the rescue team isn’t all that skilled. In fact, they quickly ask for Frogger’s help and essentially please with him to do all of the work. Well, no matter. Frogger is used to doing the heavy lifting and he will do whatever he can to save the world.

At the very least you have to give the game credit for trying to establish Frogger as more of a hero this time around. Usually he’s the more reluctant character type who grumbles about having to save the world the whole time. He doesn’t do it out of justice but out of obligation. Here he’s definitely more all in on being a hero. That said, don’t expect a huge plot either. We have more cutscenes than the average game as there is one after each world but the plot’s pretty direct. Save the girlfriend and stop the enemy.

The gameplay is as you would expect it to be. You can move one space at a time in any direction. Press the A button to go 2 spaces which is useful for jumping over pit falls. The goal of each level is to make it to the end safely. A single hit from any enemy will cause you to lose a stock so make sure you take that into account. This is a game all about dodging so you need quick reflexes. Patience is key here since there is no time limit.

I wouldn’t say the game is particularly hard although at this point this is around the 4th Frogger game I’ve played in a row so I’m pretty used to the gameplay style as it is. The bosses on the other hand will give you some trouble. Part of the problem with these guys is it is very hard to read their movements. Keep in mind that a single touch will cause you to lose your life so there isn’t a whole lot of room for error. They do tend to follow the exact same attack patterns though so if you lose enough times then you will have it memorized. It’s just more fun to win right away of course. Each of the bosses are different and have to be fought in a different way so a good amount of effort was put in here.

In terms of length each world has 3 levels and then a boss arena. There are 7 worlds so you should have this completed in a matter of hours. There isn’t any post game content in single player mode, however this game does have a multiplayer option which will definitely come in handy. That’s something to certainly give this game some staying power so it’s greatly appreciated. Yet another thing this Frogger game has over some of the other ones.

That said, I still think the story mode needs to be longer. Not saying you should drag the game out for more reason, but maybe add in another 2 worlds so we have more levels or something. There’s a lot of fun to be had with this style of gameplay but it’s just over so fast. I’ll give the graphics a thumbs up though. The cutscenes are fun to watch and it gives the story a lot more depth than it would have otherwise.

For example the villain actually looks pretty cool. The girlfriend doesn’t get to do anything though so hopefully she will in the next game. We’ll see if the whole group returns for the next title or if they’ll all fade away as with most Frogger casts. The soundtrack isn’t particularly memorable though, I couldn’t really tell you of any specific tunes that left me nodding my head. It’s mostly going for a lot of free domain kind of themes. The only exception is the final boss theme which is absolutely the Ridley theme just completely ripped and put into this one. It was quite bold.

Overall, Frogger still has more games in the future that I need to check out but it could be a little while before I get there. It was definitely a fun ride though and if you like the concept of Frogger or the franchise in general then you should definitely check this one out. The gameplay’s a lot of fun and it’s why I applaud when the developers don’t just add random gameplay styles for kicks. Make a whole game with this style like Rescue did and then you’re all set. It’s quite fitting that the Gamecube would be the place to check out the definitive game in the series so far. Hopefully the next game is able to keep up the momentum.