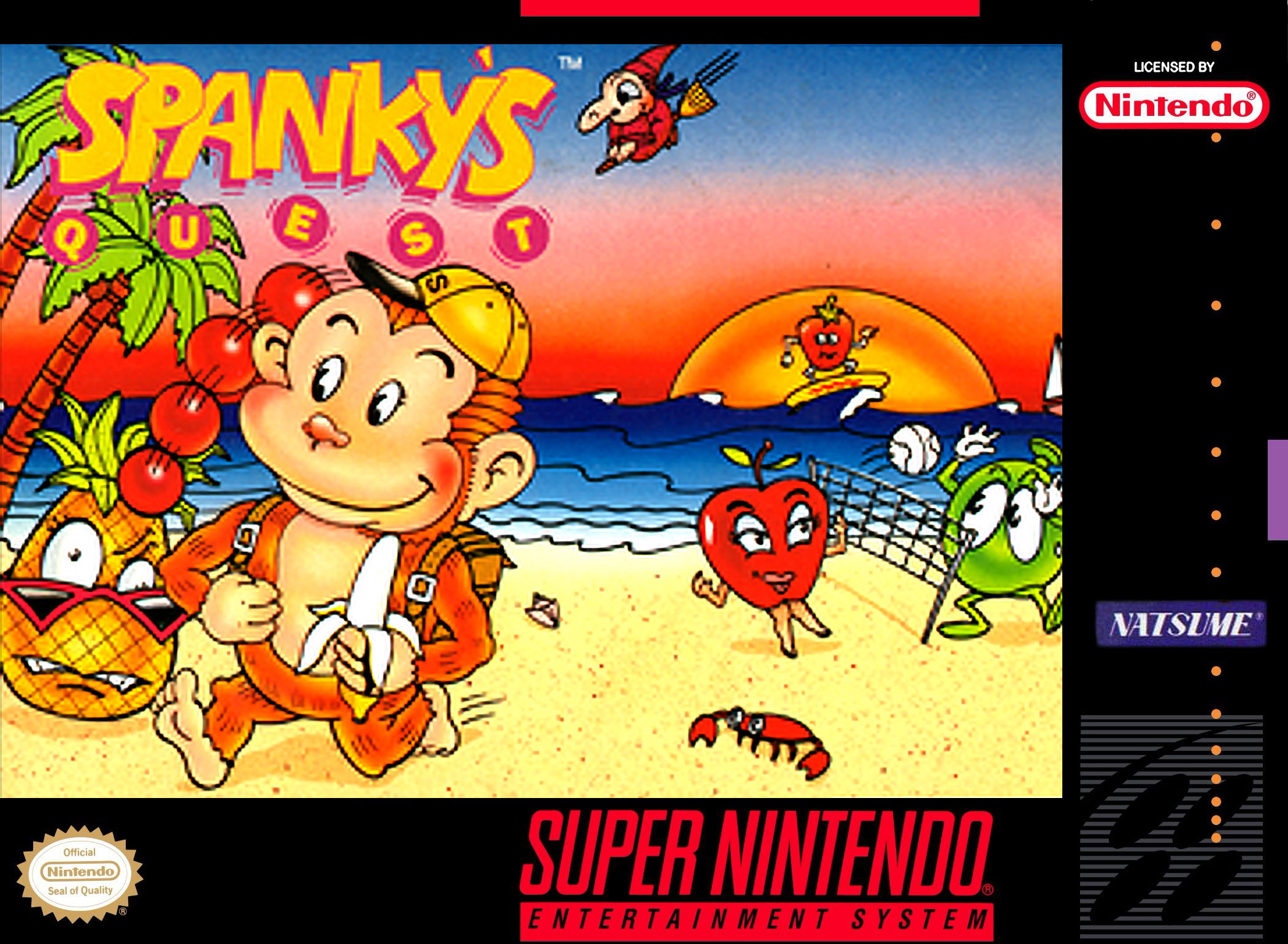 Spanky’s Quest is one of the new SNES games that have finally arrived through the Switch Online. It’s a really solid start to the new wave I must say because it’s actually pretty fun. You go around fighting fruits with a really unique gameplay style. It could have easily ended up being gimmicky in a bad way but instead you can tell that the developers put a lot of heart and passion into the project. When that happens you always know that you are going to be in for a good time.

The plot is more on the interpretive side as the opening cutscene gets really cray but there are 6 monsters that are now ruling the world. Spanky will have to head out and take all of these guys down in order to save his home. Each boss represents a different fruit that must be stopped and they are also protected by a bunch of mini fruits. Spanky isn’t worried though.

The gameplay involves you throwing out little marbles. You throw the marble into the air and then you can press the action button again to break it into a little baseball. If the baseball hits an enemy then that enemy will be defeated so long as you time the explosion to occur on the enemy. If you do this too soon you will only stun them. Additionally you can bounce the ball on your head and it will get bigger. There are 4 stages to the ball and after that you can keep bouncing but it won’t get any bigger.

Level 2 is a Soccer Ball, Level 3 is Volleyballs, and Level 4 are Basketballs. The longer you wait, the more powerful the weapon and it makes sense that Basketballs would hurt more than the others. For bosses I always recommend using the Basketballs but of course it does take longer to charge up than the others so just be careful. Better to land a level 2 than to get hit after all.

Much like in Frogger, a single hit will cause you to lose a life so you want to make sure to stay at a safe distance at all times. As this is on the Switch Online you can rewind as needed though which should take some of the stress out of the equation. You can also jump which is handy when dealing with some enemies. After all, landing the baseball can be difficult so if you miss then you will want to jump out of there.

There are 10 levels in each world and 5 main worlds. After that, you go up against all of the bosses again before facing off with the final boss. I would say the game should last you a little over an hour or close to 2 at most. It’s a fairly decent length for an SNES game and of course since it’s free I can’t complain much about the length. I cut these things a little more slack for old time games but if this was a modern one then I may not be quite so lenient.

The graphics look good and hold up well. It’s an example of why going for a colorful artstyle like this can really work wonders. The fruits have a lot of personality and the stage designs are memorable. I wouldn’t say the soundtrack is exactly top notch but it does fit in with what’s going on screen and has more personality than other games I’ve played. It makes for a pretty complete experience.

There isn’t any real post game content to speak of so the replay value here is basically 0. This is a game where you will be playing to complete the story but won’t really stick around after that. Fortunately the gameplay is very smooth so you will certainly enjoy your main playthrough here. That’s the important part to be sure.

You also aren’t likely to forget this game anytime soon. The gameplay may be a little hard to describe entirely but hopefully you got the gist of it from what I wrote above. It’s just fun to time your throwing so you hit the enemies as you jump your way to the goal. The way to conquer each level is to open the locked door by grabbing keys from various enemies. You get keys either by defeating the enemy holding them or trapping lose keys in a ball and then exploding it.

Strategy is key here since you don’t necessarily have to defeat every enemy. If the enemy isn’t holding a key then you can probably skip him although it could put you in more danger if he is running around a lot. Also, you can’t wait too long in each level or a bird shows up. The bird is completely invincible to all attacks and moves quickly. Touching it for even an instant means instant death so that’s something to consider as well. Keep your guard up or you will surely fall.

Overall, Spanky’s Quest is a fun game. It certainly exceeded my expectations and is a nice way to spend a night. I’d be cool with this series getting a revival someday. If you have the Switch Online service then this is definitely a game you should check out. It sets a high bar for the other new additions so we’ll see if they are able to hold up as well. It won’t be very long until I try those out.