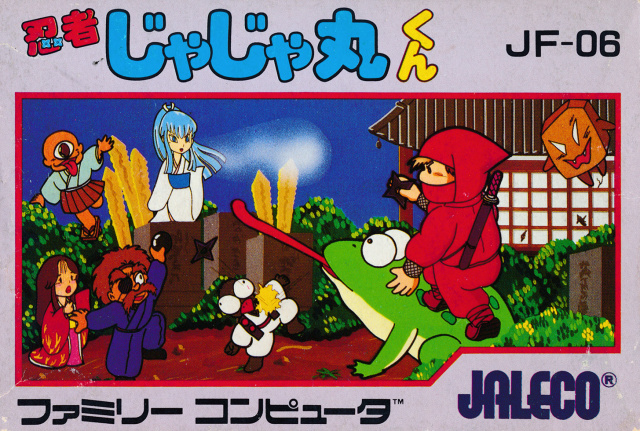 This is one of those games that is quietly very good. It has a bit of a Donkey Kong feel to it as you run through vertical levels as you take the enemy ninjas down. The main villain has the heroine trapped up at the top so when you reach her it becomes your job to take this guy down. The game loops very quickly so it’s pretty short but still makes for a fun little time. The length would be more of an issue if this was a newer game.

The gameplay essentially has 2 controls. You can throw shurikens up or in front of you and you can jump. That’s pretty much it so from there it’s up to you to use your abilities as quickly as you can. It can be difficult to take on some of the enemies straight up so I recommend retreating often. For example you can only shoot one shuriken at a time while most of the enemies can shoot two. So wait until they are nearly off screen and then shoot since they probably won’t be able to react. Additionally you can also jump on most enemies which makes them unable to use their attacks.

Jumping gets more and more useful as you go through the levels to the point where you probably won’t use many other options after a while. Jumping is just the best course of action. At times the villains move so quickly that you can expect to die a lot before you get used to the speed. Fortunately that’s what the rewinding and access points are for. It must have been quite the challenge when it first came out though. Reacting to those guys is really difficult.

The graphics are pretty good. It’s not super detailed or anything but you do see what they are going for here and you always know what is happening. At the end of the day that is definitely the important part. The soundtrack is fairly limited but the main theme is catchy which is really what matters in the end. Ultimately it’s a good package.

With arcade type games like this the most important factor is always making sure that the game is fun and has a lot of replay value. I would say this is achieved here so it gets a positive score in the end. It would be nice to have a little more depth to it but at the end of the day this is effectively an arcade game after all. It’s not like you could add everything to it.

While the game does loop almost immediately it is worth pointing out that new enemies continue to show up until you get to around the 3rd loop. Not saying that’s enough to keep on playing but it’s at least good to know. The enemies continue getting tougher and tougher by the end. There’s even a loose fireball that starts to show up and naturally letting it hit you is fatal so definitely don’t do that. You want to stay one step ahead at all costs.

Overall, This is a solid game that I would recommend if you have the Switch Online service. It really does feel like an alternate version of Donkey Kong which is pretty interesting. The throwing stars makes for a good weapon while keeping in the Mario jumping mechanics. When you have all of those options at your disposal you really can’t go wrong right? I could see there being some potential in a 3D remake of this someday. In the meantime, playing through this title at least once is a good idea.