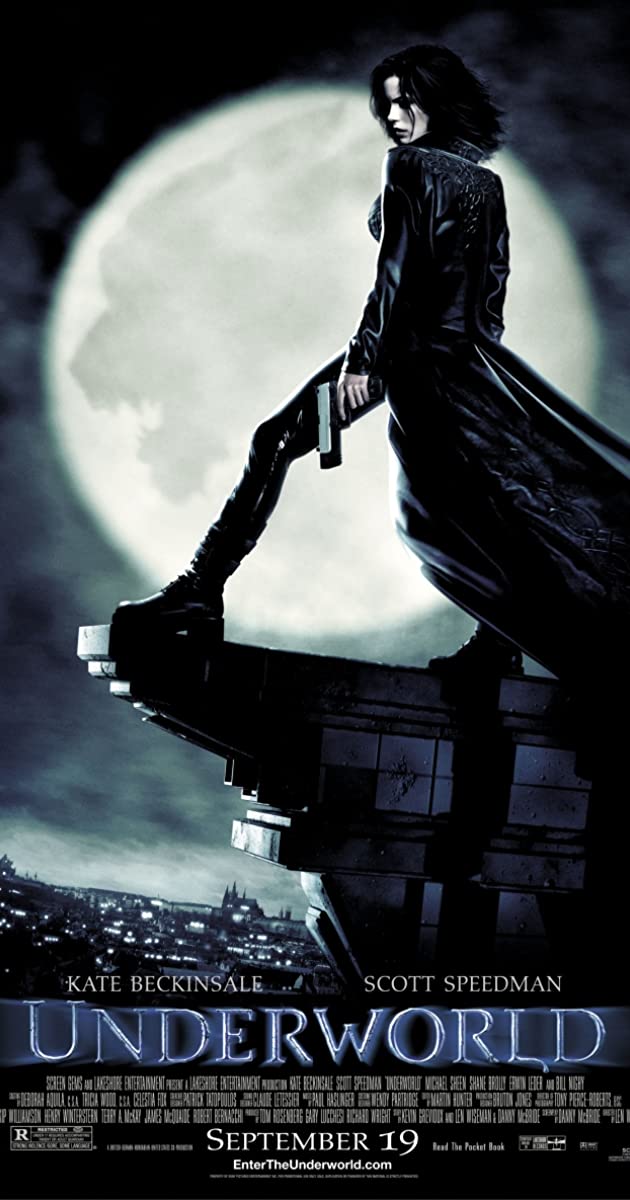 I’ve certainly been aware of the Underworld series for a long time. After all, I saw all of the Resident Evil movies and this has always been its biggest rival. The question is if it could possibly defeat that title. The Resident Evil films typically scored around a 2 so it’s not like that should be a tall order except that vampires tend to be just as bad as zombies if not more so. Ultimately Underworld is about what you would expect and I’d say it’s losing to Resident Evil so far but I am early on in the franchise.

The movie starts with introducing us to the situation on the planet. A war between the Wolves and Vampires has been raging on forever. The vampires have effectively won the war as their numbers greatly overshadow that of the Wolves but they still have to take down the stragglers. The first scene is Selene and a few of the vampire warriors attacking one of the Wolves, but this turns out to be a trap and most of the Vampires are defeated. Selene tells the vampire leader Kraven that they need to take this seriously but he doesn’t care. What can a few Wolves do right?

Meanwhile on the Wolf side, the leader Lucian is planning his big assault to take the Vampires down. His side has been relying on hit and run tactics for a while since they can’t win in a full frontal assault but now he may be able to use a more direct approach. His lead scientist has come up with a special kind of bullet that can destroy a vampire in a single bullet. Mix that in with the vampires’ complacency and now he has a fighting chance. Everything will come down to the human known as Michael. Whichever side obtains him first may end up winning the war as his blood is special.

Selene is the main character here but while you may assume that it means the vampires are the heroes here, the film is quick to remind you that is not the case. Both sides are as corrupt as can be so there are no good guys. Whoever wins, it is still not good for humanity. At least Selene has some sense of justice and duty compared to most but ultimately since she is working for the villains that makes it hard to root for her either. After all, at the end of the day any accomplishments she has will go over to the rest of the group.

As a main character Selene is decently good. I would say she easily beats most of the characters in this film in terms of being likable although since I don’t like most of the characters that may not be saying much. There will likely be a lot of comparisons between her and Alice from Resident Evil as they use similar outfits, weapons, and even their abilities seem similar. They’re both analytical fighters and try to keep up a tough front. Right now Alice is certainly winning in the head to head though as she ultimately doesn’t falter the way Selene doesn’t.

Selene has a scene where she faints after talking tough to Michael which really destroyed her credibility there. Additionally, despite being one of the tough assassins among the vampires, she doesn’t tend to win a lot of fights except against unnamed minions. For example, she was losing against Raze and was unable to take him down in the opening fight. She got a hit on Lucian but was unable to take him out before the guy bit Michael and had to hastily retreat. She was completely no match for Viktor in the end and had to rely on some help.

Now, it’s not as if she is amped up past normal vampire abilities so it makes sense that she wouldn’t be stomping everyone but Alice had a tendency to hit above her weight class. Selene will need to do something similar to move on. All that said, I do like her as a character particularly because of her confidence. She is willing to follow her plans through even if it puts her at odds with the other characters.

Kraven doesn’t make for a good villain though. The guy complains a whole lot and isn’t much of a fighter. He’s only good at sneak attacks and his plans aren’t even that good. Lets say his plan had gone without a hitch, does he really think things would end well for him? The wolves would tear into him at any time. Nothing about his plan made any sense so the guy got real lucky. His obsession with Selene doesn’t help matters either.

Then you have Lucian who does his best to be an interesting villain at least but ultimately the attempt fell apart. The guy just didn’t really stick out and the way he goes down was just sad. Did he not see that coming? His right hand man Raze was a lot more impressive and may have been the best wolf. He looked really good in the opening scene and was really taking down a lot of fighters. He can look back at his achievements proudly.

Michael is the main human here but the guy doesn’t have much of a personality at all. He’s just some guy who gets roped into this and doesn’t really have any feelings about it. The guy is constantly overwhelmed. The romance with him and Selene is also pretty bad, the idea of them getting together so suddenly just doesn’t work and it’s especially a bad idea for him to fall for her. Put it this way, vampires do tend to take prey from time to time and there’s no reason for Michael to assume he would be any different. For all he knew he would just get drained dry so the guy comes off as kind of desperate. Definitely wasn’t a fan of his.

Finally there is Viktor who is one of the Vampire Elders. His strength is immense and it’s easy to see why the vampires had been winning the war with him in charge. This guy is lethal and doesn’t spare any of his opponents. He just goes in and gets the job done without any issues. That’s the kind of guy who commands respect in the end. He’s absolutely twisted and a villain through and through but at least he’s one who can fight.

Ultimately Underworld may have an interesting premise of this war going on but it can’t save the film. I like the idea of introducing two factions and then slowly we see them all converge at the end. It’s good but the massive issues here just tend to come with the genre and style this film is going for. First off, the violence is incredibly over the top. There are a ton of violent moments that will have you shaking your head at how gratuitous they are.

In general that’s part of why Vampire and Werewolf media never really did it for me. Drinking blood and such is just disturbing and the Werewolf bites are always rather graphic. That’s why I was actually on board with both sides using bullets instead. It makes for more stylized fights that don’t tend to be nearly as gritty or violent. If the whole film focused purely on guns then the violence probably would be toned down although it probably wouldn’t matter if they would go in to finish each other off afterwards anyway.

At least the soundtrack is pretty hype though. You’ve got a lot of high intensity beats going on the whole time which helps amp up the battles. The visuals are also on point with the world looking like a normal planet and yet it’s a little extra colorful. The scenery when the heroes are in the town during the opening scene probably had some of the most impressive shots in the film. A rainy backdrop in the city can work quite well when used correctly.

Also aside from the gun fights we did get one true fight in the climax of the film. That was cool since it was like something out of a comic book movie with both characters throwing each other around. This one’s a bit older so you can see how the effects have aged in some instances. Characters sort of float through the air when they’re thrown or hit but it still works well in illustrating that these guys are much more powerful than the average fighter. The whole Speed vs Power match also did a good job of showing how the power could win in the end by tiring out the speedster. Personally I would usually take speed over power but it’s not an absolute.

Overall, The Werewolves seem completely doomed at the moment. They have no senior members that can hope to match up to a Vampire elder and their numbers were already small. I have to assume they have some kind of trump card in order to keep the series going. Otherwise the war will be over as early as the next film. That said, even if the story is interesting, the odds of the series actually working to get better is slim to none. Underworld is content to go for shock value and extra violence over taking the time to construct an excellent story. If you want to check out an interesting story of a war between two sides then you’re better off checking out Captain America: Civil War.