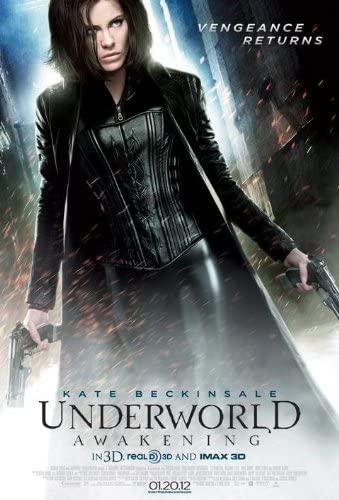 This may be the last Underworld review for a little while but it’s been an intense marathon to be sure. Awakening takes the series in a pretty solid direction as I would say it is the best title in the series so far. Now I suppose this is fairly relative as you’ll notice that there really isn’t much of a change in score.

The movie starts with the government finally deciding to step in. Now this is a plot I had definitely been looking forward to because you know that these guys are going to tip the scales. They don’t disappoint either. We learn that they have immediately wiped out virtually all of the Werewolves and even the Vampires are in hiding with only a small handful of bases left. The humans have won once more as always. They even managed to take down Selene and Michael with incredible ease.

12 years have passed and Selene is freed from her deep slumber. She doesn’t know who has freed her and why but now she wants to find Michael before it’s too late. She goes around slaughtering all the humans in her way but is no closer to finding him. She then meets up with a little girl who seems to have mysterious powers and a vampire named David. Together they will locate Michael but they also have to keep Eve (the little girl) safe as she is being hunted.

There’s a lot of action throughout in this film. After all, Selene is now powered by the elders so her power has grown exponentially. She is effectively on par with the hybrids now which is a pretty good power bump. Then you have the fact that she was already one of the most experienced Death Dealers and the villains need to watch out. The war between the vampires and werewolves is over. At this point everyone is scrambling for survival.

I had a feeling that this would be the best film early on. When Selene broke out of the test tube it was like something out of Resident Evil when Alice remembered everything and started a massacre. That’s pretty much how this plays out and it feels like Selene has the highest body count yet. She is not taking any prisoners at all and it’s nice to finally see her using these abilities well. It’s Selene’s best appearance by a longshot.

Fans of Michael from the first two films likely won’t enjoy that he is written out so quickly though. The guy gets less than a minute of screen time here and doesn’t look great. There’s a scene near the end where you have to question what he’s doing. He really didn’t think this one through. Now there is some extra context in the next film that you may feel retcons things to an extent or if not, it’s at the very least a little implausible how this would have went down.

The new main guy is David and he’s pretty solid. He may not be quite as powerful as Michael but he’s determined and does well at defying his vampire community to help Selene out. Then you have Eve who is pretty powerful. She isn’t quite old enough yet to really be able to know what she’s doing like the others but she does take down her share of enemies. Her berserker stage can definitely hold its own with the other characters.

As you can probably guess the fights are on point here. Any time Selene is beating up on the fighters with her twin gun style or just using some hand to hand it’s pretty impressive. I had a bit of a hard time believing that the super wolf at the end could give her so much trouble though. I guess we needed some tension or it would be too easy though. It did make for a great final fight.

At its core this is why the film exceeded the others. It had the best action easily and I would also say the story was the best even if it’s a lot lighter than the others. In terms of scope and mystery then the first film wins but this one was really a good revenge story about her search for Michael. As I mentioned, the army’s involvement was also pretty solid and I like how easily they were able to end this war. It had been raging for hundreds of years among the the two species but the government ended it in 12.

That’s really impressive. It would have been nice to see a bit more of them since they effectively vanish but I think we’re supposed to know that they still have the edge at this point. The vampires need to lie low for a while and the Lycan have been all but exterminated in the meantime. If anything this would have worked rather well as the final Underworld film even with the loose ends that stuck around.

Of course it wouldn’t be Underworld without incredible amounts of gratuitous violence at all times. The series likes to give the fighters as many gruesome injuries as possible before ultimately blowing them up. Because both species have regenerative abilities it allows the films to really go all out in having them get thrown around. If you would just tone down the violence, blood sucking, and biting then this series could have really ended up being close to top notch.

You could probably stand to fix some of the power levels a bit too. After a while Hybrids don’t seem to special if they can be taken out with one hit and how is Selene being overwhelmed by a giant wolf like that? She should still be able to win with pure skill the whole time. The way she defeated the final opponent was quite clever though so it was nice to add some strategy to the mix.

Overall, Underworld: Awakening feels like it has gone back to the roots of the series. We get a lot of excellent visuals and the city is back in the forefront. We get to see the world’s reaction to the beasts which is cool although it would have been even better if they were thrown in a court room or something. Selene’s investigation into what happened to Michael also makes for a great story beat. We’ll see if the series can continue this one’s momentum. While it may be kept as far away from the top as ever, at this point you’re invested in seeing how it all goes down.