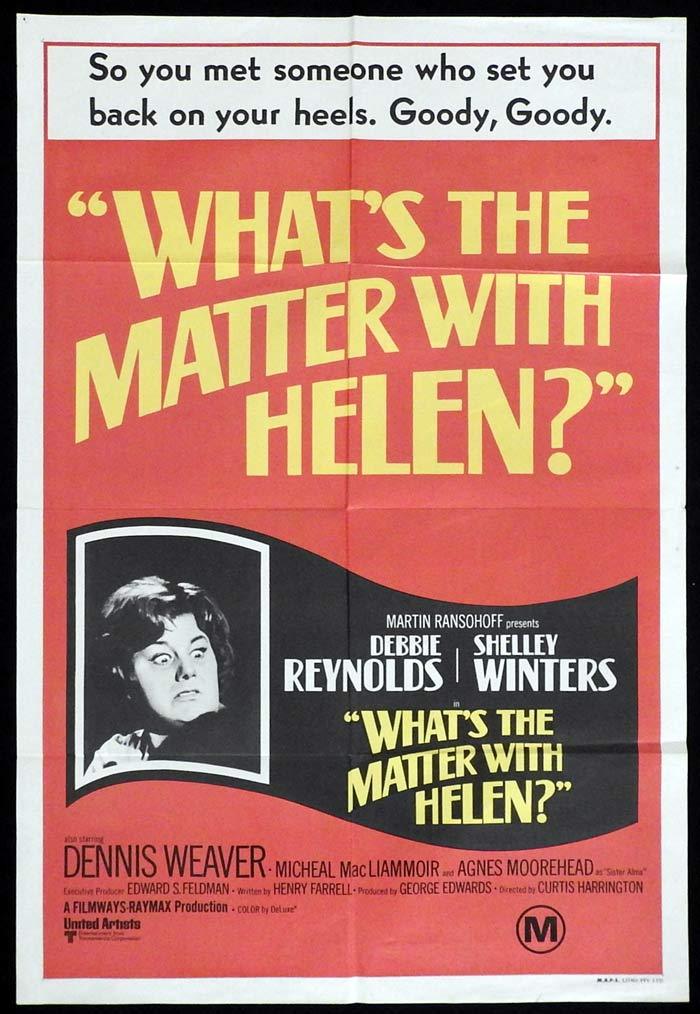 What’s the matter with Helen? Is one of those films where you know from the jump that it’s probably going to be bad. You’re hoping that maybe it’s still decent or something, but the odds aren’t in its favor. It goes for the usual extreme amounts of shock value the whole time and throws in some animal violence for good measure. The film may not be particularly long but you will be shaking your head the whole time without a doubt.

The movie starts with showing us Adelle and Helen who are the mothers of two kids who became murderers. The world is blaming them for not raising the kids properly and so they have to discard their old identities and go into hiding. Unfortunately, someone seems to have followed them. They get calls from a mysterious man who says that he will be murdering them later on. Helen is terrified of this and wants to just stay home in hiding with Adelle. Adelle isn’t taking this as seriously and says they should just move on with their lives. Both of them are rather extreme in their views but Adelle is taking it a little better.

So, Adelle is right in the sense that you should not live your life in fear. I’m totally cool with that but she takes it pretty far when she starts forgetting to close the door behind her. Now that’s just common sense, why would you forget to do that each night? It’s even worse when someone is threatening your life as well as your roommate’s. It’s a lack of common sense on Adelle’s part.

Still, at least Adelle is trying her best to move on. She started her romance with Lincoln rather quickly but that may have been another way of coping. If she married him and they move off somewhere, perhaps she will be truly safe. Towards the end of the movie she is a bit slow on the uptake though. Lets face it, Helen’s been quite unhinged for a while at this point. Adelle continues to turn her back to Helen though even when things don’t seem to be in a good spot. Rule number 1 of any film even if you’re not a horror title…don’t give your back to someone when they are standing right next to a conveniently placed butter knife.

Now for Helen….I’ve got a lot of issues for her. She starts turning crazy very early on in the film to the point where the movie may have tipped its hand a little too early. You’ll be tempted to think that there never was a phone call if Adelle hadn’t heard it. You’ll be considering how Helen could have faked the call or if she hired someone. Neither option makes a lot of sense though so then you have some potential here.

I forget the exact name of the movie, but it might have been the Crow. Basically the plot is that there’s a villain who has decided to rob a bank and next he is going to murder Vincent Price. If you’ve seen any old film you’ll know…you don’t just bump off someone like Price without a fight. What the murderer didn’t count on was the fact that Vincent was also a criminal and he turns the table in an instant. The would be victim has now become the villain himself. I still remember thinking that was a brilliant twist. It’s why Willie’s Wonderland always looked fun in that sense.

There are so many horror films where the villain is just an ordinary person and yet they’re murdering dozens and dozens of people. After a while you hope that there will be a film where this killer runs into the wrong house and has to deal with someone just as crazy. You probably can’t do this plot too often or it would get old but once in a while? Absolutely that’s an excellent twist and a good way to subvert expectations. Now this might seem to be unrelated but here’s what I’m getting at.

The film could have had a really interesting dynamic with the mysterious caller breaking into the house only to find that Helen isn’t some powerless old lady. That would have made for a great confrontation. Instead the film doesn’t go that route and it’s unfortunate. The route we do go through is pretty much exactly what you would expect from the very beginning of the film. Helen gradually goes more and more insane as she consistently raises the body count.

It’s not a cool kind of insane either so she’s not exactly a villain you could root for. No, she’s still crying a lot the whole time and isn’t intimidating in the slightest. She only claims victory against others who were not expecting a battle or animals who couldn’t possibly fight back. It’s not entertaining at all and is just annoying to see everyone go down so easily. The cast is also pretty small so it’s not like supporting characters could save her. Lincoln is probably the only other real character here and he’s just around for the romance. You shouldn’t be trying to romance a teacher the first time you meet so I didn’t have a great first impression on him.

To wrap this up, it’s a very classic horror type film. It gets rather violent as Helen imagines dead bodies in front of her and stabs people quite a lot. There’s a surprising amount of blood in these murders as well. Then you’ve got the animal violence which really comes out of nowhere and is pretty awful. The film doesn’t have any particularly good scenes to bring it back up either. There’s no line of dialogue that impressed me or a sub plot that was interesting. It’s a movie that flops from start to finish.

Overall, What’s the Matter with Helen is a film that I would highly advise staying away from. Just take a look at the poster so you know how the film will end and then you can save yourself the full experience. A slow decline into madness is the kind of plot that may be easy to show in a film but it’s hard to execute well. This one just went through the motions with no real soul and as a result it was doomed to fail.