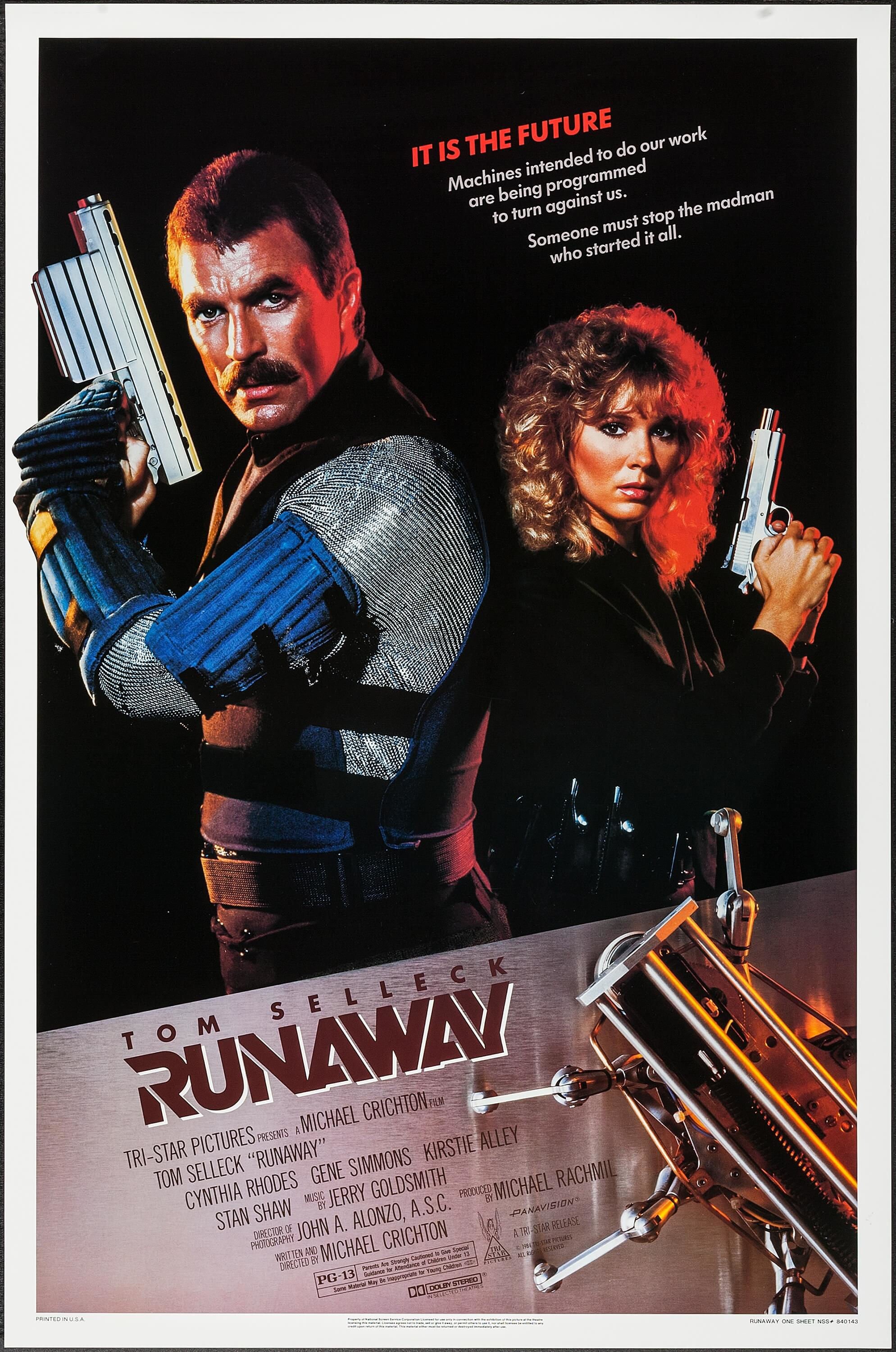 Runaway is definitely a film with a pretty interesting premise. In some ways it’s like Mega Man as robots are now a part of normal every day life and there should be no risk since they can’t hurt humans. As always, that also means that if someone hacks them that’s pretty much game over. The fact that there’s even a task force to handle the “Runaways” (Robots which go berserk) is neat. It’s a universe that has a lot of potential even if the film wasn’t all that good.

The movie starts out with Jack, the best agent in the biz having to take on a new partner. Her name is Karen and she’s eager to do her part in fighting off this robots even as Jack says that nothing exciting ever happens here. Naturally this means that the next mission is about to get explosive. A droid goes crazy in a house so Jack has to take him out before the family is injured. That was a pretty effective opening scene to be honest, the robot was not playing around. It was probably more intense than any other scene in the film. Surprisingly the father of the household doesn’t seem very concerned about his family’s safety with the killer robot and dashes off. He ends up going out like a chump either way though and since he’s in on the upcoming scheme…the whole thing makes him look pretty bad.

Our main villain here is a guy named Luther who has basically found a way to remove the safety features out of the robots. He can now make any robot turn into a “Runaway” that wants to just cause a lot of havoc and destruction wherever it goes. Seems like he is doing this to get rich as there’s a big market for this kind of thing. Can Jack and Karen stop him before it’s too late?

Unfortunately I wouldn’t say that Jack is a great character. One thing that hurt him right off the bat is how he immediately gets distracted by one of the villains. (Jackie) When she shows up he quickly makes a fool out of himself as he tries to show off by beating a robot 1 on 1. He should be trying to be objective since he’s the best agent in the field but you wouldn’t really know it just based on watching this film. He gets quickly overwhelmed in most of his fights and spends a lot of them running away.

He’s scared of heights but that’s fine since it’s a normal fear. The romance in the movie is also on the weak side. Karen spends a lot of the film flirting with Jack but he doesn’t seem to notice and always ends up letting her down. He’s only interested in Jackie but once she is out of the picture he is very open to being with Karen. Seems a lot like this guy just switched sides at the drop of a hat eh? The romance is way too fast as a result.

Meanwhile Karen’s a decent heroine. She tends to stay on target more than Jack. I do think she takes it a little too personally when he invites her over to focus on work instead of the activities she was hoping for. It is reasonable to do some free overtime to make sure you’re ready for what is to come right? Karen does end up contributing a lot throughout the movie so she does well as the heroine.

As for the villains, you have to give Luther credit for coming up with some cool items. His robotic homing bullet was incredibly handy. It can follow you anywhere and moves at incredible speeds. If anything it’s so good that it’s hard to picture the guy losing. He should have kept on using these super bullets but once we approach the climax he doesn’t take full advantage of this. There’s not a whole lot to the villain besides the fact that he’s evil and wants to be rich but he’s decent enough. He won’t leave a grand impression on you but he gets the job done.

Some of the other villains in this film are not very smart at all though. Jackie definitely got herself into quite a few messes when helping this guy out. When you’ve got tech at this level it’s pretty hard to try and get away with lying to the villain. By the time she thinks about escaping it’s already far too late to be honest.

She’s better than the random henchman from near the beginning though. The guy wants Luther to give him a bigger share of the money than they agreed upon. This is already a huge red flag for any villain but Luther throws him a bone. He tells the henchman what a shame it is that another villain and his family were all wiped out. Pretty tragic eh? Luther’s basically hinting that the guy should drop this subject of a raise right now.

Instead the henchman grins and just says that it was terrible. He misses the obvious clue and doubles down on wanting the money right now or else. You can probably guess how the scene ends for him. I’ll never understand why some minions are so bold around the boss. They have a front row seat to how the guy is always murdering everybody so you’d think that they would have a little more tact in these circumstances.

The special effects are pretty solid here. I’d say that they have aged well. The robots look cool and there are some classic gun fights here. The homing bullet still makes for the most impressive looking scenes but the normal fights are decent as well. The film can get a little violent at times with how the machines blow up in people’s faces or with how Luther goes down. Some films really want to make sure you know that the main villain is down for the count. You certainly don’t have to second guess whether that was the case here or not.

What ends up holding this film back is mainly the characters. If you had a more interesting main character than Jack that would help a lot. The future aspect of the story is cool but at the same time you also wouldn’t say that the world appears to be all that futuristic for the most part. You could easily mistake this for the modern day and it wouldn’t really change anything. The film’s writing is also okay but you may not be very engaged here. The movie does have large chunks of time where there isn’t a whole lot happening.

Overall, Runaway has a pretty unique plot. It’s definitely an interesting look at what could happen if robots decide to take over the world as expected. I do think there are a lot of areas where the movie could improve though and add some more energy into the experience. That being said, the movie shows why you would probably need more than a quick task force. You would never be in enough places at once and all it takes is a quick virus chip to cause a lot of them to go haywire. It also seems inevitable that they would start looking into military applications for these bots. The moral of the movie is that you need to stay focused while going after these robots. Ultimately you can probably find a better sci-fi experience than this one though.