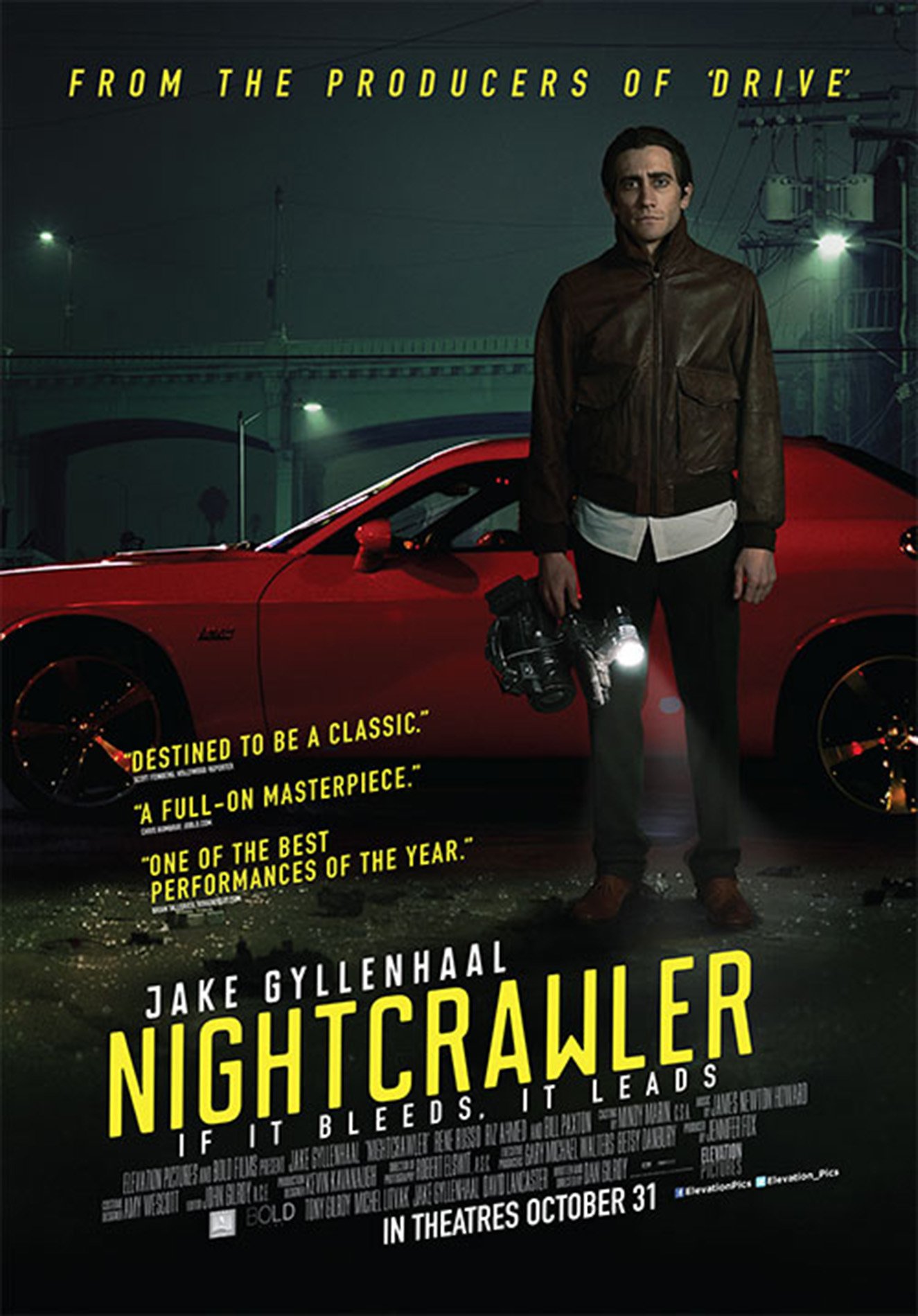 This film is a cautionary tale showing that if you give a shady person an inch they’ll take a mile. A channel producer decides to start skirting the rules and ultimately it doesn’t go over well. You definitely feel like things go very conveniently for the main character that’s for sure. The blackmail part gets annoying because you feel like Lou doesn’t really have nearly as much leverage as he claims but lets dive in here.

The movie starts with Lou sneaking into a warehouse to steal some wires. A security guard tries to stop him but forgets that if someone is trespassing then he’s probably dangerous. The realization hits the guard too late as he’s knocked out and Lou escapes. Still, Lou wants to do something more with his life than all of these little side jobs. One day he comes across an accident and sees “Nightcrawlers” filming the accident and selling it to the channels. He has finally found his calling, Lou wants to do that. Can he become the best accident film recorder there ever was?

Lou’s a very obsessive person and once he has his goal he just latches onto it. Lou always seems to be in the right place at the right time for a big scoop and that’s not luck but his own training. He learns the police codes and buys a portable scanner so he can listen in on their reports. Slowly but surely he grows into being one of the more reliable recorders around and then decides to swing his influence. He wants Nina, the current host of the evening news program and decides to blackmail her. If she doesn’t agree to be with him then he’ll sell the news somewhere else. Meanwhile his partner Rick has to decide if this job is really worth his life.

For me the Nina plot is definitely a miss because I don’t see how she was taken in so quickly. Lou claims that if he leaves then Nina will almost certainly be fired because her ratings are low. Nina shouldn’t have bit on the bait and just let him walked out. She has already been job hopping a lot so what’s one more time? Additionally, if she gives him the high ground now then there is no escaping after this part. By the end Nina seems to genuinely like him or at least the fact that he gives her good ratings which is all she cares about. I definitely found her to be a pretty bad character.

Then you have Lou who is quite deranged and basically one of the big villains here even though he is the main character. Keep in mind that the film opens with him assaulting an officer and he also threatens Rick with violence a few times. Lou is constantly threatening everyone and while he says that he has been practicing to live a more peaceful life, it’s clear that he could snap at any second. He even says that he just doesn’t like people by the end of the film which explains why he acts the way that he does.

It’s not that he’s fearless but Lou is very detached from everything which allows him to get up close with the recordings and to tamper with active crime scenes. You’re hoping that he’ll walk into the wrong crime scene at one point and that will ultimately be what puts him in a tough position. The guy certainly gets away with a whole lot. He talks a good game but that’s really all he’s got since most of the villains here do have guns.

Rick means well and he’s a nice guy but I do have to blame him for not leaving earlier. He knows exactly the kinds of things that Lou is doing by the mid point of the film. Early on you can excuse him because he doesn’t know much about Lou and he desperately needed a job. By the end of the film though? That excuse no longer applies, Rick just goes with it because the money is getting better and he’s lasted this long. Rick just stays in the game too long and when you work for a villain that’s always going to be a big risk.

Then you have the detective Frontieri. She doesn’t get a really big role or anything like that but does turn up near the end for a pair of confrontations with Lou. It’s a tough situation because it’s clear that she’s good at her job but it’s hard to find proof or clues when you’re up against someone as clever as Lou. He knows to hide his tracks rather well and you suspect Rick is here as a patsy if needed.

The film is engaging for a while as you see just how far Lou will go in order to get the scoop. The main issue here is as I mentioned before, it seems like he gets away with way too much because nobody wants to stand up to him. Both Nina and Rick could and should have handled things way differently. Lou would also not have been in a position to do nearly as well without them so suddenly you’re looking at a very different film. The accident to his rival also seemed to come out of nowhere. I thought Lou was going to sabotage him or something but in the end it seems like it really was all just coincidence. Lucky eh?

Since Lou is filming various crimes and such, we do see quite a lot of bloodied bodies and the like as the film goes on. It’s not super graphic like this was a horror film or anything but it is filmed like real events which can make this just as intense. I think the actual footage could have been left off screen or hidden a bit which would have been a good move from the film. I did like how it showed the newscasters just saying whatever the producer wanted them to say though. It shows how effectively they’re given a script and they seamlessly introduce that into their speech. That was probably even the most effective scene in the film because it was really handled well. You could totally picture this being the case in real news reports, particularly volatile ones.

Overall, Nightcrawler is an interesting film and it has the hard job of trying to use the main villain as the main character. It’s tough for that to work for an entire film, particularly if the villain has no sympathetic goal or rationale to at least make you understand why he’s doing this. Lou’s just crazy which doesn’t work so well for the lead. Additionally due to the very nature of the film, you do see some rather graphic crimes. The movie feels like a real newscast which is impressive but at the same time works to its own detriment as well. With more likable characters this film could have gone far but without anyone to really root for aside from the detective who appears once or twice, the film was ultimately doomed.