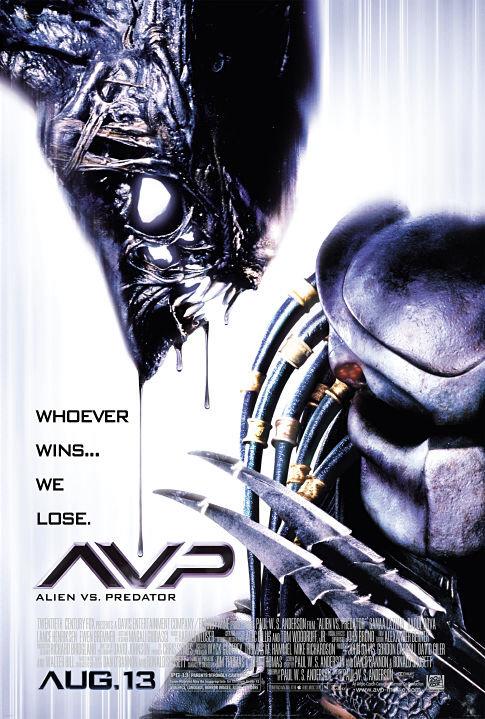 This is a movie I saw many years ago and I remember always being on team Aliens. I’ve always been partial to that group. Perhaps it’s because I’m more familiar with them, that they came first, or it’s just more fun to root for the monster. That hasn’t changed over the years either and after watching the movie I can really explain more why I prefer the aliens. See, while they are sentient, they are really just beasts at the core. They run on instinct and take everyone down. The Predators are actually an advanced alien race that really do whatever they please and tend to look rather corrupt. The whole film only exists because they like to hunt prey and use humans as sacrifices. Not exactly the group you would be rooting for.

Lets take a step back though. The movie starts with Charles locating a mysterious temple. It has details from various cultures and suggests that humanity actually united to create this a while back. He is older at this point and wants one last thing to be remembered by before he dies. So Charles assembles a group of the greatest scientific experts on the planet along with the ultimate guide in Alexa. She is skeptical at first but eventually decides to get on board. Little does this group realize that they won’t be the only sentient life in this area.

One thing that really separates this one from the average Alien and Predator titles is that the movie really leans into the cool sci-fi aesthetics. The scenes showing how the Predators are watching the temple, the alien ship, etc is all so much better than you would expect. This is a Sci-Fi film where you can see how advanced the technology is as opposed to us not seeing more of it. Usually it is fine to keep the Predators more secretive but in a vs film like this, I think this is the right approach.

So the visuals are unmatched and I thought the soundtrack was decent. I won’t say great since I don’t think you’ll even remember a bunch of the tunes by the end but they work well enough during the movie. The writing is good and the fights with the Aliens vs Predators will always raise your hype before they start just trying to get extra gritty.

Where the film falters is where most of these horror films falter. It tends to get excessively violent, particularly with the chest bursters that return from the Alien films. It seems like you can’t go through any alien film without having at least one of these scenes right? If you get rid of those entirely it would be a good move and just stick to the Xenmorphs. This is still a horror film at its core even with all of the in-fighting between groups but you don’t need the bursters for the scare scenes.

As the main character Alexa does well here. She points out that this is a very bad idea but ultimately ends up helping out because if she doesn’t then people will likely die. They may die anyway but at the very least if there weren’t any aliens she would have been able to keep everyone on the straight path. These guys also aren’t exactly the best at following orders so they need a tough commander.

I’m a bit iffy on her teaming up with the Predator so quickly after learning that they used humans as cattle but with the Aliens being mindless I suppose there wasn’t any chance of making peace with them either. Ultimately Alexa kept her wits about her and was fast to react. Alexa even manages to deal some real damage by the end so kudos there.

Charles is not nearly as likable. I get wanting to make a big discovery in the end but then once we find out that he’s sick, it’s a bit much. He’s putting everyone’s lives on the line just for the discovery? The guy’s rich, he could just wait until everyone has actually checked the rooms and made sure it’s safe before walking in. I’d say that would have been a whole lot better.

Maxwell’s his main right hand man and the guy can fight but I didn’t get why he was so antagonistic the whole time. It feels like that kind of comes out of nowhere and of course that never ends well for the humans in these things. It was good to have a gun at the ready though. We’ve got other characters here as well like the lady with a gun, the guy who just wants to go back home to his kids, etc. You’re mainly just wondering if any of these guys will survive aside from the main character or if it’s game over.

As for the battles, like I said I was rooting for the Aliens here. Effectively they are the underdogs as the Predators always plant them in positions where they should lose. When the Predators are on the losing side they just nuke the planet. Seems like they’re sore losers on that front eh? Fortunately for the Aliens they still have the advantage of berserker strength and their continued evolution. The Alien Queen looks really impressive in this movie to be sure.

Before the final battle we get a few skirmishes between the Aliens and Predators with each side taking some wins. Both sides also have a main fighter you could say. One alien in particular handles himself well as he gets up after being slashed and one of the predators takes a few of the aliens out as well. It helps build you up to the climax.

Then of course we do have a twist ending because those are absolutely necessary. Not just in horror but for any film, it’s just that horror tends to do them with the greatest effectiveness. Lets just say that it’s a really effective way to end the film as you understand the implications of this very well. Albeit it, you feel like it could potentially be a plot hole because the scanners should have sensed something. They would have to right? These scanners were shown to be extremely advanced throughout the movie and did notice an alien when it was inside of someone earlier. It should be the same concept but….maybe they got overconfident. I’ll chalk this up as a plot hole but a fairly small one at least.

Overall, Alien vs Predator definitely delivers on the kind of action that you would expect to see from two savage races fighting each other off. I’m also always a big fan of seeing crossovers come out. At the end of the day that makes for a lot of good fun when you get to the inevitable conclusion. It would be nice if it didn’t have to be so graphic though and of course the humans are stuck in the middle as well. If you can get past the violence then there’s definitely a solid film in here but it loses enough points where it ultimately isn’t able to sustain itself in the green. The best complement for the film though is that they really do nail the special effects. It’s the best that the franchise has ever looked.