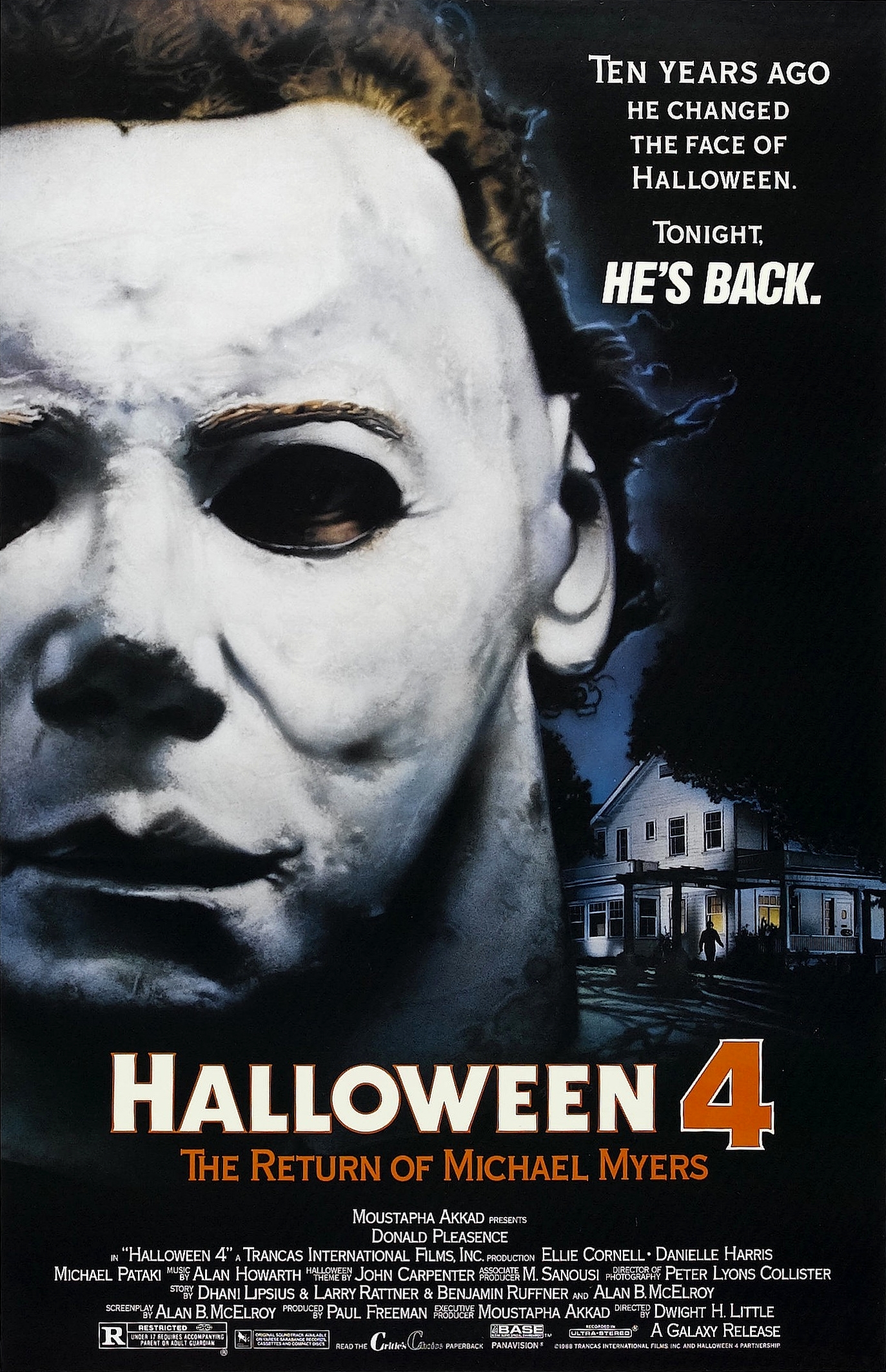 Halloween 3 may have decided to let Myers off the ride but he’s back in business in this film. In a lot of ways Halloween 4 is really just about showing us how dangerous Michael Myers is and that the guy hasn’t lost his touch after 10 years. He certainly wastes no time in taking the heroes for a spin. They just can’t keep up with him in the slightest. There really isn’t anything more to this film than just being a classic slasher though so unless you’re a fan of the genre it’s probably game over.

The film starts off with Myers about to be transferred from his current asylum. It’s been 10 years and his muscles should have completely deteriorated at this point. Just look at how tough it was for Kirito to go through rehab and that was only 3 years. Well, the cops are satisfied that Myers won’t be any trouble and put him in the van. The issue is that in their overconfidence they didn’t really strap him in or keep a close watch so he takes them down for the count and escapes. His target is now his niece Jamie who is still just a little girl. Can the cops and good ole Loomis manage to stop him or is it going to be game over for them?

You definitely have to give Loomis credit for being so persistent over the years. To think that it has been 10 years and he still visits the asylum to check on Myers? That’s not bad and of course the only reason Myers escaped is because nobody took the old guy seriously. You’d think that they would after such a massacre but I guess that wasn’t in the cards. Being complacent is a must in these kind of things. I don’t blame them for doubting the supernatural element of this but you should still have the guy chained up when moving him.

Myers also seems to see Loomis as a rival of sorts given that he goes out of his way to have a few confrontations with the guy. Loomis is lucky that he lives through their encounters although on the other hand it could be that Myers intentionally spares him to ensure that the rivalry goes on. I wouldn’t doubt that this is the case since he usually murders everyone else on sight with no mercy. Loomis is a solid character and one of the most memorable ones in the movie. He may not always win but at least he is doing his best to make sure things go well.

Myers himself is really just a mindless monster at this point. I mean he plans things out and all but there isn’t any personality to him. He’s just a walking murder machine that will stop at nothing to take everyone down. He makes for a tough obstacle to overcome but there really isn’t anything interesting about him. The mask is iconic at least but that’s really all you can say about him. Given some of the horror villains that we do have maybe having one with no personality is better than giving him a bad one. I dunno, maybe that’s the case but it doesn’t make him very interesting.

As for the human characters, well they’re slasher protagonists so you can guess that most of them are not going to be very likable. First you have Rachel who is in charge of looking after Jamie but isn’t very happy about it. I’ll grant you this, at least she doesn’t try to ditch Jamie and sneak off to a party. Once the decision has been made she does stand by it and tries to be supportive. She can be rather petty during serious moments though like when she spills coffee on her rival. Keep in mind that at this point everyone is barricaded in the house since there is a crazy serial killer on the loose. Not the best time to be pulling stunts like this and she could have seriously burned her.

There’s also one scene where Myers is coming up the stairs and she’s just distracting Brady the whole time as she yells and yells for him to run or something. He was telling her to run and she was just staying there. Either you stay and help for real or you run off but you really can’t have it both ways. Once she buys enough time for Myers to finish Brady off then she runs away. It definitely is not her best appearance.

It’s not a great look for Brady either. I don’t care if she started playing the drums in the background, he is face to face with a dangerous criminal who has already murdered many people. He should have had complete focus here as he loaded the gun. Instead he allows Myers to get within an arm’s distance of him which is a massive mistake on all fronts. You just can’t allow that to happen under any circumstances.

The Sheriff was solid though. He did a good enough job of looking after the community and did take Myers seriously by the end. (Not like he had much of a choice if we’re being perfectly honest here) He really did want to do right by his town and there wasn’t really anything to dislike about him. Then you have Jamie herself who doesn’t get a lot to do here. She’s just old enough where she can run and at least knows what is going on but is ultimately too young to actually fight back or really plan things out with the adults. That really makes her a character who has to be protected at all times but also one who can’t really fight back.

I wasn’t a big fan. She’s not too bad or anything and means well but just isn’t very interesting as the protagonist. Most of the jump scares here are really because Myers is toying with her since he knows he can win at any time. He’ll just jump out and do the equivalent of yelling “Boo!” and then vanish away when the grown ups appear. He could probably beat them as well especially since his durability is so high but I suppose he wants to draw the whole thing out.

The main thing I’ll give the film credit for is when we get a group of guys from town who decide to hunt Myers down themselves. That makes a lot of sense. It’s rare to ever see the town fighting back while everything is going on, they usually just stay home and get bumped off one by one.

Unfortunately the execution isn’t great as they end up just picking each other at one point and panic too easily. The idea was a good one though, if there’s ever a time to be a vigilante, it’s when there is a serial killer on the loose. By this point he had also taken out the police station so something had to be done. The scene where Myers inevitably takes them out is more annoying than anything because it just doesn’t make sense.

There’s not much else too it as the rest if just Myers murdering everybody. He certainly wants to make sure that nobody ever wants to move to this town again. Or at the very least, just take a vacation around Halloween so you’re not around when things get messy. The crazy thing is that Myers may not have even known who to target if not for the cops happening to mention Jamie’s name at the wrong time.

Overall, Halloween 4 is very much just going through the motions at this point. As soon as you see Myers being transported you can probably just close your eyes and still follow what’s happening in the movie very well. There’s just no escape from this guy and the whole movie is about him tracking everyone down. It’s as violent as you’d expect and the cast isn’t the best. You also feel like they should easily be crushing Myers in many cases if they weren’t all panicking the whole time. I will give the film credit for having the town actually fight back for a change. Now that’s rare to see.