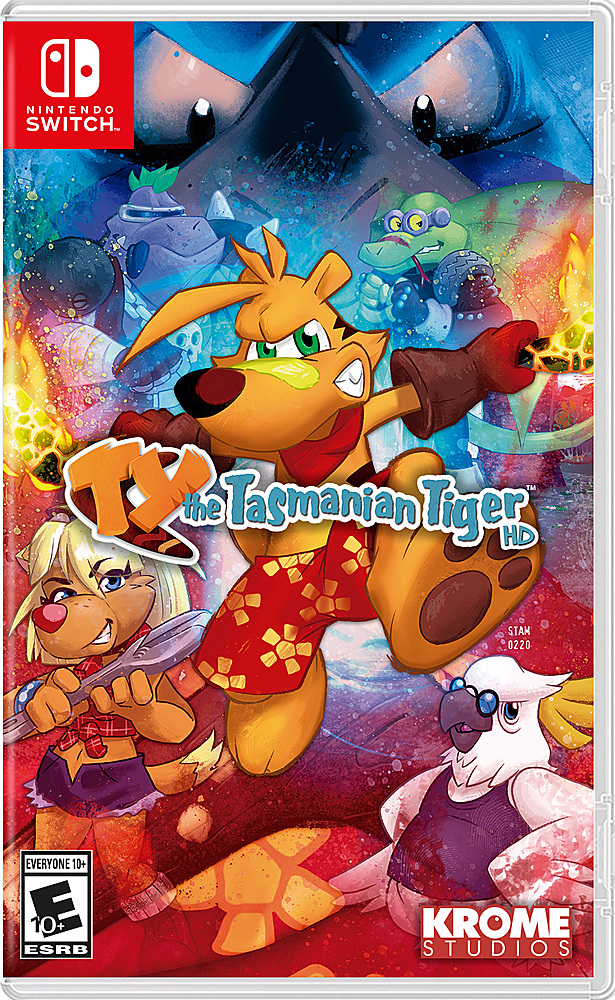 Remasters are a fun way to bring along hype titles from the past. Ty is one of those platformer series that got a little overshadowed by the other big shots like Mario back in the day but he had a full trilogy to himself. That’s definitely impressive and after playing through the game I can say it holds its own. It’s a good all around title that you should have fun with.

The game starts with Ty finding out that the rest of the Tasmanian Tigers were taken down by an evil bird a long time ago. This includes his parents so Ty is all alone in the world now. To try and survive, Ty must gather all of the relics. This will prevent the bird from taking over the world and will also have the added benefit of bringing all of the tigers back into the world. These relics are all in dangerous places though so Ty must keep his wits about him or he will be doomed. So begins the most dangerous adventure of Ty’s career.

The gameplay is your standard 3D adventure. You run and jump across and through obstacles to get to the goal. Each level has the main objective which is to get to the end and then 7+ other missions inside. Each level has a few missions that will be the same across the game like getting all collectibles in a level and others will vary with requests from characters inside. The game is part collectathon so you will want to complete most side missions before going to the next level. This will ensure you don’t get stuck by not having enough Thunder Eggs (You get 1 egg per mission) and have to go back to replay the level. It’s worth noting that each world has a Thunder egg requirement to get to the next world and it doesn’t roll over. So if you need another egg to unlock world 3, don’t bother going back to world 1 to get an extra egg as it won’t count. It must be from word 2.

By and large the requirements for unlocking new worlds are not very large. You should be able to easily beat enough sub missions per level where you don’t have to go back and do any replays. What helps is that you can see the total needed to unlock the next world as soon as you enter it. That’s certainly handy. I’m not a fan of collectathons in general as I think that should never be required for the story. Make that a post game challenge and then everyone’s happy. That said, the game at least makes this one not as punishing once you know that it’s coming so I’ll give the game some credit there. It’s not ideal but I’ll manage.

Now I should mention the biggest unique gameplay element to Ty, which is your boomerang. It’s your main method of attack as well as activating buttons throughout the levels. You fire it off and the boomerang comes back to you. You can also use it to glide which is very handy. The controls are basic so you should be able to master this quickly. Some of the jumps require really good precision so expect to fall a few times but usually there is solid ground under the tougher jumps so you don’t have to worry about dying. As you go through the game you will unlock more powerful boomerangs like the fire and ice ones which are very handy. It’s a fun gameplay style and boomerangs make for a good weapon. The combat is also fun and doesn’t get old.

As for the story itself, Ty gets props for having full cinematic cutscenes here. You’re not going to get any of that plain text box stuff. The Bird is a decent villain and while you might have a hard time remembering some of the names pretty quickly, you will at least remember the designs. It’s a rather standard platformer plot but the cutscenes help take it up a notch. The battle with Ty’s ancestors and the bird’s mech was a really good one after all. Ancestors may be misleading since it seems really recent but it was a lot of tigers at the very least. We get a dark Ty which was a very interesting concept but while I was expecting someone like Shadow the Hedgehog, this guy turned out to not be on that level. The most surprising thing about Sly (Dark Ty) is that he doesn’t even seem to be a match physically which is really rare. Usually the shadow version is at least equal or a bit stronger but Ty takes this guy out whenever they meet with ease. I suppose it works as a twist but you end up feeling a bit bad for Sly if anything because he lost all of his mystique. I’m rooting for the guy to do better but from this game I don’t think he would be getting a lot of fans.

The graphics are solid. The colors all stand out and I like the level designs. Ty always looks like he is really upset or scowling due to where his mouth is but it makes for some amusing moments. The soundtrack is a little more in the forgettable side, I can’t really remember any tracks in particular which isn’t really a good thing. I do think it worked well enough while in the game though so while it isn’t remarkable, it isn’t bad either.

The game length is fairly decent at 5-7 hours. I’d consider that the standard platformer length at least. There is a good amount of replay value with the collectibles and gathering all of the boomerangs. That should take you a decent amount of time. You should also be able to get Ty for a good price so it all balances out. If you want an extra challenge on top of everything, try to beat all non bosses with just the normal boomerang and bite attacks. That said, I did that for most of the game anyway since the other boomerangs don’t have a huge boost in attacks I’ll or anything like that.

Overall, Ty The Tasmanian Tiger is a solid game. It’s certainly a nostalgic kind of platformer that looks and feels like the ones you would have played back in the day. It’s got a nice plot with decent characters and strong gameplay. Those are all the fundamentals you need to have a good experience and so Ty pulls that off. This remaster brought a code for the second game so you can bet I’ll have a review up for that one shortly as well. You can never have too many adventures with Ty after all. If you haven’t played this game yet then I would definitely recommend picking this game up. It’s the kind of game that’s really accessible to anyone and so I would recommend it to any gamer.