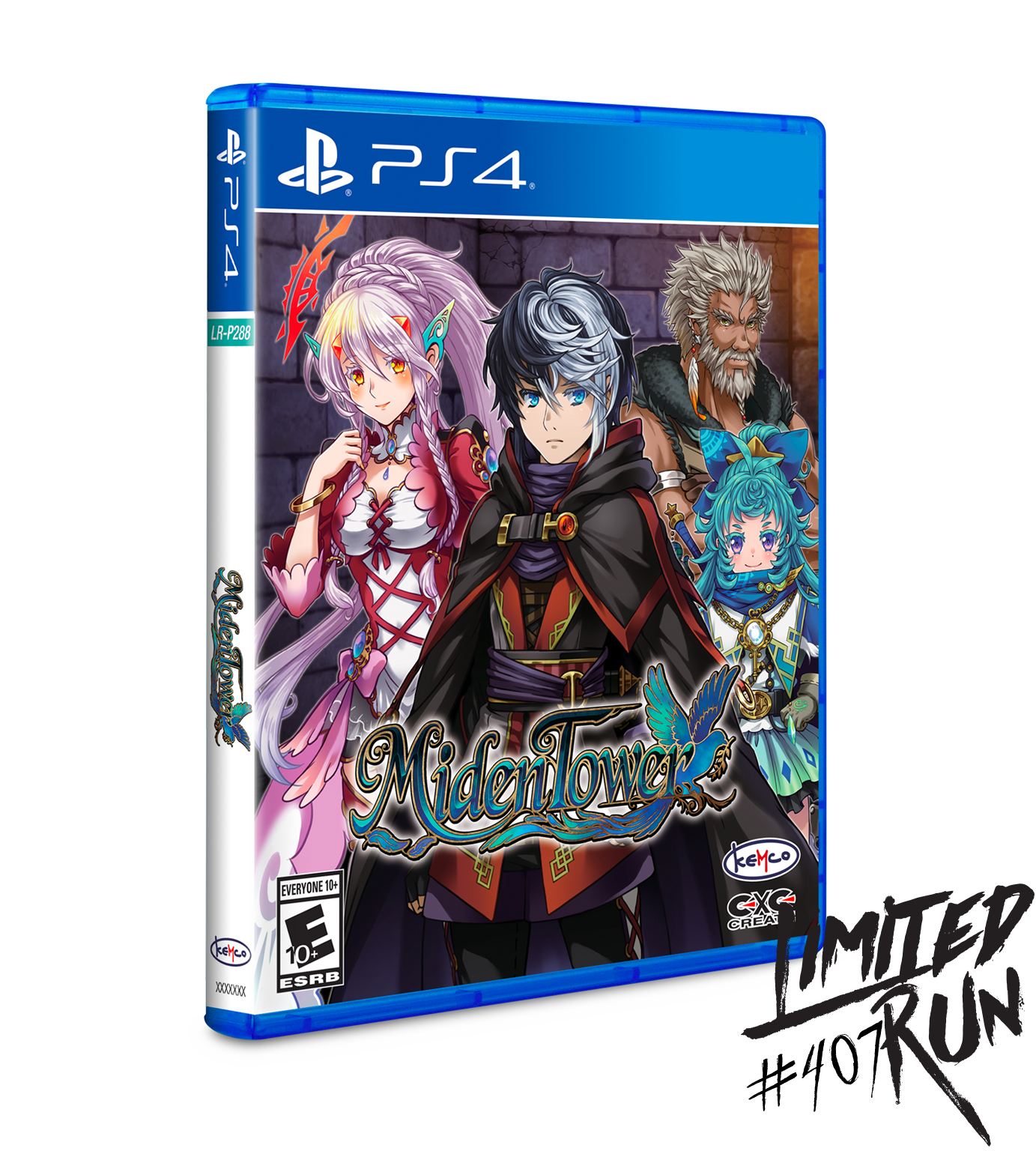 Miden is the latest Kemco game and goes back to the roots of their original rpgs. It has all of the solid gameplay customizations at the ready like skipping battles you don’t need and things like that. I’ll go into it more later but mix that in with one of the best plots I’ve seen in a while and you definitely have a winner here. This is one of those games that would be nice to see a sequel for.

The story starts with a village being burned to the ground as most of these RPGs seem to start off with. The government in this game appears to be on the evil side as they slaughter everyone and so the last remnants of humanity quickly build a tower and hide in there. Using teleportation technology and magic to prevent people from warping in, the people have lived in peace for a while now. Well, one day the villains start appearing in the tower. Peace is no longer a guarantee and so the heroes must find the villains and the source of their entrance to put a stop to this.

We then cut to our main character who is quite unique. Valen had to personally watch his friends and family get destroyed, he has sworn revenge on the army. Every day he heads out to destroy a bunch of them and head home. His entire motivation and reason for existing is revenge which is definitely not healthy. One day he bites off more than he can chew and comes near death only to be saved when he summons a sentient wall to save him. Her name is Leila and she is different from most magic creatures in this land. See, most of them have to listen to the summoner at all times and don’t have creative thoughts or the ability to resist. None of that applies to Leila though. She has control of her own and makes her own choices. Still, she does want to protect Valen even if she does not agree with his whole quest for revenge. She aims to get him to mellow out by the end of all this.

The graphics are classic Kemco from start to finish. You have a lot of bright character designs and different level designs. They all appear very familiar so I wouldn’t be surprised if they are starting to reuse assets from previous games. I can’t really blame them if that is the case though since it’s efficient and ultimately it doesn’t affect the story. As long as the story is good that’s the important thing and the graphics are solid either way.

As for the soundtrack it’s nothing all that special but the tunes are always fun. These games always have a very specific style to them where you can recognize the music immediately. That’s the case with this game as well so you feel rather pumped to be starting on the adventure. The soundtrack isn’t large but we do get a new theme for the final boss which was nice. All in all the game succeeds massively on the technical side as expected.

As for the gameplay, there isn’t a lot to explain here. It’s your classic turn based RPG. You attack with physical blows, magic, or special skills. You keep on fighting until you take the opponents down. On the hub world you run around until you get to the very end. You also have a pot where you can throw ingredients in to get other items from time to time. There are several trophies for making a lot of items so I recommend always having a bunch cooking at the same time since it helps a lot for later on. Ultimately you’re doing this more for the trophies than for its effects.

Now I mentioned the gameplay customization before. So here’s how it goes, first off you can turn off battle effects. When you have to level grind, it can feel a bit long to see the attacks over and over again in each battle. When you turn the effects off, you just see a flash for every attack but they keep on attacking. That saves a lot of time right off the bat. Then you can also increase the speed of combat from X1 all the way to X3. That makes a difference too. Following up on that, you can turn off battles against enemies that are weaker than you. You know how in most RPGs you have to keep getting encounters with level 1 monsters and beating them is only a formality since the victor is never in doubt? You don’t have to worry about those here.

These are gameplay improvements I’d like to see more games pull off but Kemco seems like the only ones who have done this to date. It’s why I consider them as masters of the RPG genre. There are also orbs in each area that you can activate after beating it to stop encounters all together. Need to back track for treasure chests? Well at least you won’t have monsters jumping out at you all the time. Considering that one trophy is for walking 50,000 steps, I thought this was a very considerate option of the game since it at least makes this feat rather painless. Otherwise that would just take forever. Even now that is one of the only trophies left that I haven’t obtained for that reason.

Then what really helped the game get to the next level for me was the solid story. Lately some of the Kemco games have had more down to Earth stories with slightly smaller stakes. Well, this one goes back to being a grand story. The character development for Valen is good as he goes from only wanting revenge to being more of a reasonable guy. It’s an effective character arc. Now some scenes can be a bit cheesy with him but at the end of the day he does his best. The origin is also quite sad so you can see how he became so revenge driven.

Leila is also a good character and I thought she handled the situation well. She didn’t suddenly jump in and tell Valen to start saving everyone but gradually got him to escape from the cycle of violence. It’s very Naruto style with how the characters point out that murdering people will just continue the cycle. Ultimately this allows Valen to be the bigger man here and look the other way when it comes time to make a choice.

As for length, the game is a bit on the shorter side. I would definitely say it is one of Kemco’s shorter titles as you should blast right through it. There isn’t much of a post game as you should have that beaten in about an hour or so. Granted, it went by so fast in part because I grinded my character levels to over 500 so I was able to beat most opponents in an instant. The secret ending is good though and way more satisfying than the normal one. That wouldn’t have been a great way to end the adventure. The platinum trophy is quite easy to get so I recommend trying to give it a go.

Overall, Miden Tower is definitely a very solid game. I think it’s the closest we’ve gotten to a game on the Asdivine Hearts series. That is still my all time favorite from Kemco but this would certainly be in second. It’s just got a great story and of course a lot of amazing video game mechanics. Kemco certainly brought out the A team here and I look forward to seeing which adventure they churn out next. If you don’t have this game yet, I’d recommend purchasing it asap!