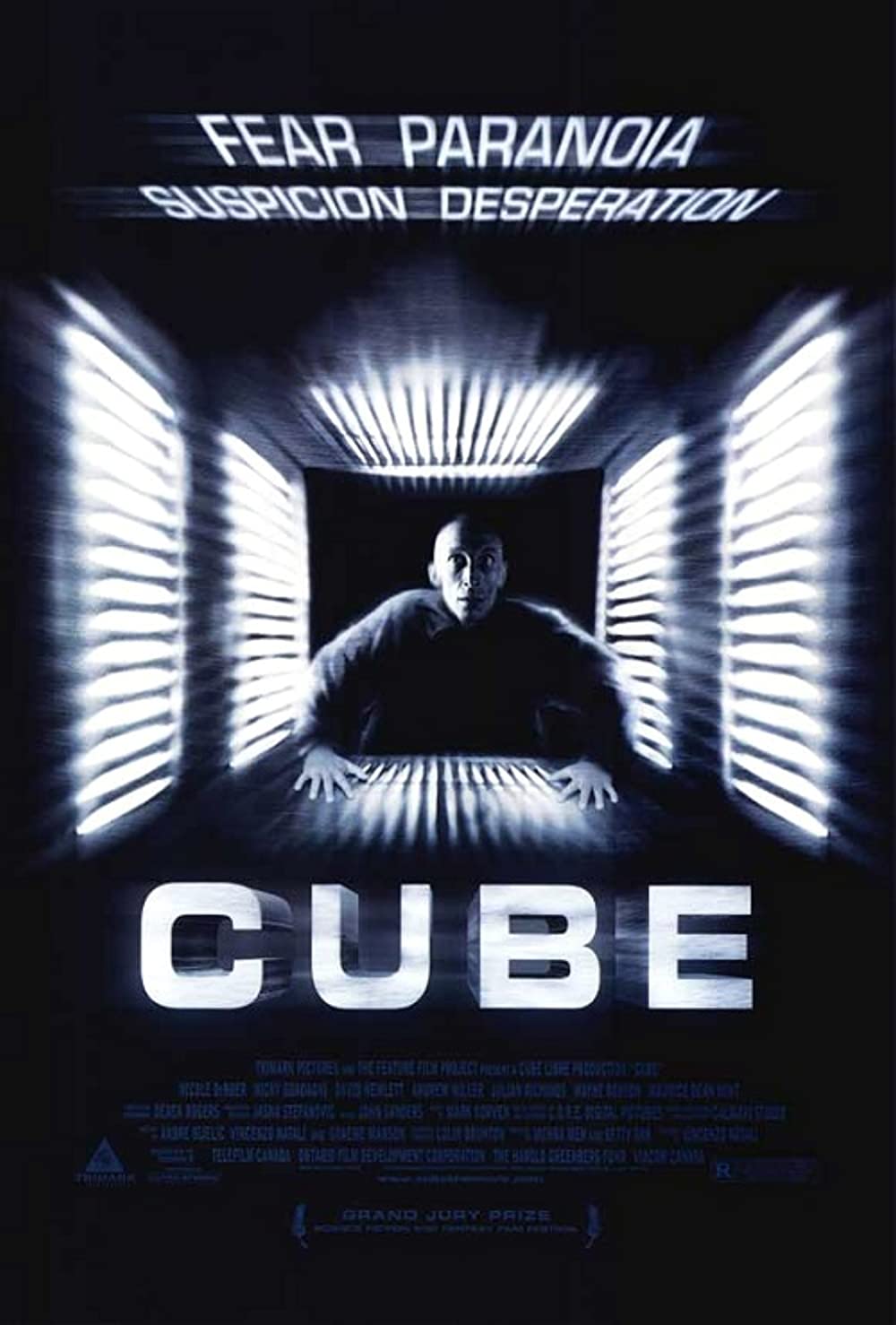 Time for one of those death trap films where you have to survive until the end to win. Of course it won’t be very easy and if you know your genre well then it’s unlikely that more than 2 will survive. In fact, sometimes you can’t even expect 2 to make it. So as you watch the film you will be wondering just when these guys are gonna die. Unfortunately the film is pretty bad and doesn’t end up using the concept to its full potential.

The movie starts with all of the characters waking up in a mysterious Cube. Each room is lit up by the same 4-5 colors and it’s easy to get lost. The place seems to be endless as well which causes the characters to start cracking. Making matters even worse is the fact that many rooms have death traps installed within them. Can the heroes really find a way out of here or is it game over for them?

A movie like this is usually doomed as soon as you see the cast since the characters tend to be unlikable and this one is no exception. The characters always end up being either mean, evil, or complain a lot. They’re not ready for this kind of adventure and it’s why you always wish they would do a film with a group of trained professionals instead. For once it would be nice to see the characters not be panicking the whole time and actually just make the right calls when it counted. This isn’t that film though.

First you have Quentin who’s the worst character in the film. You know how his character arc is going to play out almost as soon as he starts talking. Maybe it’s an escape room type gimmick but you know that you’ve seen this character arc play out before. It’s a shame since the drama should really be focused on the literal death traps instead. Quentin’s scenes just get worse and worse as he film goes on which is a shame since it just drives the film lower and lower.

Granted, the film was always going to be a really low one. It’s a pretty violent film with the death traps everywhere and each death is always rather gruesome. One guy gets his face melted off, others are stabbed. There aren’t really any happy moments in the film. Since the characters started off already in the cube, we don’t even get a happy intro with the characters talking as they walked in an area for a test or something. The film is part mystery as they don’t even know why they are in the Cube in the first place.

Joan is effectively the main character here. She’s a math genius which really comes in handy here due to how the Cube works. The film throws a lot of twists about this but the key thing to remember is that as a trap/puzzle there is a right way to move around. If you find this method then you will end up going far and claiming victory. Of course it isn’t easy though. Joan definitely goes through quite a lot in the film. I wasn’t particularly a fan of hers either though. She complains a lot with the rest of the group and isn’t particularly nice to Kazan.

Nobody is safe from cracking in this film. Kazan is one of the biggest examples as the whole experience basically broke him completely. Unfortunately you feel like he’s just here to make everything more uncomfortable for the rest of the characters. One of the worst scenes is when he has to use the bathroom and it’s crude moments like that which will hold the film back even more. You don’t need anything like that in this film or any other.

David is the cynic of the group who thinks everyone is dead anyway so we may as well not try further. He is hiding some secrets which strengthen his case on why they shouldn’t do much but of course that’s not very helpful in trying to stay alive. He’s really not being helpful to the cast at all. Someone like this is just really annoying to have in the group spreading more negativity.

Helen also can’t stay focused as she talks about the government conspiracies and how someone is always watching. Her theories only serve to aggravate the rest of the characters even more. She seems nicer than most of the other characters at least even if she breaks down a lot. The only character who seemed likable was Wren. He wasn’t panicking and was at least making some moves in trying to get out of here. I can at least respect that.

But yeah this is the kind of film that’s just very mean spirited the whole time. It’s about throwing the cast into an unwinnable situation as you watch them all get bumped off and turn on each other. If the film had stayed about survival and didn’t go down the “Lord of the Flies” route then it would have been better. Likely not good of course but at least it would have been better. The death traps are all you need and everyone turning on each other is always one of the worst plot points.

In fighting is bad enough but the films always have to go way too far with it. If everyone was just upset at each other or snapping with insults that would be fine. It’s when they try to murder each other or go further that we have a problem. That’s most of the second half unfortunately because the characters figure out how to get around the traps reasonably early on and so after that the people are the real danger.

The ending is your classic horror ending so I won’t say how it goes but you aren’t expecting a happy ending here anyway. We get a few jump scares but the last one doesn’t even make any sense. I don’t see how this person would be here given what we just saw. That’s absolutely impossible, it’s just not going to happen and is here for pure shock value. The film simply couldn’t leave well enough alone and it makes the whole journey feel even more pointless.

Overall, This film is just pretty bad. There’s already not much to salvage within the sub genre when you take it to the horror extreme and this one lowers the bar further by adding all kinds of unnecessary plot elements. The only thing I would say for it is that the design of the Cube is rather solid. I liked the various colors and there were some decent background music tracks within. The mystery itself might compel you a bit but as the film goes on you get the sense that you’re not going to be getting any answers to it anyway. You will have your headcanon at least which will have to do. Of course with more films out you may get all of the answers there. I wouldn’t advise checking this film out or any of the sequels though.