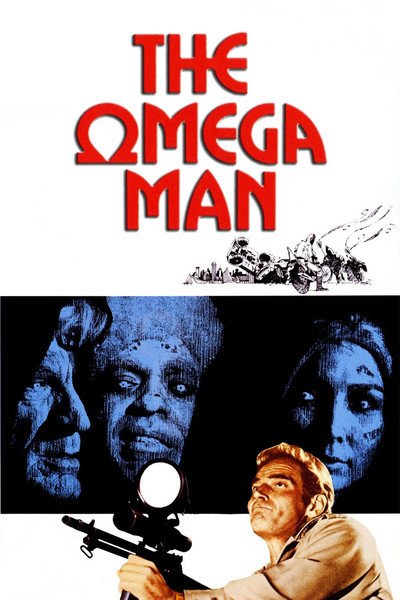 The Omega Man is another film in the classic story where humanity is seemingly wiped out so one guy has to survive on his own. That said, the premise is quite different here so you find out that other humans are alive quite early on. I have to say that most of the changes in this film were for the worst though. Ultimately it’s about on the level of your classic zombie film which isn’t really a complement.

The movie starts off with World War III and the human population is effectively destroyed by the chemical warfare. Fortunately Robert was able to survive due to a quick vaccine he had at the ready. As the last sane man alive he gathers supplies during the day and then keeps to himself at night. Those who have been infected can’t move freely in the day so that at least gives him a chance. See, the infected are led by a man named Mathias and they’ve created a cult of sorts where they want to hunt down anyone who still uses technology and isn’t cursed. Naturally Robert would fall into that category.

He’s held them off for a long time but when they finally capture him he is fortunately saved by a lady named Lisa. She explains that there is a whole resistance force that has escaped infection so far. Robert realizes this may finally give him a chance to recreate the vaccine and give it to everyone. Can he pull this off before Mathias and his troops take the heroes out? Additionally, will the rest of the humans only serve to slow Robert down and get him into trouble? That tends to be how things go in these films anyway.

The movie starts off well enough. It’s pretty interesting to see the deserted town and you feel how ominous the whole thing is. We see a shadow early on and you’re wondering what that is. Is it a zombie, enemy soldier? If you don’t know the plot before going into the film then there’s definitely a lot of suspense here as you wonder what exactly is going on here. It takes a little while before the film really lets you know what the score is in that respect. The beginning is just the best part of the film to be honest.

I also thought Robert does a good job of having fun here. When you’re the last man on Earth or seemingly so, you definitely better have a good sense of humor or you’re going to end up getting bored. So he talks to himself, plays games, and just has a good ole time. Of course he is lonely but he does a good job of hiding it and keeping himself active. I think that’s really the best thing to do in this situation. He can handle himself well and has good gun skills too. He even has that science background which comes in handy later on.

Where the film starts to buckle is when we meet the villains. The group is led by Mathias as I mentioned and he’s a very annoying main villain. He’s turned the whole situation into a cult where they attack the survivors but without a cure that means his gorup is slowly dying as it is. So there’s no end game here or any possible future where they are okay. His struggle seems meaningless. The film goes out of its way to show how they are all plagued by this disease and so it’s hard to even look at the characters. They’re all badly disfigured and have a lot of issues going on. It’s a shame that they are all brainwashed so thoroughly here.

Even though they’re sentient, for once I have to say that mindless zombies would be preferable here. These villains just seem so irrational that they may as well be mindless so it’s almost worse. Then you have their designs which hold them back as well. Yeah I could have done without these guys. Unfortunately the human characters aren’t very good either. First off you have the main heroine Lisa. At first she seems reasonable, a tough fighter who has survived in this cruel world for so long.

Yet, it feels like she doesn’t remember her survival skills when it counts. Near the end she decides to go and get some groceries, but Robert wisely points out that this isn’t the time for that. Villains can be anywhere and they can make it another day or so before it’s time to leave down. Well, she leaves anyway and things don’t go very well. In theory it should be tough for these guys to catch anyone with how slow they are but unfortunately she ended up being easy pickings for these guys.

Then you have Richie….oh nooooooo! You sort of know exactly when he’s going to make a bad move here. He tells Robert that he should either murder all of the cult members or try to cure them. Robert doesn’t want to mess with these guys since he was already captured once and refuses….so Richie figures he should go over there. Richie may have had connections before but this is really just a bad idea from the jump. You really should not be putting yourself in harm’s way like this. It causes a whole ripple effect across the story. The whole climax isn’t entirely Richie’s fault but he plays a big role in it.

Dutch is mainly safe because he doesn’t do anything although you will wonder where he is. He vanishes for large chunks of the movie and the resistance doesn’t appear until the end. It’s probably for the best that he wasn’t around or things would have gotten dicey for him too I suppose. By the end of the film you just feel like everyone ended up getting in Robert’s way. Perhaps he would have died eventually by himself anyway, you could say there’s a good chance of that. You still just wish things could have gone differently for him by the end.

The writing’s not bad here even if the characters are annoying most of the time. The romance is really rushed though and definitely could have been cut out of the film. Removing those scenes would help the film and in the middle of an apocalypse who is going to be distracted by romance anyway? There’s bigger things to worry about and that can wait until after the situation is resolved. At least that’s the way I see it.

Overall, The Omega Man is held back by the characters and is held back big time by the villains. It’s rare to say that zombies would be an improvement which shows just how bad these guys are. The climax isn’t very good and the movie does not end on a satisfying note. The romance doesn’t help matters either and so you’re left with a film that has a lot of weak points. All the best scenes in the film are from the very beginning and there’s a sharp decline once the other characters come into the mix. It’s almost inevitable that some humans appear but it would have been best to have kept that to a later point in the movie. The action’s good at least so if you can get past everything else then that’s always a fun sliver lining.