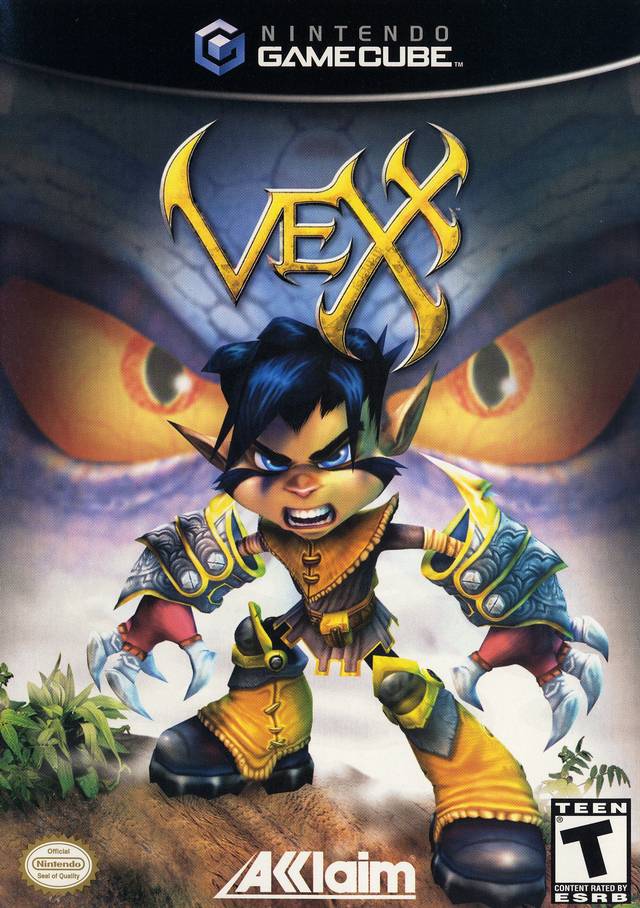 Vexx is one of those platformers from a million years ago that nobody has really heard of. It should have become the next big thing but ultimately just couldn’t make it that far. While the gameplay can be really fun at times, there are some clear issues here and I suppose those were just big enough to keep this from being rated higher and selling more. Having more cutscenes would have also done wonders for the game if you ask me.

The game starts off strong as we see the villains show up and take over the world real quick. Vexx being forced to work in this cruel world where the villains currently rule. He ends up revolting after the villains murder Vexx’s grandfather. Vexx will need to uncover a bunch of demon hearts in order to put an end to this but will it really be so straight forward? Why does he have these incredible powers, why is there a witch who seems to be in the way and why is this old man so eager to help Vexx? All of these questions will have to remain on your side for a while as the game only has a few cutscenes in the whole game. For example, after that intro there is not another cutscene until very deep into the game and then you get some for the ending.

This was a bit of a missed opportunity as the intro hinted as a grand plot. It was going to be daring, emotional, and dramatic. Instead you are left to quietly play through the various levels until you get to the end. There are some good levels here and I’ll get into that in a second but the story ends up being more of a bust. There is a cool cliffhanger for the sequel at least but that’s probably never going to show up anyway. I mean, we have been getting a lot of revivals lately but I feel like Vexx would not be at the top of the list.

Gameplay is the most important part of a platformer though right? So lets get into that. The game is modeled after the Mario style, I would even say Mario 64 in particular. You have the various portals that lead into different worlds. Each one has between 8-10 hearts in it and when you get one, you are immediately taken out of the level. (Mario Odyssey did well to change that) You then go back in to get another one.

The tasks for the hearts are all different. Some come from beating a minigame, others are for finding collectibles, and then others are just scattered around the world. Ideally you want to grab around 7 of the hearts in each world so that you don’t have to backtrack later on. You only need 60 out of the possible 81 hearts in the game to reach the final boss so if there is a heart that you are having a lot of trouble with, I would say not to worry about it too much. Just keep on going to the next one and you’ll be just fine. I thought this was a good way to handle the collectathon part since you never feel too stressed as a result.

My favorite parts of the game were the minigames as they felt like something out of Mario Party. You could have made a good multiplayer mode out of that without a doubt. There aren’t many in the game so you should saver them. For the actual platforming, the jumping and combat are both good. Combat could be a little more balanced but you can cheese it in a lot of ways that save you time so it’s something I don’t mind overlooking a bit. The camera angles are certainly the weakest part here. It will sometimes just randomly change so you end up falling to your doom.

I think the game is a bit stingy with how it kicks you out of the levels the whole time. It’s rough to have earned 80/100 of the eggs only to be thrown out of the level because you cleared another mission. It’d be nice if you could just stay in the world after you got a heart and keep on going because some of these levels are long so getting 100 eggs can take a long while.

As long as you go with the hearts you find easiest for your particular style then I expect you will be progressing through the game at a fast rate. The toughest part of the game by far is the final boss. You have to beat 3 phases of the boss in one shot as losing at any point sends you to the beginning. The boss plays out like a beat em up as you have to fight numerous opponents and it seems partially luck based with how RNG the super fast fireballs are. That boss took forever to beat and I wouldn’t love to have to fight him again. My biggest tip is to defeat the hordes by doing constant jumps and striking the ground below you. Don’t try to fight them head on. For the second phase, don’t move. Let the boss circle you and only jump when he’s about to attack. You have to strike the head and then go to the back and flip him over and then strike from the top. You have to do this several times so good luck. I don’t expect you will be completing this battle on the first try, far from it.

Either way you can see the potential behind this game. Mix in a better camera and some quality of life updates and this really could be like Mario 64 or Mario Sunshine. The game’s really going for that angle with with a wide range of levels to choose from, I would say it succeeds for the most part. What holds it back is that some of the hearts are more annoying than fun and losing sets you back so long in some of these. Mario always ensured that every level was fun even if it took a while. SO if we get the level designs a bit more polished then this would be ready for the next level.

The graphics are also good here. I liked the designs and the worlds had a lot of uniqueness to each one. The attacks look good and the game just holds up well here. Then you have the soundtrack which is solid. There are quite a few solid tunes within the game and they have that old school rock feel to them. Something that I always like to see in any game.

In terms of replay value I guess there’s a bit. You can try to get the two bonus suits in the game which give you fire and thunder abilities. They are even needed for grabbing some of the hearts. I just couldn’t figure out where to find either one of them so I was glad that I could skip those missions. Apparently the fire suit is somewhere in level 1 but I ran around that place for ages and never saw it so I wonder where it is. As you play through the game the hearts get a bit easier since you know what to expect so maybe the same would have been true of the suits if I could have found at least one of them.

Overall, Vexx has good gameplay but it could have been better with just a little more polish. Throw in more of a story mode as well and that would have really been a winning combination. It’s a shame that it couldn’t be better but in that case I probably would have played it years ago. The platforming genre is one that always has a lot of competition so if you aren’t first then you might end up being last. You can get this game for a fairly cheap price so I would say you should make a play on it. It’s still worth the price and I had fun with it. The game is fairly short at well under 10 hours long but that’ll do the job.