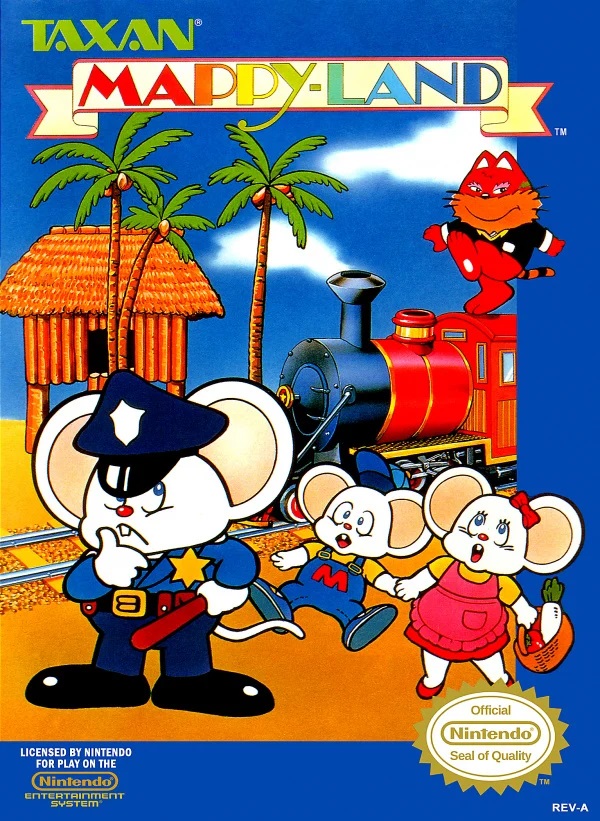 Mappy-Land is a fun game and one that manages to have a fairly unique gimmick to it. Instead of jumping on all of the enemies or heading to the goal, each stage is a mini collectathon. You have to grab all of the parts in each level to proceed. Some levels even have a second set of collectibles to grab as well so you’re always on the move here. At times the level’s goal can be a bit too vague for my liking but on the whole this is definitely a fun game that you should enjoy. It’ll be over in a breeze but the level designs are all solid and I have to imagine that if this was before the Switch Online version it would have been extremely difficult to complete. I would have died so many times if not for being able to alter my fate.

There’s not much of a story here but what we do have is told through little cutscenes like Pac-Man. It even follows some of the same story beats as we meet the wife and kid. Definitely an emotional kind of moment right there but it’s safe to say that you’ll really be here for the actual gameplay either way. So with that as the main hook you should have a good time. My advice would be to learn the attack items right away since those help when you’re in a pinch. Also, you can actually jump over the minions which is extremely handy.

At first I would just run away from them whenever they showed up so being able to keep going where you wanted was a game changer. Naturally the risk is a lot greater since if your timing is up even by an instant you will lose a whole life there. You definitely gotta be careful about that but otherwise you’re all set. When you’re on the balloon for the aerial levels, just try not to get too close to the enemies. You can blast them from afar and then move forward. Your weapon has a lot of range.

This tricked me a bit at first so once you get the usual collectables you need to go inside of the Church. That’s where you will find the key item that will let you go further. Without it you will end up being essentially stuck in place so you definitely want to keep that in mind. I remember wasting a bunch of time on the train in one level because I wasn’t sure what to do next.

When you wait too long, an unbeatable enemy will appear. It’s like a floating plate that keeps going after you and any contact means defeat. Of course, that is true of any enemy in this game since Mappy has 0 durability but this thing is extremely fast and can fly so jumping won’t cut it. If you see this enemy in a level it’s fair to say that it may already be over for you. Dodging it or staying our of the way are both incredibly difficult and nearly impossible to actually pull off.

Meanwhile the graphics are pretty fun here. I thought they were nice and colorful and the art style really holds up even to the modern day which I find impressive. It’s not easy for a game to hold up over decades but it is absolutely possible if you play your cards right. The soundtrack is more on the forgettable side though. Not bad…just good luck actually remembering any of the tunes. It’s not as iconic as Pac Man or as energetic as Mario which leaves it in a bad spot. It just doesn’t excel the way that it could have.

The game is reasonably short so you’ll probably beat it in a day or 2 if you’re focused up. Either way there is some replay value. This game keeps going on loop after you beat it so you can still try to work on your high score as you go through. That’s at least something to aspire to right? I don’t see you sticking around for too long on this one as there are just so many other big titles to check out but all in all it’s just a well balanced title.

Overall, Mappyland is definitely a game that I can recommend. It’s just a fun little experience and one of those games that is extremely easy to plug and play at any time. I certainly had fun with it at the very least. A modern remake of this game could be a lot of fun and it’s also a good way to show people how to do a collectathon. A proper one should have the collectibles built into each level so you can’t proceed without them. That way you aren’t suddenly blindsided by having to go back and grab them later. I feel like this series is so forgotten that a remake is unlikely but never say never right?