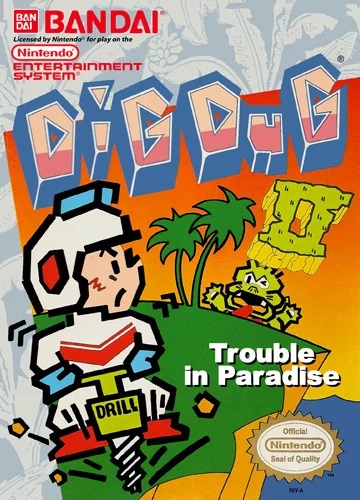 Dig Dug II is a pretty fun game. I wouldn’t say it quite holds up to the first one but it’s hard to say how much of that is just pure levels of quality and how much is nostalgia. If I were put to the ultimate test though I would still say the first just wins on merit. The underground levels worked perfectly for the series and same with how the gameplay was set up. There’s a reason why it became an all time classic after all. The sequel is still good though and it was certainly good enough where I kept going until I beat all 75 levels.

There isn’t really a story here though so just go in and start blasting all of the enemies. Your objectives will be clear from there. Now there is a tip I found out while going through the levels that will help you out. So you know from that start that you just press A to start plugging the enemies full of air so they pop right? Well, you may feel like pressing A as fast as you can is the way to go but that’s not quite right. It’s actually more effective to be pressing A while moving forward. For some reason that speeds everything up really quickly so you can potentially take out several enemies before they get to you.

The reason why this is huge is because in the latter levels you need every second. You have numerous enemies rushing at you and a single touch will mean that you lose a life. So every enemy you can knock out is one less that you will have to worry about later on. To clear a level you have to beat all enemies so it stands to reason that destroying them all as fast as you can is the way to go right? Beyond that you can also use your drill to make little barriers that the enemies will have to navigate around or try to dig under. Both options still buy you some more time as well.

Just play as fast and hard as possible. Your instincts will quickly catch up and then from there you will know what to do without an issue. The game is very intuitive after all. While I didn’t think the levels or gameplay style beat the original, it’s still a fairly high quality game here. There was a lot of dedication put into the title so you know from the start that this one’s a keeper. It is easy to just plug in and play plus it has a lot of replay value in trying to beat your high score. It may be a little more slow paced than some other arcade games so it can take a while to get to your turn if you’re sharing at an arcade but if you’re just trying to beat yourself then it’s perfect.

As for the graphics, they hold up pretty well. The game is nice and colorful with good minion sprites as well. You always know what is happening nd I wouldn’t say anything is blurry. It’s just a solid experience. The soundtrack is less memorable though. While you’re playing you probably won’t notice a thing because you’re just concentrating so hard. Not necessarily a bad thing though, just means that you’re really invested into the game the whole time.

If there’s something I would have liked to have seen in this game, it would be boss fights. I think a solid boss fight would have been really fun and if you spread them out to once every 10 levels or something, it would be a nice way for you to feel like you’re really making progress. I’m not exactly sure how you’d program the boss fights but feel like there is a lot of potential with how the gameplay is. That may have been the thing to help this one beat the original.

Overall, Dig Dug II is a fun game. There isn’t a whole lot to say about it because of how straight forward the game is. You either get it or you don’t but it’s not like there is a lot to learn or describe. It’s really just the same move that you used over and over again to get to the end of the level or to block off the enemies. Once you’ve learned the ropes then it all comes down to your reaction times and planning. I want to say you’ll get pretty far even without using the access points but defeating all 75 levels without restarting or rewinding once would be extremely difficult. Definitely not a challenge for the faint of heart.