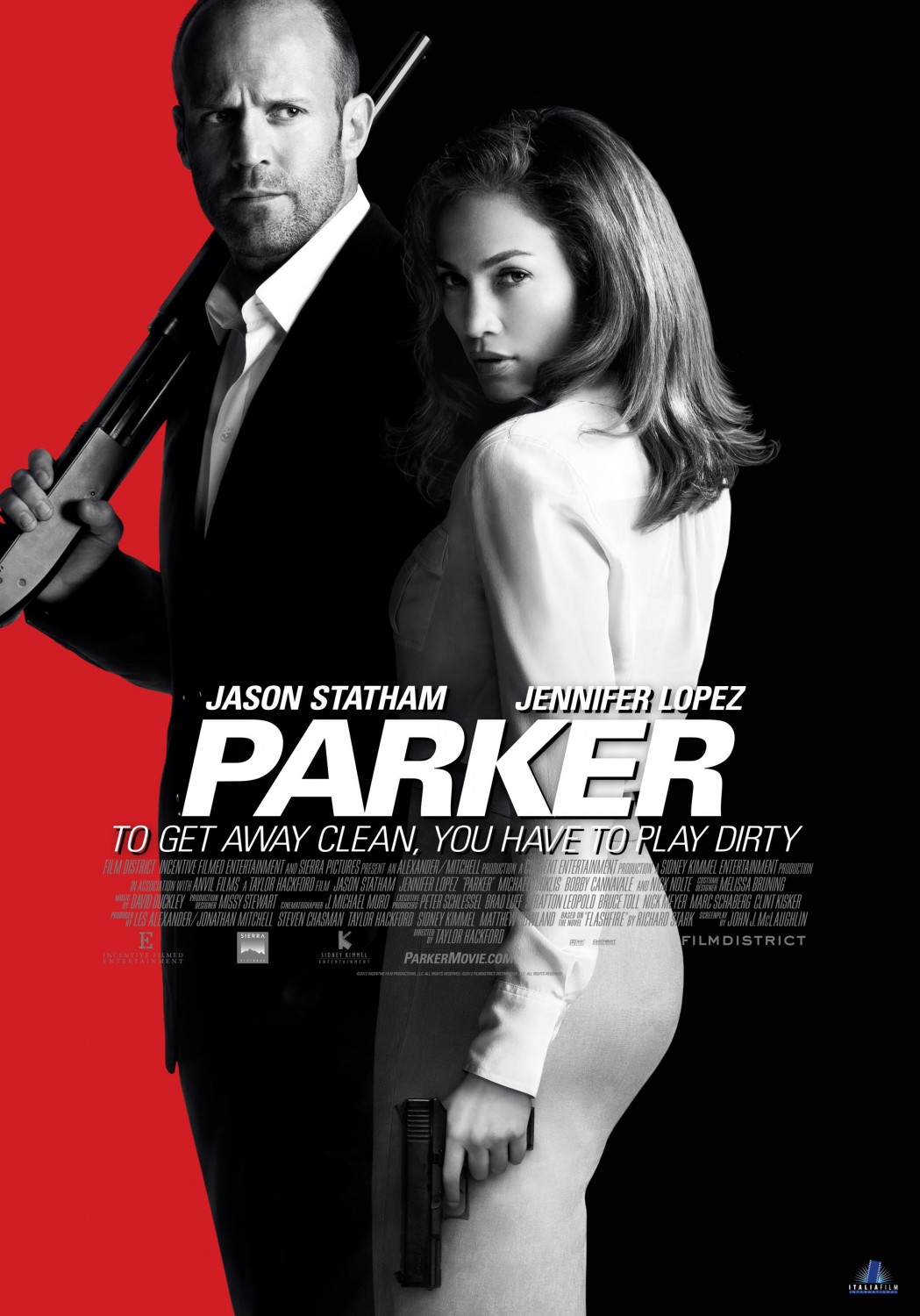 Time for one of those classic revenge thriller films. Parker doesn’t really try to break out of the ordinary but the execution is strong enough where that’s not really a concern. It’s an entertaining film that’s rather solid and at the end of the day that’s all that you need. The ending reminds me of Blade and John Wick too. This could have become a pretty fun franchise but I guess it wasn’t meant to be.

The movie starts with Parker completing another mission with a group of thieves. They’re rookies that made a lot of mistakes but at least they’re alive. That’s when one of them decides to change the terms of the deal and tells Parker he can either help them out on another caper and put all of his money in the pot or get shot. Parker decides to get shot so he’s wrecked and left for dead. Fortunately a passing family was able to nurse him back to health. Parker wants revenge now and he will do whatever it takes to track these guys down.

Meanwhile in the B plot you have Leslie who is really trying to sell houses and make a name for herself but it’s been tough. She’s been upstages by her coworkers for a while now and her current life just feels rather empty. Well, one day she notices Parker and what a shady fellow he is and figures this is her big chance to get rich. If she plays her cards right then a whole new life will open up for her but if she makes any mistakes this could be curtains. The two plots certainly feel very different and it’s a little while until she actually appears but of course the plots do line up.

Right off the bat I can tell you that the inevitable romance is not very good. One thing to consider here is that Parker already has a steady girlfriend in Claire. So as soon as Leslie appears you already know that Parker is taken so any romance that starts up will really make him look bad. Unfortunately he doesn’t stay totally strong and reject her so we do have a brief romance stint here which is completely unneeded. It’s really the definition of having this here to meet the romance quota when it would have been perfectly reasonable to have just had them stay as friends. Would have made a whole lot more sense too.

With the main plot being about chasing the mobsters, you do want to have more going on since this is rather basic. None of them stand a chance against Parker and they know it so all they can do is put enough annoyances in his way to try and slow the guy down. Every time Parker closes in on the mobster there’s a whole other level to this. The actual leader is hard to find even with Parker’s connections. They definitely move around a lot but the fights are good when they happen. Parker definitely knows how to fight when it’s time to rumble.

His only disappointing scene is at the very beginning when he gets into the car and seems to not have any real plan before getting shot. He really should have died there and is supremely lucky that things didn’t work out. It would have been a rather underwhelming way to go out and you feel like he should have been able to handle things a little better with how experienced he likely is by this point.

As for Claire, she has much more reason to make mistakes because this just isn’t her field. Just a day ago she was a normal real estate agent and now she’s in the field with all kinds of dangerous threats. You can absolutely excuse her not always knowing the right thing to do but I can’t afford the same to Parker. Leslie is ultimately a fun heroine. Her mother and dog also make for fairly decent supporting characters.

Claire doesn’t appear a whole lot but she gets some points for not nagging Parker the whole time and she is quick to come over and patch him up when the guy gets injured. She makes it clear that she is in his corner the whole time. Then you have Hurley who is definitely a solid character. As the experienced veteran in the room he is able to follow what Parker is saying the whole time and has a lot of connections of his own. He may not be young enough to get into the field nowadays but he does contribute a whole lot.

None of the villains are all that memorable though. Picture any random mobster and you’ve got these guys. From the start it was a bad idea to double cross Parker and move on to this mission. If they had just waited a while and suggested it peacefully then maybe he would have been on board. Either way why do a double cross there and add a huge risk to the operation. For all they knew the car could have crashed or Parker could have shot a few of them and that would wreck their entire plan.

I enjoyed the heist from the beginning of the film though. The villains may have messed it up but it’s cool to see all of what was going on. The costumes were good and Parker did have a solid disguise on which definitely made the scene a little funny even during the hold up. His Texas accent was also pretty good and that made for a lot of fun scenes. The film knew how to handle its humor for sure and those would be some of the best scenes.

The action moments still get tense of course and so this balances out into a good film. It’s not quite solid enough around the board for me to take it to the next level but it definitely never gets boring. It’s got a good amount of replay value and the writing is good enough. The fights are good and we really get to learn a good amount about the cast. So if they wanted to make a franchise out of this it would have been a good idea.

Overall, Parker is a good action movie. It’s very by the numbers for the most part but I wouldn’t say any part of the movie is phoned in. It’s still got a good amount of effort behind it at all times. It’s going in a lot of different directions are far as the tone is concerned and that could work well in a sequel too. Or if they want to go with one tone and stick to it that would work too since they were all solid. The film’s probably forgotten by most by now but give it a shot if you come across it.