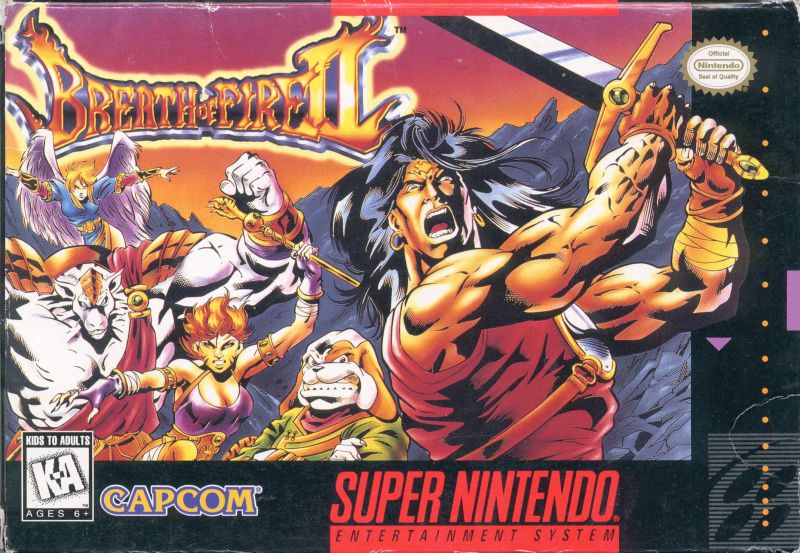 I was really satisfied with the first Breath of Fire and I can safely say that this one is a really good sequel as well. I wouldn’t quite say that it beats the first as it loses out on at least one big quality of life feature but it’s still a really solid game all around. To compensate for that it does have the better story here. Either way if you like RPGs then you will definitely like this game.

It actually starts off with some Undertale type vibes as the main character and his pal enter a dark cave and things get rather trippy. You have an evil eye that it always running around, a giant monster that murders them, and things like that happen. Finally, a few years pass by and Tery’s (That’s what I called the lead) best friend Bow decided to become a bit of a thief. He is going to help this one guy who was already stolen from so in a way it’s like payback but it backfires and now everybody thinks he is a thief. Tery must quickly come to his aid and prove Bow’s innocence. Additionally Tery must find out why nobody remembers him and why his whole family is gone. Does it have something to do with the main villain?

There are a ton of monsters in this world so naturally it is not quite the kind of place that you want to be when things get tough. Tery got to meet one of the more powerful creatures in the tutorial after all even if he isn’t sure whether it was a dream or not. There’s this whole emotional system too where talking to people will light up or darken your crystal but there didn’t seem to be much of a point to it. Perhaps it alters your ending but I would have liked it to have made a bigger difference throughout the game. I appreciated how the game would get rather spooky at some points but ultimately it’s more for show than anything else.

The game is fairly long and you can certainly expect to take many hours to conquer it. Unfortunately the game doesn’t track your play time but it has to at least be 25-30+ hours. There’s a whole lot to do here, villages to help and party members to recruit. Additionally there is no easy way to bypass minions. So in the first game you could buy an item that stopped them from appearing for about a minute or so. I would stock up on as many of those as possible and it was a great deal but that’s not the case here. There is an item that (barely) reduces how often they spawn but it can’t prevent it.

Half the time it feels like the item didn’t do anything to be honest so it was a bit of a waste. It’s too bad they didn’t bring the item from the first game back because it’s just so much more peaceful when you’re able to run around and don’t have to worry about minions attacking. You can explore to get treasure and all kinds of things like that. Trying to run is usually not going to work so you have to keep rewinding until it does or you could just fight every minion in your way.

It is good for grinding I suppose. Speaking of which, be prepared to grind a whole lot here because the final bosses suddenly jump up a bunch of levels. They were not playing around but I would expect nothing less from an RPG final boss. Those are the kind of opponents that you want to go all out. Show us why you are the demon king or whoever the final boss is. The final battles are really an endurance test so buy as many potions, revives, and MP items as possible. I had over 100 items when you add in the amounts for each and I still barely made it. That was definitely not easy in the slightest.

The game’s ending isn’t super satisfying though. You can’t help but feel that Tery made the wrong choice unless there is some kind of true ending here. He overthought things but it did work as an intense twist of sorts. The game always has that uneasy feeling thanks to the prologue which shows just how effective it was even if the rest of the game plays it straight for the most part. The story is really engaging so you should be having a blast from start to finish. Tery’s companions were definitely really good as well and if anything the toughest part is deciding who to keep home.

Each ally has their own special ability which you’ll need on the hub world. One can fly, one can swim, one can jump, etc. So there will be times when you have to switch companions and you just can’t worry about it. Additionally some characters have a 1 on 1 story fight that can’t be skipped so if they are at a low level then that’s game over. You obtain shamans to power up your fighters but one if missable which can be disappointing if you didn’t get him. So if you see a chance to donate some money later in the game, make sure you click donate 20 times. If you don’t do that then you won’t get him at the end.

That’s really my main tips here, you should be able to get through the game with no real issues. The graphics are real good here and some aspects of the game have aged extremely well with the visual style. For example there’s one boss fight where you’re falling off a tower and then there’s a scene where Tery is running through the flames. You don’t see a whole lot of cutscenes using the sprites like this outside of combat so I thought that was pretty cool. The soundtrack is also good although as far as RPGs go I wouldn’t say it stands out a ton.

This is the kind of game that just freezes once you beat it so that means there is no replay value. Fortunately the main campaign is so long that this really is not an issue in the slightest. You’ll get to have your full barrel of fun here. The cast is fairly solid and of course Tery steals the show even if he’s the silent kind of protagonist so you won’t really see him talk here. You just know that he has what it takes to win.

Overall, Breath of Fire II is a great follow up to the original. I would probably still learn towards the first game as a whole even though this one had the better story. Breath of Fire is certainly one of those games that could do well with a modern sequel or remake. After all stories about dragons are always cool and this one has plenty of them. It’s a very challenging game so you do need to keep your guard up but then making it to the ending is that much more satisfying.