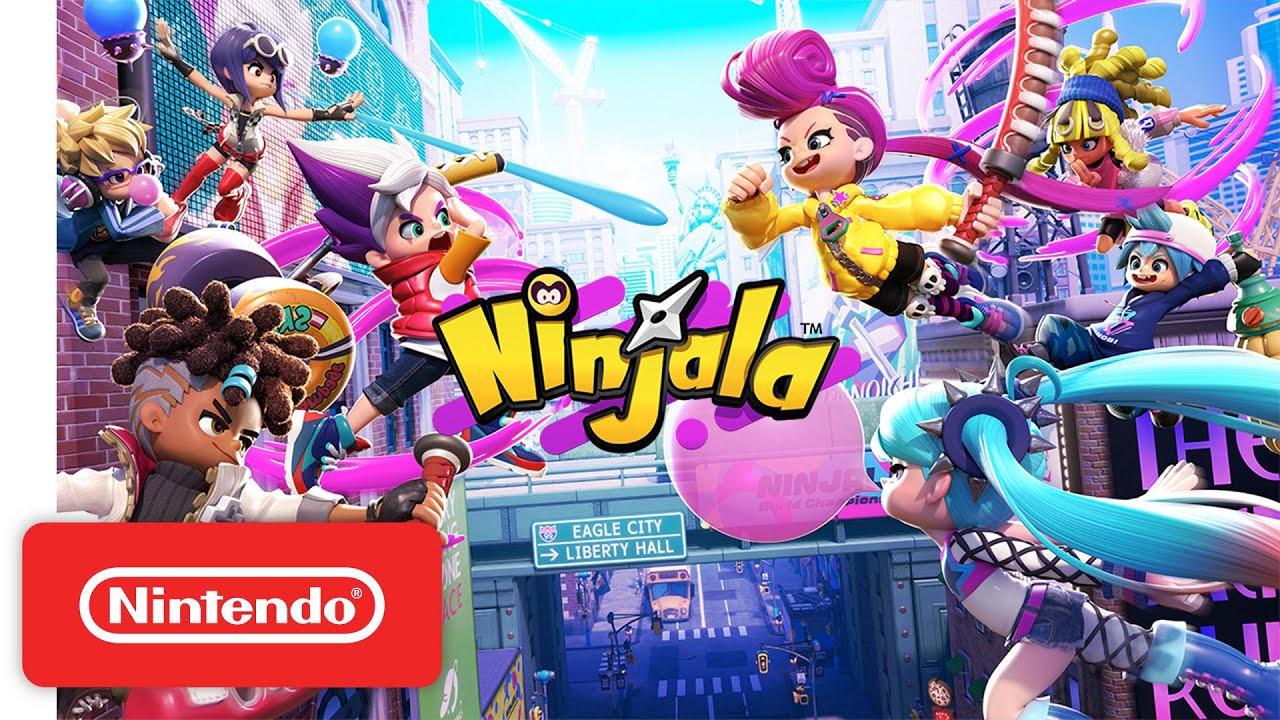 It sure took me a while to play this game but it definitely lived up to the hype. This may be a hot take but pure gameplay wise I actually prefer this to Splatoon. Of course a big part of that is the fact that you’re on your own here and don’t need to fight as part of a team. Then you’ve also got the close combat gameplay which is even better than the ink shooting.

The game even looks a lot like Splatoon which I have to assume is intentional. The game has a lot of modes but naturally you’ll be most interested in jumping online to get right into the battle royale. There are around 8 players in a given match and you have to try and get the most points. You obtain points by grabbing orbs around the stage, more points by breaking these little sandbags all around, and a ton of points by knocking out other players. The gap in points is rather large: 20-100-400 so knocking out players is your best bet. They’ll be trying to get in your way regardless so it makes sense to try and take them out right off the bat.

The controls are fairly simple here. You can run along the ground and up the walls as well as jump. You have a dash attack which lets you get up close and from there you have your standard attacks and a super attack once your meter gets high enough. It seems like characters have different moves so you’ll want to learn them but your main method of attack will be with classic attacks. Land a good combo and you’ll take your opponent out in an instant. It’s definitely the way to go if you want to be the one wearing the championship belt.

The thing I don’t like about the gameplay is that it has a rock paper scissors mechanic going like in Pokken. So when you clash you both have to choose a direction and hope it’s the right one. I never cared for this kind of mechanic and don’t get why it tends to pop up every now and again. Why would you want to throw some random variables into a fighting game? That seems like the last genre to add such a thing since you want it to all be about your individual skill right? Seems to me like throwing this in just muddies the waters.

It’s also pretty much inevitable that you will have several clashes in every fight so get ready to see this mechanic a lot. Personally I’d say the game should drop it and then it would feel a lot more balanced. It would really make you have to focus on when you want to attack and try to stay cautious so nobody ambushes you. Yes that would definitely be the best way to do it and I think that would work out for everyone.

Well, even with that I did manage to win my first few rounds but I suspect the game threw in some bots. I can’t prove it, but I was fighting several opponents with very generic names like Paul and Chris. No extra letters or numbers so I find the odds of them getting those names to be rather slim. I was also dominating throughout and sure I’m great at picking up on a game’s mechanics right away but I was a little suspicious. It was almost too easy which started to tip me off. Maybe I’m overanalyzing this, it’s possible but I’m not buying it.

After a few wins then I started seeing a lot of fancy names and the games quickly grew harder. Ninjala is certainly a game that is easy to start but hard to master. Don’t expect that you can just walk in and start claiming wins. This game isn’t quite so easy as all of that. There are quite a few mechanics to master and that makes sense since the tutorial seemed really large. I quit out of it after the first lesson but you’d want to study it all if you intend on playing for a long while.

I should also mention that there are some bonus stars. You’re scored by total points at the end of the round but you then gain some for doing the most damage, most KOs, etc. So keep that in mind, just because you have the most points when entering the results screen doesn’t mean that you will win in the end. That actually bumped me down from 1st to 2nd once. It’s an interesting idea but I think the game should go by base points. If you win then you win, no worrying about extra factors or any of that.

The graphics are solid. This definitely looks like a very modern game and it’s also very colorful. There’s a lot to look at and the levels have a lot of detail to them. I definitely have no issues there and the soundtrack is good as well. This really is a solid all around title and if you ever threw in a big cinematic story mode then this could be a great game even without online. The gameplay is certainly polished enough to make it work.

Overall, Ninjala is a fun game. I don’t really see people talking about it anymore so its window of fame may have already ended but the fundamentals are sound. I like that you don’t have to enter in teams like a lot of the similar online titles. You can just jump in and take names. While the battle royale results being based on points does mean that you can lose even while playing super well, it won’t be too likely. Beating opponents gets you the most points so as long as you do that well then you should be in high spirits. I would definitely recommend checking this game out for a fun blast.