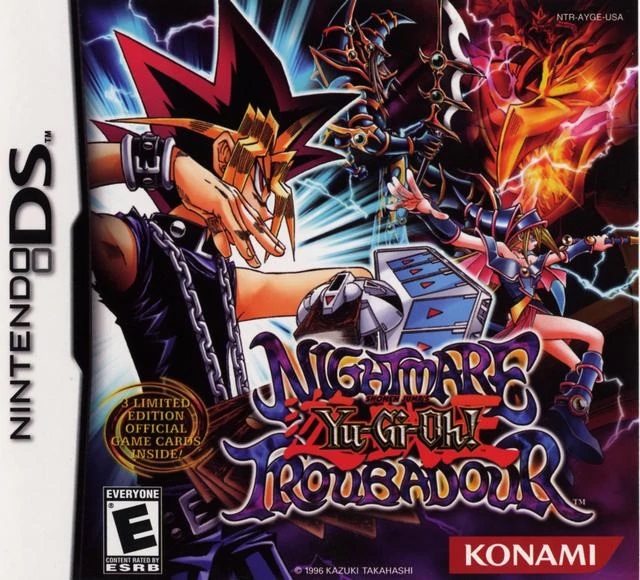 Feels like quite a while since I completed a Yugioh game. They definitely tend to be on the long side so you always get a whole lot of content and satisfaction from them. This one even has a full story along with the usual duels. It has a day and night system that I don’t particularly care for but ultimately it’s still a great game. One that would be nearly impossible to complete without the internet though as everything is so secretive. I suppose eventually you could pull out the win but the play time would certainly skyrocket.

The story is sort of an adaption of Battle City but extremely loose along with minor adaptions of the Noah and Rebecca filler arcs. You play as a new character who I called Terry and you have to try and be the best duelist of all time. To do that you will need to become the World Champion and crush every opponent who tries to get near you. It won’t be easy but this wouldn’t be satisfying if it was a cakewalk right? Will Terry really be able to adapt and take out the villains or will he be wishing that he could just duel for fun?

Lets jump right into what works about the game. First off, there are a lot of cards here so you can customize your deck really well. Initially it’ll take time to build up enough funds to get the cards that you really want but gradually this won’t be an issue. Eventually you will have all that you need to make a deck. So far I have never made 2 decks that were really similar. My deck ends up being really different in every Yugioh game and I think I know why. See, the cards that you get at the beginning of the game are super important because subconsciously you start to build around them. For example, even after I had a lot of really good cards, I kept in a ton of my originals.

I’d already been dueling with them for so long so why remove the right? My deck was more trap oriented so I could block opponent moves and then win with my 5-6 star monsters. I always have a hard time condensing my deck to 40 cards though so I tend to have around 60 or so. It does mean that sometimes you won’t get one of your cards in time but it also means that you will never be timed out. That has happened in the past and sure enough in this game I did have to win at least one match that way. Always make sure that your deck is larger than your opponent’s to be ready for such an attack.

The duels themselves can be a bit long and to this day no game has optimized the speed more than World Championship 2007. Still, it’s way better than the older GBA games which just couldn’t load the screens as quickly. Some of the menus in this game aren’t great so deck construction can be long but the duels themselves are very polished and work well. Ultimately I don’t have any real issues there. The gameplay is solid and in general I like Yugioh a lot so it’s a blast to be able to play through the duels.

The soundtrack is also good. A little repetitive though to be honest. Given how long you’re going to be playing the game, I think they should try to have a larger soundtrack just to keep things fresh. Usually there are only a few themes and it works like in Tag Force when all of the themes are amazing, but when they’re fairly ordinary you just feel like you’d like to see something else. The graphics are okay but the series is not really known for its visuals and I would say this game is in line with that. There’s nothing that jumps out at you.

I already mentioned the game’s length before but don’t expect to beat this game in under 35 hours. It’s an extremely long game due in part to how many duels you have to go through. I played over 100 duels in the game and there are story events you have to go through to get to the ending. These events are dependent on your dueling various people so it really adds up. You also can’t see who you are dueling ahead of time until you beat them a bunch and become friends with them. Hypothetically if you didn’t know what to do, the way to get through the game would be to keep challenging everyone over and over until you registered everyone as a friend. Some seem quite resistant though, like I beat Rex over 20 times and he wouldn’t become my friend.

Now on the downsides to the game, the biggest one is how the story is presented. Without a guide I really would not have been able to figure out where to go next. The randomness of the story is not a strength but a liability. Additionally, I don’t like how duelists randomly attack you at night and if you lose then it’s a game over. At least make it take you back home but don’t threaten me with losing a bunch of save data. I had to save constantly when it was night time just in case. Same with all shadow duels, if you lose then it’s all over. So if a shadow duelist sneaks up on you then it’s really going to end up being messy.

My deck was great but not unbeatable. I would still lose from time to time and sometimes I would get a bad draw. Part of the fun in Yugioh is how many different variations of the same duel you can have based on what you draw. So in that sense I thought the game was a little too merciless with this. There’s also a leveling up system but it seems almost pointless to an extent. You unlock decks by leveling up but that just seems like a way to really keep you from getting good cards for a while. It takes a lot of duels to level up too so I think that could have been really reduced.

Overall, I had my issues with some of the mechanics like the day and night system which keep this from being an elite Yugioh title. The core gameplay still ensures that it is great though and I did appreciate that we got a full story mode. Some of the decisions may have been a bit odd and it certainly aims to be one of the loosest adaptions that I’ve seen but I’ll take that over not having a story mode. If you want to check out a Yugioh game with a lot of content then this is definitely one to check out. You’re not going to regret picking this one up even if it doesn’t quite beat the top tier Yugioh games.