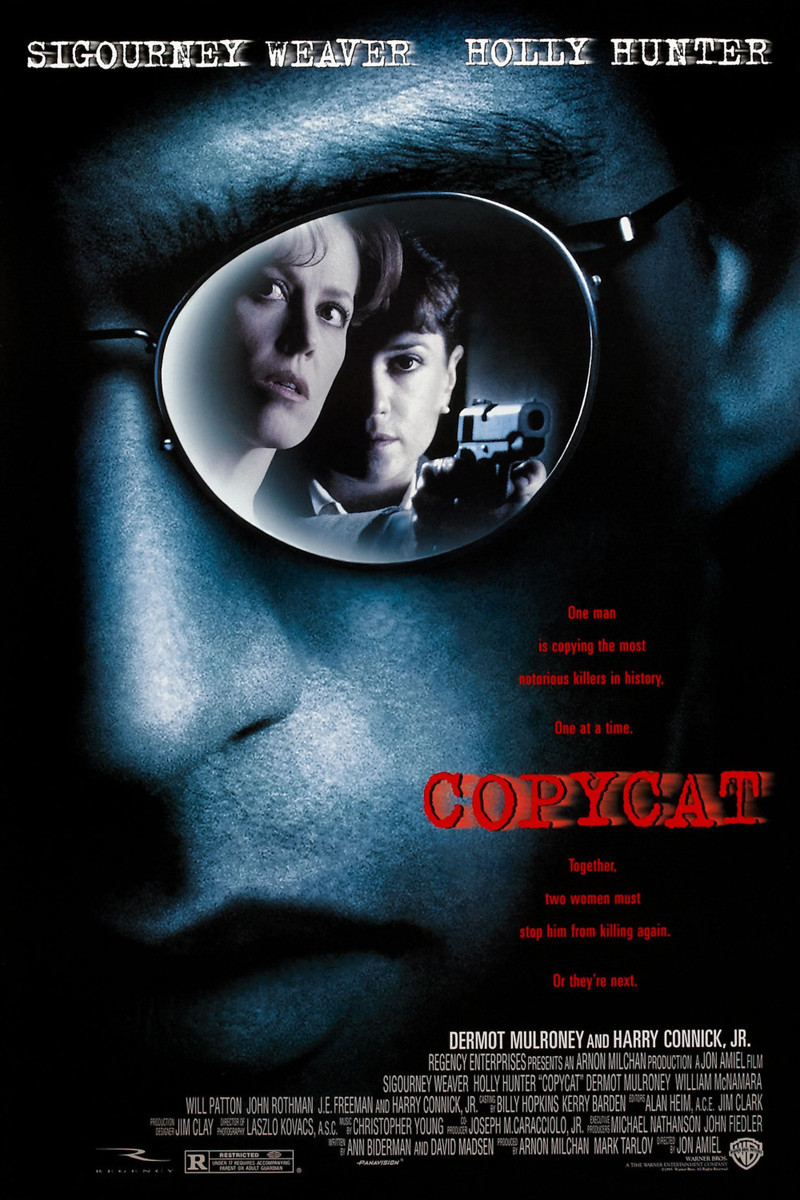 Copycat is one of those films where you know it’s not going to be so good right from the jump. The question is will it rise to mid status or will it just be bad? Well, in this case it never ended up recovering and this is probably a film you aren’t going to be checking out a second time anyway. It’ll just fade away into obscurity.

The movie starts with Helen giving a lecture on the various mass murderers of the day and how you have to be scared because right now even some of the classmates could be evil. Her doom and gloom speech is a big hit but unfortunately one of those murderers was in attendance and attacks her. The guy murders one of the cops but is ultimately captured. Unfortunately the experience scarred Helen for life and she can no longer leave her apartment now. She is completely trapped.

This gets a little intense for her when she reads the news and sees that another mass murderer has appeared. This is her specialty but it’s not like she can go out there to take names and find out what’s going on. Helen is given little choice in the matter though when the villain sends her a threatening message. Monahan and Reuben are the two cops who will be helping her out here but can any of them take down this new villain? One thing’s for sure, they need to keep their guards up at all times.

I’ve noticed that these mass murder mystery films tend to put the main character in a rather difficult spot so they can’t help too much. At least it happened twice which is enough to make me raise an eyebrow as bone collector did the same thing. Since Helen can’t leave and is racked with fear that limits what she can actually contribute to the case. Considering all of this she actually does rather well in looking at the clues and helping out. You feel bad for her too because you figure one traumatic experience is enough for a life time and yet she’s going to have to go for a second one now.

I thought she was a good character though. Helen is tough and talks back to the other characters while also keeping up her boundaries. She only allows her friend Andy to see any moment of weakness within her. To everyone else she at least tries to keep the image up the whole time. Her friend Andy means well and looks after her but you get the feeling that he is doomed from the jump.

In these films just about everyone is doomed for being too close to the lead. Usually as soon as a character appears you know they could be next on the chopping block. The villain here doesn’t have any special powers or anything like that but at the end of the day he does have the element of surprise and that’s hard to fight off. Certainly it’s difficult to combat that on short notice at least.

The villain here is one of those psychotic kind of characters as you can probably guess. It’s also hard to call this a murder mystery to the extent that the film isn’t really giving you a chance to find out who the murderer is for the most part. I suppose the mystery is more about finding him before he bumps someone else off. Unfortunately the tricky part is that it takes a while to find a pattern or any leads so the body count here is already rather high.

I liked the two cops on the case though. Monahan does her best to manipulate everyone and shows that she has what it takes as a cop. Her approach to everything is rather by the book which isn’t a bad thing but the film uses that against her at one point. She ultimately gets off a shot just like how the manual said to do but in the end it wasn’t enough. I blame everyone else at the scene far more than her though because she still did her part.

At one point I almost started to wonder if she was going to end up being a villain in a twist or something but I’m glad the movie didn’t go in that direction. As for Reuben, he’s a good partner. Helen even tries to give him some romance tips at one point although I think it’s a little dicey to be thinking about how to make a move while there’s a serious threat on the loose like this. Ultimately Reuben may be a quick shot but that doesn’t mean he’s super safe.

The villain from the opening scene: Daryll, sticks around for the film and that was unfortunate. We already have one psychopath in this film, did we really need 2? Any scene with this guy in it is super annoying and drags on. I don’t think they should have even given that creep much attention. I suppose they were desperate for leads but that’s when you get someone on the inside to rough him up a bit. That may be easier said than done of course but it’s just a shame that Helen had to work with this guy even for a minute after what happened.

The movie’s stinger for the sequel is also really weak. It doesn’t make you hyped for a possible sequel at all and is just a groaner. It could have done something, almost anything more interesting than that. I would have no reason to believe the sequel would be any better than this film. In fact, there is even the chance that it would just be worse in the end depending on who the main villain is.

Overall, There isn’t much to like about Copycat. It’s your run of the mill horror/slasher title. It’s really gritty and by the time the heroes come around it’s always too late. The victories here feel hollow as a result and nobody is ever prepared so they get bumped like it’s nothing. The writing isn’t anything special and this film is really one of those dime a dozen horror titles. I would recommend just steering clear of this one. It doesn’t even have anything super entertaining to talk about or that at least would make it stand out. I suppose I won’t forget the scene with the random criminal at the police station because of how random it was. Whatever could go wrong for the heroes certainly did each time.