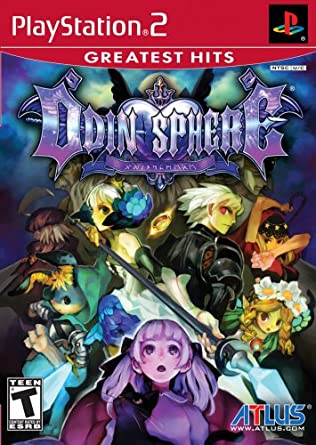 Now this is the kind of game I’m talking about when thinking about hidden gems on the PS2. This one is similar to Oni and Eve of Extinction in that I hadn’t heard of the game before randomly seeing it at a video game store. Then after playing it, the game turned out to be great. This title has a superb cinematic story with several different focuses and then a final chapter that brings all of the characters together. It’s something you don’t see too often and it works quite well here. I don’t have very many complaints at all.

In general the plot here involves the Demon King Odin who is trying to use the Cauldron for his own evil ambitions. He’s not the only one though, every faction on the planet wants this from the Underworld, to the Fairies, and even the fire demons. There are 5 main stories so you really see the POVs from just about every side. The fire team is the only one who doesn’t have a champion to represent them. Each character is ultimately fighting for different things, honor, love, revenge, etc. At the end of the day they will have to decide whether their mission is more important than saving the world as a whole. It won’t be an easy decision.

The gameplay is a 2D beat em up. An interesting angle here is that all of the levels are in the shape of a full circle. So for example if you run to the right then eventually you’ll be back where you started. Each area has a bunch of enemies to defeat or one mini boss. After beating them you can go to the next area. You have shop areas where you can buy food and other items, and then a big boss at the end. Defeating the big boss will end the chapter and move you to the next stage. If a boss is too difficult you can click to go home where you start the chapter again but you keep your EXP and items.

You’ll find yourself needing to do this quite a few times. This is one game with a heavy amount of grinding so definitely be prepared for that. This is a very hard game and the level ups are absolutely needed in order to move forward. There are two kinds of levels that you have to increase too. First is your health level and then you have your psypher level. The latter increases your attack while the health one is fairly obvious. You increase health by eating food and the psypher by absorbing energy from villains. That energy is what grows the food though so you always have to decide which area to level up.

For the final bosses you want to have each character close to level 40 in psypher and 30+ in health. You will have to use every character in the end by the way so make sure you level them up and have a lot of food before beating their story. This leads to the only annoying part which is that if you did end up beating the game with a character (And why wouldn’t you right? That’s the whole point of playing in theory) then you are penalized by being sent all the way back to the first chapter. So if you aren’t strong enough at the end then you have to beat the game again with each character. I had to go to the end with all 5 again in order to train which took a lot of time.

In the end this bumped the play time almost all the way up to 40 hours which is really long. Most of that time is earned but it did feel a bit iffy to have to replay so much of the game. They should have had a stage select or something. So if you know this ahead of time maybe you’ll at least be able to plan or something. Also, be warned that the game has multiple endings. If you beat the final chapter in the wrong order then it won’t work out and you’ll need to try all over again. It’s not as long a replay as the others but with how difficult the bosses are, it could be a bit annoying.

So in the end what this game is missing are some quick quality of life updates. With those then this game would be even better without a doubt. The graphics are really nice and fit the game’s style. Each design is memorable and the world designs are cool. I also thought the soundtrack was pretty good. You will hear a lot of the tunes repeat themselves as it isn’t a huge amount but they’re solid which is what counts. There is full voice acting here as well and a lot of cutscenes which is a winning combination here.

It’s got a true RPG plot and a lot of the characters are great. Gwendolyn and Oswald tend to steal the show here. You’ll definitely be drawn in to the story right away so no matter how hard the grinding is, you’ll want to see it through to the end. I highly recommend this to anyone who is looking for a really fun game with a great story. The game is just very impressive and you’ll be glad that you played it.

Overall, Odin Sphere is a great game that you should check out. Just be warned that it is no walk in the park. This is a game that will test your focus and combat gameplay skills throughout the whole adventure. You won’t be able to just coast by here as you’ll die very quickly. Using your abilities at the right time and carefully approaching your opponents is absolutely crucial. Once you’ve got that down then you will really be ready. Use the first character story to get the hang of things are there are a lot more to the mechanics than what I’ve mentioned above.