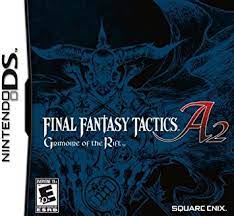 I had quite a few issues with the first Final Fantasy Tactics game. I thought the whole laws system was pretty bad because it really disrupted the flow of the game and the penalty for breaking the law was too steep. You had to reset the game a whole lot. This game was evidently keeping the laws in so I was a bit concerned but fortunately it’s all been overhauled. My issues from the first game have all been greatly reduced. I won’t say the game is without issues but when you improve the gameplay, it stands to reason that the game itself will almost always be better.

The game starts with the main guy being pulled into the world of Final Fantasy. Now he has to try and find a way out but in the meantime he’ll meet some friends and try to stop some villains. It’s a classic save the world story where at the end you figure the kid will go back to Earth. Yes, this is virtually thee same exact plot as last time. I was surprised that there wasn’t a different angle here. If anything the main character has less character than last time so I would actually say that the plot is a bit weaker. Considering that you usually play RPGs for the plot as much as the gameplay, that was a bit of a heavy blow.

I wouldn’t say the story ever really gets to be all that engaging. There are a lot of sub plots thrown in like a treasure thief who is always rather crafty so you don’t know if you can trust her. Then you’ve got the mature right hand man who seems to have a shady backstory where he may have worked with the villain group. Some interesting tales in there but nothing that really stands out. It doesn’t help that the game uses a day system with tons of optional missions so after a wile it feels like most of the game is filler. There are 300 missions in the game but I believe less than 30 of them are actually the story ones.

The majority of these missions are dispatch types which you send out your minions to go and complete. As a result there is no story to be had in those. Some are hybrid missions where you could dispatch or beat in person. If you go in person I’m sure there would be some bits of story in there but why do that when you can send your minions off? It’s a lot quicker to do it as a dispatch and just walk back and forth to have the days go by so the mission is auto completed. Tactics gameplay is always long by definition so dodging battles this way is what you will want to do.

So lets talk about the gameplay. If you’re unfamiliar with tactical gameplay, the idea is to move all of your characters across the gameboard so they can either make it to the goal at the end or attack opposing players. Everyone has a set number of tiles that they can move across and then you either attack or use an item. You win when everyone is bumped off. When the level starts you can activate a bonus like extra power but a law will then appear and you must follow it. If you break the law then the bonus will go away for the rest of the match. This is a big improvement over how it used to be. In the first game if you broke the law then your character was sent to jail and you have to break them free which took multiple fights. You had to actually fight people in order to free the captive which was no good. It was such a big waste of time whenever that happened and it’s why you would ultimately just reset the game instead of going through all of that work.

So here the law system can actually be ignored entirely because losing the bonus isn’t a big deal. It’s also one less thing to worry about because the gameplay is super detailed as it is. For example, there is a class system here outside of the level ups and you can unlock new classes by fulfilling requirements. This is really difficult and I barely unlocked any by the end. It’s definitely not for the casual players but at the same time, you will then come to a real hurdle by the end of the game because the difficulty level just spikes up. I was barely able to beat the final boss and that’s mainly because I found a cheese strategy.

Basically the boss can’t see you if you’re far enough so you have to get just close enough to hit her with arrows. She will gain full health infinitely whenever she gets too low so the trick was to get her down to about 30% health and then rush her after her turn. This way you beat her before she fully heals. Otherwise I couldn’t find a way to get around that move. Also, aside from getting full health each time she would also put a lot of curses on your characters which really made things tough. Then there’s a second phase which was also intense. I’m not confident I could win again if I had to do a rematch since it came down to the wire.

Tactics gameplay feels very satisfying to win but also very annoying to lose because of how long each round is. I put many hours into the game as a result of how long it was. I definitely advise you to do as many dispatch missions as possible to level up your crew. Whatever you can do to get stronger for the final bosses is well worth it. You need to be strong if you want to clear it.

The graphics are okay, I wouldn’t say they really take advantage of the newer gen portable consoles though. This doesn’t look much different from the GBA game and there are no cutscenes here. You’d think that this game should have some nice looking cinematics by now but it wasn’t to be. The soundtrack is also more on the bland side. I couldn’t really recall any specific tune from the game because it’s all just standard fare. The kind of music you would have heard many times before but without a nice twist.

The game does have a ton of content to get through though so no matter what price you got the game for, it will be a fairly good deal here. Outside of the main plot there are a lot of side content missions and such to complete which will further extend the timer as well. There’s no way to really speedblitz through this game on your first shot so just enjoy the full experience and have fun. It is a game that was made with a lot of effort, that’s for sure. While the story may not be all that exciting, I appreciated that the game fixed a lot of my issues with the first title through quality of life features.

Overall, Tactics 2 is a big improvement over the first one. It’s still not ready to take on the mainline games or rivals like Pokemon, but I would be up for playing a third installment some day. Lets just get a different story in one of these days. This game was on my backlog for a super long time so it feels good to finally have this one completed. Now I’m one step closer to being fully caught up with the whole franchise.

2 thoughts on “Final Fantasy Tactics A2: Grimoire of the Rift Review”