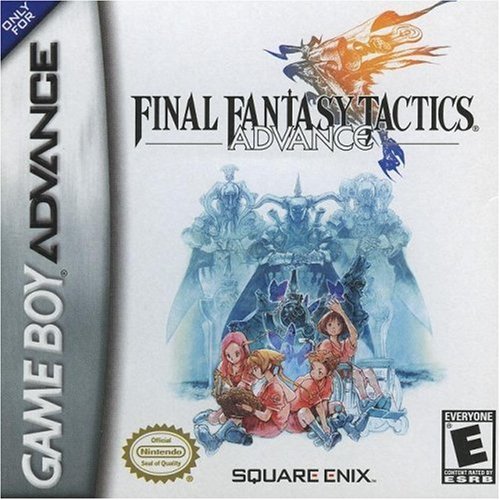 Final Fantasy Tactics Advance has to be one of the oldest games that I’ve had on the back burner for many years. It’s been patiently waiting it’d turn and now it was time to see what this game was all about. It definitely goes all in on the tactical gameplay and there’s a lot of customization here but other parts of the game have not aged well which ends up holding the experience back.

The game starts with our hero Marche having a snowball fight with all of the other kids at the school. At first glance it seems to be going okay but everyone is actually dealing with something. The kids are actually targeting his friend Mewt a lot. Marche’s brother can’t walk so he isn’t able to have fun with the gang and the main heroine Riza is very self conscious about her hair being white so she dyes it every day. There’s quite a lot of unhappiness in the air and for Marche the main point is that he’s a pushover and doesn’t stick up for himself.

Well, one day Marche wakes up only to find himself in a fantastic kingdom ruled by Mewt. It’s effectively a palace like in Persona as it is created by his wishes. Marche figures it isn’t healthy to life in a made up reality like this and he decides he has to destroy the world. The other kids are not in agreement though and will do everything they can to stop him. Can Marche finally find his inner confidence and take the win here?

Interestingly Marche can almost feel like the main villain here in some respects. Think about it, to the creatures living in this world, the place is very real. All of a sudden you have this guy showing up to try and destroy the world because he says its fake. You’d assume this guy is insane and I can see why they were all fighting against him. You also have to ask yourself on whether these guys have become sentient and in a way is Marche actually destroying everyone? If all of the monsters will revert to townfolk similar to how everyone here is a distortion then that helps with making it okay in the end but it’s definitely an interesting concept.

Not really one that the game goes into all that much but it does make you double think what you are doing the whole time. The main focus on the story though is Marche trying to convince everyone that this world isn’t better. Sure they have super powers and live a life of wealth and prosperity here but Marche says that since they know it isn’t real, it’s like they’re running away from the real thing. I thought the game did a good job of not having all of the kids suddenly agree with him or anything like that. It was handled as more of a slow burn which was good so the kids had a chance to explain their side. All in all it may not have been constant end of the world stakes or anything like that but things do get cosmic in the end and the story was fun.

As for the gameplay, it’s your classic tactics style with a few changes here. So if you know tactics gameplay then you remember that it’s all about getting the right angles. You want to attack from the sides of behind an enemy for better damage as well as a better percentage chance of hitting the opponent. You can attack, guard, use a special move, or an item. You can control up to 6 fighters here and the enemy team will typically have around as many. It’s fun to think out your moves and try to get to the win as efficiently as possible. If this was played straight with no gimmicks then there would be no issue.

The gameplay can be a little slow with all of the animations and everything being unskippable but it would still work pretty well. The main issue comes with the law system that is unique to this game. Basically when you start a level there will be a random law that says you cannot do something during the battle. Sometimes it will be that you can’t attack, can’t heal, can’t use fire, etc. As the game goes on there will be 2 laws at once and then three. The big issue with adding RNG into the mix like this is that you can’t just make a plan and stick to it. You have to adjust your combat based on the law for the battle and there is no way to see it before starting the level. What that means is that if it’s a law you can’t hope to overcome then you have to reset the game.

After that you can walk around a bit (Since each step counts as a day and switches the law) and then head back. It’s quite a few extra steps that aren’t needed. Additionally there are random minions running around all the time and if you bump into one then you have to start another long fight. The level up system is also a bit different than the others as each action gets you some XP rather than a total at the end of a level. This is fairly unique for RPG titles but for tactical fighters I’ve seen this in the past so it makes sense. It’s not my favorite style but it is what it is.

There’s also perma death which is active on any desert level. If any of your members dies here and you don’t revive them before the match is up, the member is lost forever. There goes your equipment and level ups. I’m not a fan of perma death in any game. It’s way too harsh and just serves as a big punishment if you end up losing. There’s also a jail system here in case you break the laws in a level. Two strikes takes you to jail while one acts a a fine and your character suffers a penalty. To remove the card you have to play a few battles without the character but at the speed in which the battles are, that’s a fairly long commitment so it’s often better to just reset the game whenever you do that by mistake.

Then you’ve got some quality of life features that aren’t present. One of the big ones is that it’s very difficult to see which equipment is the best one to attach to your character. You can only see the stats for one piece at a time and can’t compare it so you have to remember the numbers as you check each piece one by one. That just seems like something which should have been easier. It’s also odd that you have to actually set the items to your character’s ability slots or you can’t use any at all. I think that’s a bit much and there’s no indication of when they have learned a new ability so you have to manually check everyone every time there’s a level up. Same with ability mastery to learn new classes.

So what I’m saying is the gameplay is held back by a whole ton of features ranging from just about every area you can think of. It’s definitely a problem. The graphics are good though. I thought the character designs were on point and the levels were good. Meanwhile the soundtrack was more on the unimpressive side as none of the tunes were all that good. It was going for a rather calm feel to it but give me rock or metal any day so I can really feel the tunes at all times.

As for the replay value here, there are a ton of missions to complete so that’ll help on that end. There are 300 missions in the game and you’ll probably end up beating around 100 before you finish the game. The missions have several categories including combat and dispatch. Dispatch missions are ones your allies will complete on their own and either take a few days or just some extra battles without you. So choose who you send out on a mission wisely since you never want to be without your best fighter for very long.

Overall, Final Fantasy Tactics Advance would be one of the weaker Final Fantasy games. It has some pretty good ideas and so the story ends up being the strong point here but the gameplay mechanics are what ended up bringing it down. If anything the game’s just trying to be too intricate and having way too many things going on at once. We’ll see if the sequel can dial things back a notch, removing laws entirely would definitely be a great start. If not, maybe there’s a way to just make them better. This is a really long game so make sure you really enjoy the tactics style before picking it up.