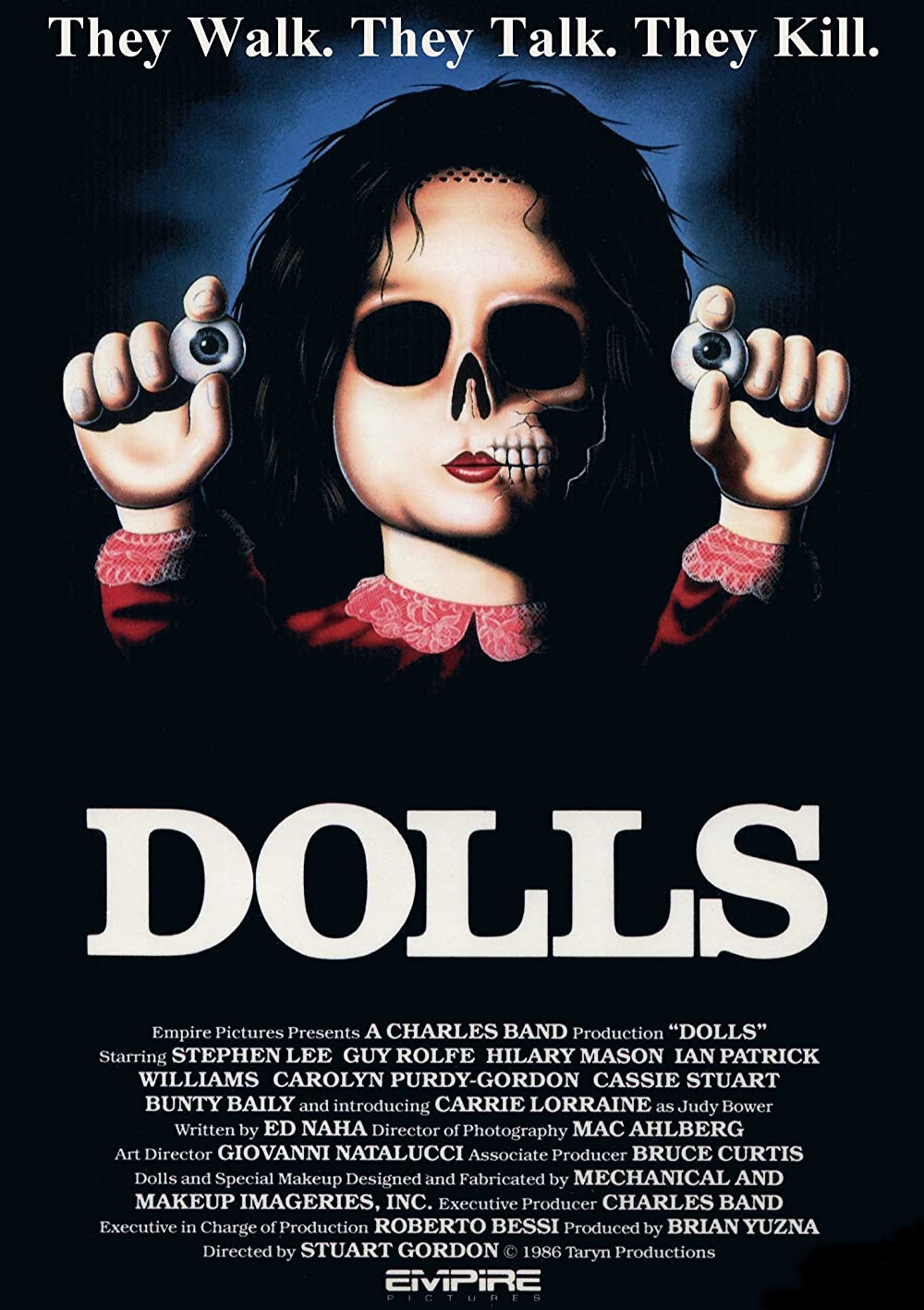 Dolls is one of those films where you figure the main characters are going to be doomed but the question is…how doomed? Will they be able to put up a fight or are they doomed right out of the gate? In the end I wouldn’t say the Dolls are the strongest horror villains as the humans can put up a fight but it’s fair to say that they’re still a solid threat. This is a horror film that’s mostly going through the motions, I wouldn’t recommend it but the novelty of evil dolls is always intense.

The movie starts off with one of the meanest families getting stranded as their car goes in the mud. You have the stepmother Rosemary who can’t stand her husband’s daughter Judy and makes no secret of this. Rosemary wants to send her off to boarding school and insists on being mean for no reason. Then you have David who is so desperate for Rosemary’s attention and devotion that he will basically grovel and will take her side against Judy’s every time. Finally you have Judy who has dreams of the parents getting eaten alive by her teddy bear. So these 3 have a whole lot of issues but at least they have a place to sleep now.

See, there’s an abandoned mansion owned by a senior couple named Gabriel and Hilary. They don’t mind having company for the night. The family is soon joined by the two hitchhikers they nearly destroyed while driving to the mud patch as well as a guy named Ralph who is being manipulated by those two. Ralph seems like the only decent adult here so will he be able to escape the wrath of the dolls or is it too late? One thing’s for sure, nobody is going to be having a very peaceful night here.

Now you may be wondering…how can you lose to a bunch of toys? Well, in some cases it’s really the surprise factor. When the toys have already stabbed you before you’ve begun to fight then it’s difficult to do much. For example I wouldn’t say Rosemary had much of a fighting chance from the jump. As the meanest character in the film you figured that the movie was definitely going to cook something up for her. Being mean pretty much never pays in a horror film. Often times nice characters will die too but they tend to get off a little easier at least.

Then for Isabel and Enid, they’re petty thieves who don’t mind stealing from old people so of course things aren’t going to go well for them. Isabel’s death goes more into the surprise factor but Enid plays this one quite horribly. Okay so you’re outnumbered by the toys but you do have a flaming weapon plus you’ve had time to adapt which is more than most of the other characters got. So now you can plan a proper counter attack and start taking these guys down right?

Well, she unfortunately forgets the basic rule of combat which is that if someone is pointing a gun at you then you need to get out of range. She already knows that the toys are real so why stay in front of them like this? I thought the scene was a bit annoying because she had already taken down so many of them, only to freeze up at the absolute worst time. That was not the way to go about things, not at all. Big mistake on her part and it cost everything.

As the only real decent character here, Ralph’s a solid guy to root for. He has to deal with a whole lot and he’s a bit too naïve at times but at least he means well. Ralph does his best to protect Judy and while he is really slow on the uptake, it all eventually makes sense to him. I did think a scene near the end wasn’t handled well though as it comes across almost as if Ralph was trying to instigate the villains to attack him. Just go away while you’ve still got your life in tact. Why are you trying to make this into a bigger deal? I thought that was nearly a big miss for him so he got lucky…in that scene at least.

As for Judy, well you can cut her a lot of slack next to the other characters because she is still a kid. I’d say that has to count for something after all and she does try to talk to the toys a little. She did well in evading her father as well since that nearly got tricky for her. She does apparently lie a lot which is part of what makes this situation tougher for anyone to believe her so I like to think that her lying days are over now.

As for Gabriel and Hilary, I thought they were fairly interesting. They’ve certainly got grand ambitions but I wouldn’t say they are perfect ones. For example, if you’re trying to go the sympathetic route with them then shouldn’t they have more control over what the dolls do? They nearly bumped someone off who wouldn’t have been on their hit list all because the dolls have such a mind of their own.

By the end of the film it’s left fairly vague on exactly how this works. I assume the toys are on semi automatic where they work to accomplish the old couple’s goals but have some personality and control over themselves. If that is the case, I’d say that Gabriel and Hilary need to tighten the reigns just a bit or it’s going to go against their goals in the end. It sort of defeats the purpose if they’ll just destroy anyone who goes into the house. It’s an interesting dynamic though so it could be interesting to learn more about the villains some day.

At the end of the day what holds this film back is what holds most horror films back. It can be quite violent. Most of the deaths are definitely trying to be as gruesome and painful as possible. These dolls are absolutely not the kind of villains to give you an easy death. In part this is because of the size but expect to be shot and stabbed numerous times before going down. Each death takes forever and the way one of the girls dies is particularly gruesome as it’s like she is early on in the process of being a toy and so it all looks off with the eyes and everything.

Overall, Dolls is not really anything special in the slasher/horror genre. I dare say the dream near the beginning should have been real as it would have been such a crazy start to the adventure and would have switched things up. Realistically it wouldn’t have helped the score all that much though. I did appreciate the twist ending as it reminds you that some cycles are not too easy to break or stop. Things will just keep on happening over and over again. If this is your kind of film then you may as well jump on it but otherwise you can probably guess whether you’ll like the film or not right from the poster.