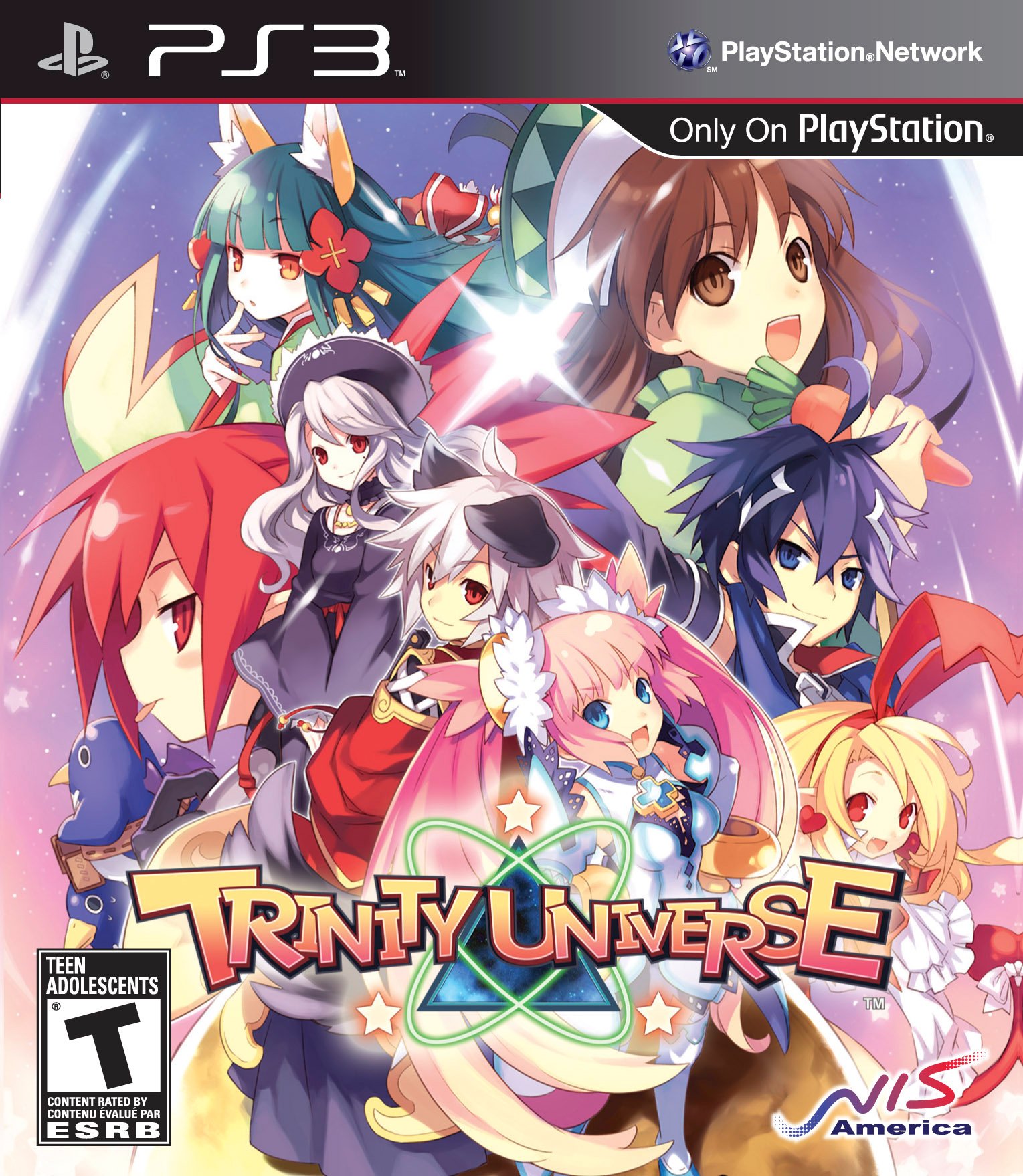 Trinity Universe is a game that I had on the backlog for many years. It’s a long visual novel/rpg title so I had to wait for a good opportunity to check it out. Well, the future is now as they say and I finally got to take it out. This is definitely a game that has a high difficulty level so be prepared to grind a whole lot if you want to make it to the end. Fortunately the level ups come quickly and there are a ton of mechanics involved here so eventually you’ll be in a good spot.

There are two story modes here but I opted to play Kanata’s story. He’s known as the Demon Dog King and he has decided to rebel against his destiny. See, he was supposed to become the Demon God Gem but doing so would mean that he would lose his humanity and become…well a gem. So instead he wants to be a great adventurer and figures he can save the planet another way. Becoming the gem would have stopped the countless falling objects from obliterating the Netheruniverse but he figures he can stop them one at a time instead. Doing that would allow him to keep his humanity while also having a lot of fun. It’s the best of both worlds you could say but of course that means everyone is after him now.

It’s a fun story but the game doesn’t take it all that seriously. At its core this game is still part parody so the characters break the fourth wall and there are some jokes about the budget and everything. I wouldn’t say that any of the characters are all that great either. For the most part they’re good but if you pit them against any other RPG they’re probably getting taken out pretty easily. The humor is mainly the characters repeating their gags over and over so it doesn’t have the same energy and focus as a mainline Disgaea game. Now those would really have a lot of great dialogue throughout.

I also think they could have done a little more than the simple character portraits for all of the dialogue. A little movement or animation would have been nice but this is something that mainly comes with the genre/territory so I can’t go in too hard on that. The graphics look pretty nice once you’re actually playing the game so that’s definitely a plus. Meanwhile the soundtrack is a lot of fun too. I think they could have had more variety in the hub world though since there is only a single track that just plays on loop over and over again.

Fortunately the dungeons have a lot of solid themes. The encounter theme is good and there’s a solid rock one for the bosses. A good soundtrack is always important for these things. The game is also fairly long so when you mix in the difficulty level then you know that you will be here for quite a while. The gameplay mechanics are a bit complicated so it’ll also take you a little time to get those down. Don’t expect that you’re just going to wake up and start cranking out those wins.

So the main flow of the game is that you’ll watch a few events and then you’ll head into a dungeon. You run through the rooms as minions attack you until you get to the boss at the end. Beat him and the chapter will usually end before taking you to the next one. It’s a fairly straight forward approach but my advice is to always save when you go back to the hub world. Sometimes an event will trigger an instant boss fight instead of waiting for the dungeon and you don’t want to be caught with your guard down. Now that would be tricky.

Once the battle starts, the game becomes a turn based title. You have a certain amount of energy that you can use for different moves. Lets say you have 50 energy. Your standard attack takes up 10, special takes 12, and your power blow takes 15. You can use any variation of those until you run out of energy or skip your turn so next time you start with 100. The benefit to skipping your turn is that there are several combinations which turn into combos and deal mega damage. For example, 5 special attacks in a row would cost 60 energy but it would trigger a combo. Personally I always skipped a turn with all 4 players and then launched into big moves.

You can look up some combos on the pause menu but a lot of them don’t show up so just memorize them as you play through the game. You can also press R1 to try and launch a team combo right when you’re running out of energy. You then have to press the right button while the meter is in the green which can be surprisingly difficult. This only triggers if you’ve landed multiple solid combos already. There’s also a final smash with R3 but that one is tougher to use because it doesn’t always work. Once you’ve started one attack, the energy starts dropping automatically so make sure you don’t take too long to think.

This is just the tip of the iceberg. There’s a lot more to it but you can see how this game is really detailed the whole time. When you’re not battling you want to grab as many minerals and resources as possible. These are later used to synthesize new weapons and equipment. Those are super helpful so you’ll want to have them. The game does suffer from missing some quality of life features though like being able to directly compare the stats to something that you already have so be prepared for pausing and unpausing the game a lot.

Once you reach chapter 11 then you finally get the meteorites which is super helpful for grinding. The best thing to do is to grab a bunch of the ones that increase your souls so that you can beat one enemy and get 99 souls. Leverage that into creating a monster that will drop an AttackX3 which you can use to increase your attack power by close to 500. Rinse and repeat with every other stat until your guys are absolutely overpowered. The stat increases are way better than leveling up which is probably why the game locks them until the very end of the game.

This is a game where you will want to write a lot of notes or just look up a guide on the best places to grind and where each mineral spawns. Otherwise you’re going to have a tough time finding what you need and that can take a while. Also, be warned that the game does have a “dark” ending if you haven’t done enough. Based on the text it seems like you’re supposed to clear a bunch of side missions which I never really bothered with. It certainly makes for a unique ending though, that’s for sure. I wasn’t expecting things to play out the way that they did at all so it really took me by surprise.

As for the story, well it boils down to fighting Rizelea a bunch of times before finally uniting against a common threat. It’s a classic kind of plot that works well enough but the game is just going through the motions most of the time. As a lead Kanata is okay but rarely knows when to actually get serious. He’s also so strong that almost nobody is a threat to him. Rizelea is fun though and probably one of the highlights here. You can always count on her to steal the stage when she appears and get everyone to focus up.

Etna is always fun for just how over the top evil she is. She makes it quite clear to the others and to the audience that she is still a demon through and through. Flonne’s role here is interesting as she’s still in her more evil appearance from the end of Diagaea. I thought that was a nice nod to the continuity and it’s fitting that the guest characters would be some of the best here. Lucius is the dark hero and has a cool voice. I like the concept behind his character. He may not do a lot but he always talks tough which is appreciated it.

Tsubaki is incredibly loyal to Kanata and always takes his side even if she doesn’t agree with it. I suppose you have to admire her loyalty but sometimes it can hurt her character as I would like her to call him out more. Throughout the game she is hinting at some kind of secret plot but that doesn’t really go anywhere so either it’s in the true ending or was for a sequel. Finally you have Mizuki who tries her best to be the very hyper heroine but often falls flat. Half the time there is nothing for her to do so she’ll just make a random comment. The game’s very self aware about this and so I would say the concept behind her character was better than the execution. The script in general for the characters could be fun at times but really could have benefited from more actual animation.

Overall, Trinity Universe is a fun game. Mainly it’s solid because of the gameplay and how much effort went into that. It does come to a point where I think the game overcomplicates some things and could have gone for a more simple route but it’s still fun. The story also holds it back from taking the next step to an 8 because it can be a bit repetitive and never gets quite as emotional or intense as the average RPG. On that front it just can’t keep up but you should still find the characters amusing enough. I do give the title props for being almost fully voice acted even with so much dialogue and characters here.